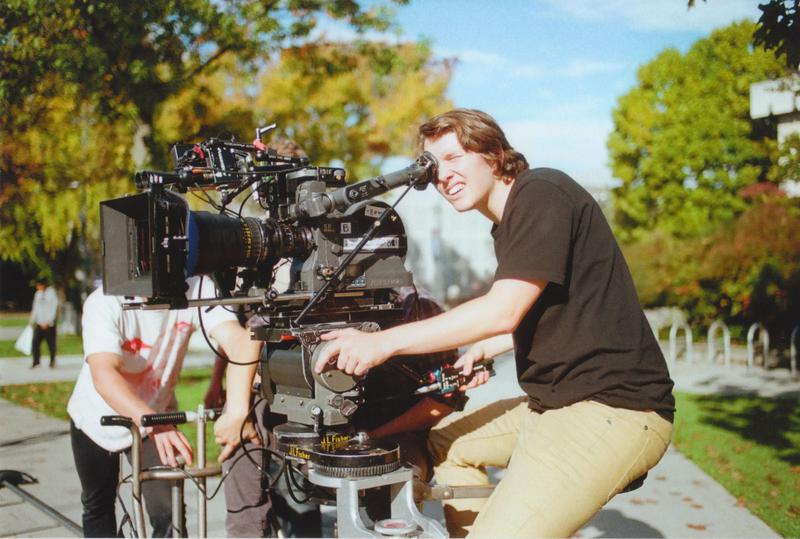 The film intercuts the main story with documentary-like interviews of two additional characters who recall similar relationships in their own lives. Photo courtesy Nephew.

Later this month, a short film written and directed by David Findlay, a recent graduate of the UBC film production program, will have its premiere at the Vancouver International Film Festival (VIFF).

The short, titled Nephew, follows a young man (Eric, played by Noah Cohen) as he decides whether or not to reconnect with an estranged uncle (Yves Jacques) after having seen him at a bus stop for the first time in many years. The film will screen as part of the “Blood is Thicker” program at VIFF -- a compilation of short films that, as its title suggests, will explore the shifting bounds and bonds of familial relationships.

The idea for exploring an avuncular relationship in particular came from Findlay’s own experience of re-encountering his uncle at a funeral two years ago for the first time in over 10 years.

“When I met him, it was really strange because I thought, ‘This guy is a total stranger, but he looks like my dad and he looks like me ... I can totally sense the familiarity,’” said Findlay on the experience.

Not long after the meeting, Findlay wrote the script creating a scenario that doubled as a personal fantasy of sorts and a way of exploring that particular relationship.

“Ultimately I wanted to make a film about family but from a different perspective that I don’t think we’ve seen a lot in movies,” said Findlay. “Where parents obviously have responsibility towards their kids, an uncle or an aunt doesn’t have that … But either way, it’s like a big influence on who we are.”

The film intercuts the main story with documentary-like interviews of two additional characters (played by Louise Portal and Philip Wrangberg) who recall similar relationships in their own lives. Aside from complementing Eric’s own predicament, the interviews also manage to disarm by the virtue of their candor creating a bracing intimacy within the film’s universal themes.

Aside from getting the support of Panavision in order to shoot on 16mm film -- an increasingly rare occurrence, especially for younger filmmakers -- Findlay and his collaborators also looked to Kickstarter to fund post-production costs. They successfully raised about $6,300, over a $1,000 above their goal.

The short also stars Yves Jacques and Louise Portal. Both are well-known Quebecois actors that Findlay recalls seeing on TV and in films while he was growing up as he was raised in Quebec City himself.

“Being on set working with these great actors … It felt like my first real filmmaking experience.”

Findlay had always been interested in making movies as well as snowboarding and skiing films when he was in high school. But it wasn’t until he took a film studies class with Mark Harris, a UBC professor who passed away two years ago, that he began to seriously pursue film production.

“Taking his class was like, ‘Oh wow, this is what I want to do,’” said Findlay. “And since first year university, that’s all I’ve been involved in -- producing and making movies.”

Before beginning work on Nephew, Findlay helped produce Light, a short film that premiered at TIFF last year written and directed by Yassmina Karajah (also a producer on Nephew). As Findlay looks forward to the VIFF premiere of Nephew, he is currently working on a script for his first feature film while also preparing for production on Karajah’s next short film.

“After making enough short films, you just have to go in with a mindset of equating success with [the] completion of a project,” said Findlay. “Because if you think success means a bunch of festivals and awards and whatever, it can be pretty tough to find the motivation to do the next thing.”

Nephew screens as part of the “Blood is Thicker” shorts program on September 29 and October 6 during the Vancouver International Film Festival.