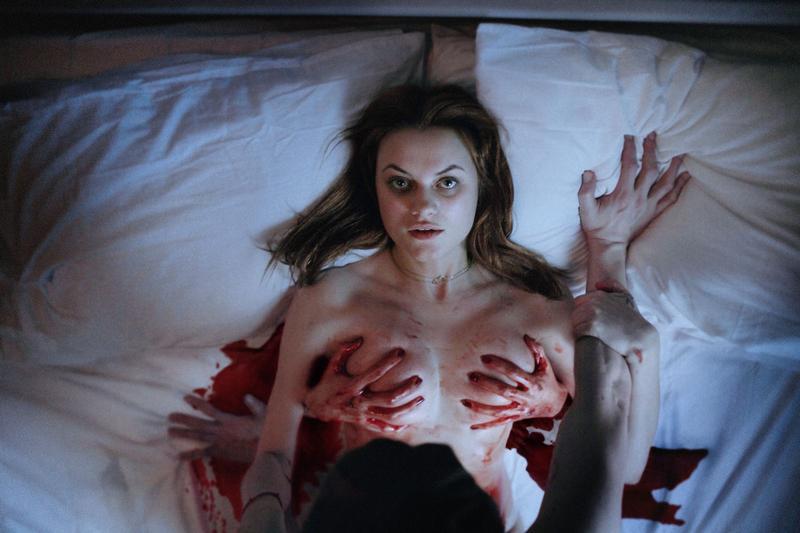 The comedy-horror film has been described as "bloody disgusting."

Everyone has skeletons in their closets, but Nina Forever's Rob (Cian Barry) and Holly (Abigail Hardingham) have a corpse in theirs. When Nina (Fiona O’Shaughnessy) dies in a car accident, Rob, her aggrieved boyfriend, attempts suicide. Subsequently, Rob begins working at a new job and meets Holly who is attracted to Rob’s melancholy past. The two begin a relationship, but when they tumble into bed together for the first time, an undead Nina appears from under the sheets to join them.

As it turns out, Nina appears every time Rob and Holly try to get it on. Her gruesomely mangled and bloodied body stains the sheets as she lays limp beside the couple as they try to make love. She makes sarcastic quips in a voice turned into a sexy rasp by a shard of glass that’s lodged in the back of her throat. Hilarious and dark, the Blaine brothers do horror with a wide grin — deadpan humour and situational irony abound.

For a while, Rob and Holly seem to be content changing the sheets every night, but eventually Nina’s presence begins to grate on their relationship. Thinking that Nina is hanging out in the world of the living because she doesn’t want Rob to forget about her, Holly gets a tattoo to match Rob’s which reads, “Nina Forever.” When that fails to kick her out of bed, Holly redecorates the apartment. But much to the couple’s dismay, the more they try to push Nina out of their life, the more she seems to stick around.

The presence of Nina seems natural and necessary — never campy. A simple colour palette and uncomplicated cinematography keeps Nina Forever from feeling like a true heart-pounding horror flick and more like a romantic drama. Although the couple is bathed in Nina’s blood during the acts, their nonchalance towards her ghastly presence — aside from exasperation — keeps the atmosphere uncanny rather than uncomfortable.

Although the film plays on horror genre tropes, its undercurrent is serious and reflective. The underlying themes of grief and coping with loss come through Rob’s interactions with Nina’s parents who are are coping with her loss by holding on to him. Of course, there are the issues of closure and letting go. Nina’s physical manifestation is a representation of Rob’s inability to let go of her and brings into question what it means to never forget someone. Like a Brother’s Grimm fairytale, Nina Forever is effective because it is both a grisly fantasy and a study on human nature in light of love and death.