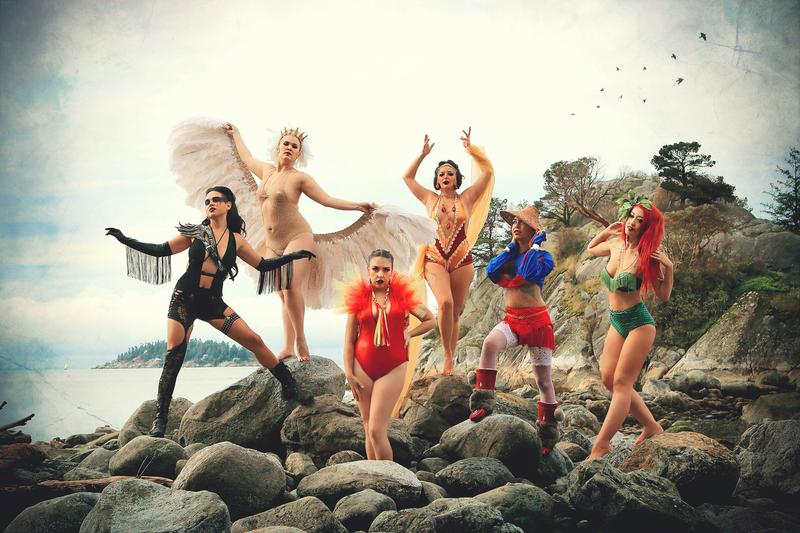 Virago Nation is a group of female warriors who are challenging stereotypes about Indigenous women and sexuality one burlesque performance at a time.

The six members of Virago Nation were all burlesque performers in Vancouver before they decided to form the all-Indigenous group in May 2016. Their upcoming performance will be on February 1 at the Museum of Anthropology (MOA), as part of the Night Shift cabaret series.

“What was interesting was that when we first got together, the intention wasn’t necessarily to be a group that performed together — it was just to do cultural exploration,” said performer Sparkle Plenty. “We felt disconnected with our culture because we lived in the city.”

After it became apparent that they were not the only urbanized Indigenous people looking for a way to get connected, they decided to take action.

“[We wanted to] make a platform to start talking about how it is important to create space for indigenous people to learn and to explore their heritage,” Sparkle said.

“[The name] Virago really resonated with us because the definition that we saw was female warrior,” Sparkle said. “We find as women in general, you’re constantly fighting and then [you] add another element like race or being Indigenous.”

“With a lot of the discussion in the media about the missing and murdered Indigenous women, there’s almost a victimized [perception of us], like Indigenous women [have a] certain fate.”

Virago Nation is seeking to disprove this perception.

“Indigenous women are really resilient,” Sparkle said. “They are the matriarchs, they are the leaders of their household, and we really wanted that to be part of our identity with the name Virago.”

Burlesque is an art form that is sexual in nature and therefore comes with the perceptions of beauty that society has imposed on it. Virago Nation shows that women do not have to conform to conventions in order to feel beautiful or to love their body.

“I never thought that I would have that platform to really showcase myself as a sexual being or that I would ever be accepted as one because I don’t have the body type that you often see in music videos or in magazines,” said Sparkle.

“[Performing burlesque] was just a really exciting opportunity to give the finger to what society decided was sexy.

“It’s important to have that demographic on stage where you see someone who looks like you up there doing something and you realize ‘hey wait, I can also do that, I am a beautiful woman, I am allowed to carry myself in a way that earns respect and love. I can decide that I can be a sexual being and not be shamed for it.’”

Despite this, society still has a long way to go.

“There’s still stigmatization of women choosing either performance art of a sexual nature or work of a sexual nature,” Sparkle said. “I know that [for] many burlesque performers, parents won’t accept them because they’re ashamed of the fact that they take their clothes off in front of an audience, that they’re becoming strippers.”

The ladies of Virago Nation are not afraid to challenge this stigma and to make a political statement.

“Just the fact that a woman is choosing to be sexual is political, bottom line,” Sparkle said. “So just doing burlesque is political.

“The fact that we are doing it on our own terms means that we are the artistic directors of our own act, we are the creators of costumes, create our own concept, we put together the music.”

Sparkle spoke of how there’s still a very narrow representation of Indigenous women in contemporary culture, and how they are often reduced to stereotypes through things like Halloween costumes and sitcoms.

“We decided that we wanted to change that narrative and show that Indigenous sexuality isn’t a stereotype — it’s us, we’re performers, we are proud of our heritage and we’re proud of being sexual beings and we’re going to showcase that,” she said.

It’s especially exciting for Sparkle to showcase this within Indigenous art communities.

“People are going to wonder how we fuse indigenous art with burlesque,” she said, “and it’s like 'well we’re indigenous and we’re performing burlesque.’”

They performed last year at the Talking Stick Festival.

“A lot of it is for us,” she admitted. “But it’s letting other Indigenous women especially know that it’s okay to love your body and to show your body and to feel comfortable in your sexuality and to be a sexual being.”

The MOA Programs Curator April Liu spoke of how exciting it was to be able to work with the troupe.

“What they’re doing with re-matriating Indigenous female identity, reclaiming their bodies, challenging female stereotypes, all of those things are so important to talk about right now,” Liu said. “I really admire that they’ve taken up a difficult topic with such creativity and style.”

Through the Night Shift: Untamed cabaret series, Liu’s goal has been to challenge the colonial legacy of the museum as an institution by using it for community building.

“Inviting young Indigenous people to come and take over the space is so important,” she said.

Sparkle has been in charge of curating the upcoming event. A catwalk will be set up in the great hall and DJ Kookum will be providing the music for the show.

“I’m excited to just share what our art looks like and what Indigenous sexuality looks like through our lens with the Museum of Anthropology audience,” Sparkle said. “It’s just being amongst all that art, and getting to share this other side of art that’s a little more sexual. Some of the acts are going to be cheeky, some of it’s going to be a little dirty.”

Virago Nation will be performing at the Museum of Anthropology (MOA) on Thursday February 1.