In 1947, “Chick” Turner was a sports editor for The Ubyssey. UBC Archives

On September 19, 2020, former Prime Minister John Turner passed away at the age of 91. The 17th Prime Minister served for a mere 79 days in 1978 but was at the forefront of many of the biggest political moves of the modern era.

Turner, who was often referred to as “Canada’s Kennedy” or “the golden boy,”  was the Justice Minister when homosexuality was decriminalized (the same bill that legalized abortions in certain situations) and the 1970 enactment of the War Measures Act, which paused civil liberties in response to the October Crisis. He went on to become the finance minister during the oil crisis. Turner eventually stepped in as Liberal Party leader and served as prime minister following Pierre Trudeau’s resignation. His term as prime minister is the second-shortest in history.

But before he was sitting in the prime minister’s office, Turner could be found in The Ubyssey’s. In 1947, “Chick” Turner was a sports editor for The Ubyssey. According to Ubyssey alum Tom Hawthorn, he was a teenage sensation.

Turner ran the popular “Chalk Talk by Chick.” According to Hawthorn, “he wrote in a peppy style featuring malt-shop jargon where a university student became a ‘collitch joe’ and a downtown swimming pool was the ‘Beach Street Reservoir.’” 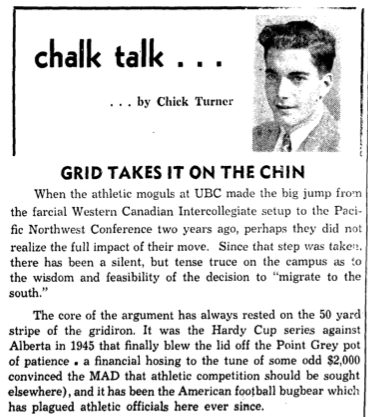 According to Hawthorn, “he wrote in a peppy style featuring malt-shop jargon where a university student became a ‘collitch joe’ and a downtown swimming pool was the ‘Beach Street Reservoir.’” UBC Archives

Others remember him fondly as well.

Rest in peace to a fellow @Ubyssey alum, and the only one to be Prime Minister (so far) https://t.co/nRpAvndRnJ

The next year, “Chick” left student press behind in pursuit of the Olympics. Turner came to UBC as a swimmer but was scouted by the track team during a Beta Theta Pi touch football game.

He would go on to become one of the fastest track stars with sights on the 1948 Olympics. He likely would have made it to the world stage had he not suffered a career-ending knee injury.

In 2004, Turner was inducted into the UBC sports hall of fame.

After his time at UBC, Turner obtained a law degree from Oxford as an “Jargon-Jaded Pubster New Rhodes Scholar.”