Our Campus: Nafeesa Alibhai tries to deconstruct colonialism in their climate activism 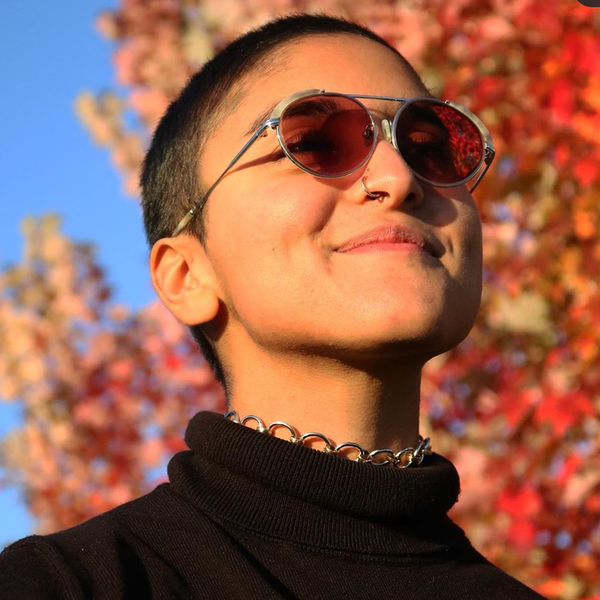 Nafeesa Alibhai’s drive to fight for climate justice started in their third-grade classroom in Calgary.

Alibhai, who is just a thesis away from graduation, is currently the UBC Climate Hub’s student Director.

In grade three, during an assembly, they were taught about water usage and eco-friendliness. Alibhai remembers becoming serious about cutting down on water usage after the lesson.

Alibhai used to sort through all the plastic for their family to make sure it was going in the correct bins. They took short showers, bought secondhand and avoided fast fashion because they believed that individual action was the best way to mitigate the climate crisis.

Around the end of high school, Alibhai realized that individual contributions could only do so much to help mitigate climate change.

“I started reading more news and watching more documentaries. I think the first one I watched ... was about how nations like Canada and the USA collect all this recycling and then just send it to other nations like China, Bangladesh [and] India,” said Alibhai. “I was like damn, why am I storing all this recycling [if ] it’s just gonna go in the garbage.”

In the summer of 2020, Alibhai was angry with the government’s handling of the pandemic and with the hate and blame that was being placed on Asian communities and students with regard to COVID-19.

“I was getting really into watching the House of Commons whenever the House was in session. [I was] just watching the debates and all of that and learning more about what was going on and just getting really angry,” said Alibhai. “And then I went to the Climate Hub’s dialogues series and I just found a totally different environment. It was like, ‘Okay we’re still talking about these issues but it’s with a lens of hope.’”

During a discussion led by UBC Climate Hub as part of the Climate Teaching Connector program, Pablo Beimler, a member of the Hub and the current academic engagement lead, messaged Alibhai and asked if they would be interested in meeting with him. The next week Alibhai and Biemler met at 7 a.m.

“It was like, ‘Wow I must really care about this, I woke up for a meeting at seven o’clock in the morning,’” said Alibhai. “And thenfrom there, I’ve just been just full steam ahead or full electric engine power ahead.”

Since then, Alibhai has centred the deconstruction of colonialism in all their work and when it comes to the climate, they believe there is no other way to do it. Alibhai believes consultation with Indigenous communities is vital, but it’s essential to avoid asking too much of Indigenous peoples and communities — especially when you can educate yourself through literatures.

“You want to get things right so you want to ask someone, but that’s also unfair labour to put on someone who [has] probably written it down somewhere, and often that’s the case,” said Alibhai.

As student director of UBC Climate Hub, nobody is Alibhai’s boss. Well, except the student body to whom Alibhai is accountable, which makes student engagement their central focus. Alibhai is involved in many projects for the hub, but the project that is closest to Alibhai’s heart is the Climate Justice Workshop Club which looks to tie together issues around climate change with social justice. The workshop should roll out by September.

Tying different forms of activism together is important to Alibhai because “solutions are always intersectional.” Alibhai believes the way police in Toronto treated unhoused community members during the recent tent city eviction foreshadows the future treatment of climate migrants.

Staying positive during a climate crisis may seem difficult, but Alibhai says that their activism makes them positive, as it makes them feel they are making a difference.

“I think actions are a great salve for despair, and so just seeing all the work that people are already doing makes me hopeful, you know? I’m 21, and there have been people working on this for like 50 to 60 years, and Indigenous Nations and peoples have been doing this stuff since time immemorial,” said Alibhai.

How to avoid burnout

Alibhai says that UBC Climate Hub builds in ways to help stave off burnout in leadership, but they also discussed some of their own ways of avoiding burnout — this included hanging out with their cat, biking (because they hate walking), having sex and getting in the water.

Alibhai bought a wetsuit to swim in the frigid Pacific Ocean during the winter months. For them, being in the water is a religious experience that helps them talk to God and reconnect with the land — which further fuels their passion for climate activism.

But Alibhai’s relationship with God has not always been simple. “I’m Queer and non-binary, I’m still figuring out which term I like for myself but yeah, Queer and non-binary for now is good. And like a lot of that has not been super accepted within the religion that I grew up in,” said Alibhai.“And it’s important to note that’s, not just like Islam in general. It’s this Western colonized version of Islam that we’re dealing with right now.”

Alibhai has been able to reimagine their relationship with God to support their gender identity and climate activism.

“I have been thinking a lot about my relationship with God, with this like loving energy, and the land as well,” said Alibhai. “That’s how acting in accordance with being on stolen Indigenous land comes back a little bit. In Islam, or the sect of Islam in which I was raised, we believe that there’s God in everything and everyone, so we have to be respectful and do what’s right.”