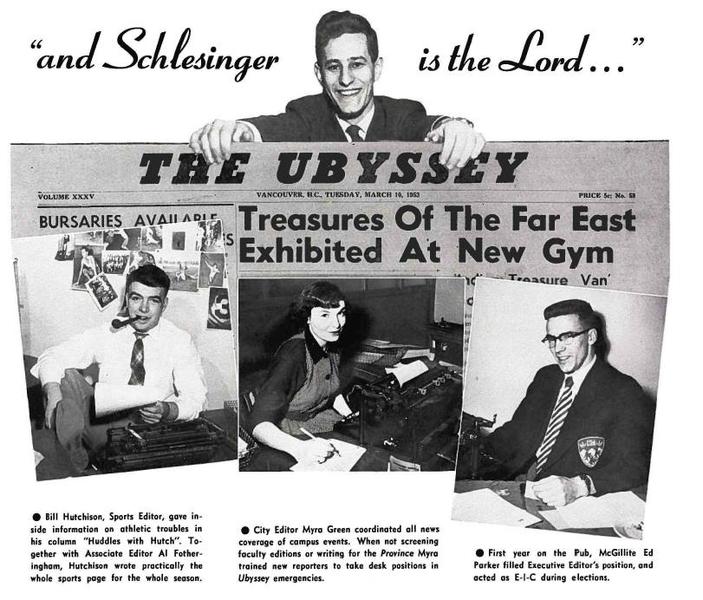 “That feistiness and the freedom, the privilege of being free even to make a fool of yourself, were infectious." Totem 1953

Last week, The Ubyssey said farewell to one of our greatest alumni.

Joe Schlesinger passed away last Monday at the age of 90 following a long illness, according to the CBC where Schlesinger was a correspondent for 28 years.

As a lead reporter on The National and later chief political correspondent, Schlesinger covered some of the most momentous events of the century. He was in Vietnam during the war; visited Mao’s China; covered the ousting of the Shah in the Iranian Revolution and was on the scene as the Berlin Wall fell.

Eventually, in 1991, he would return to his home of Czechoslovakia to witness the Velvet Revolution.

To his viewers, Schlesinger was the news.

And it all started, more or less, at a dinky student newspaper.

As a youth, he fled Hitler’s occupation of his home of Czechoslovakia and narrowly survived the Holocaust. After the war, he began working for the Associated Press in Eastern Europe — but the Soviet occupation forced him to flee once again.

He joined his brother in Canada and began studying at UBC. There, in his own words, he “sort of wandered into the student newspaper,” and fell in love with journalism.

His first byline was a fairly mundane story in 1951 about a student committee seeking more federal funding. Before he knew it, he was running the place.

Like countless Ubyssey editors before and after, Schlesinger caught the bug, and he caught it at a paper that, in his own words, was “irrepressibly irreverent and disrespectful of authority.” (It still is).

“We covered frosh festivals, pool dunkings, homecoming parades and other antics of post-puberty initiation,” he wrote in his memoir.

Schlesinger’s contributions to this paper differed in tone. In 1951, he helped pen a letter to a Russian daily paper with a proposal for world peace. The next year, he wrote an editorial where he referred to then-U.S. President Dwight Eisenhower as “the Atom Bum” in a column.

Other times, his targets were not so grand.

“That feistiness and the freedom, the privilege of being free even to make a fool of yourself, were infectious,” wrote Schlesinger.

Bringing the world to us

After The Ubyssey, Schlesinger became one of the country’s most iconic journalists. He worked at The Province, later leaving Canada to work in London and Paris, and then to Iran, Vietnam, Czechoslovakia and Germany as a foreign correspondent for CBC starting in 1966.

Over time, Canadians saw him as a gateway to the outside world. Whenever something happened abroad, it was Joe Schlesinger who delivered the news home.

“Because of his past experiences, I think Joe had a special relationship with world events,” said Louis deGuise, who worked with Schlesinger at the CBC as a camera person, recalling a time Joe started a story on the Velvet Revolution in the kitchen of a family planning to attend the parade that day. “So when we did a story, he always personalized the story.”

It was his curiosity to seek out the “little stories that make up the big stories” and his grit that deGuise recalls vividly from their time spent together covering events from the fall of communism in Prague to the Gulf War in Kuwait.

When most families had fled and journalists had withdrawn from Kuwait, deGuise and a then 65-year-old Schlesinger were taken in by a family that had stayed, and found themselves sleeping on the floor without electricity, running water or much food. But deGuise never heard Schlesinger complain once.

He called it “the heartbeat of the story” — the things that could make us, the viewer, care so deeply for faraway people that we would never meet ourselves. It’s a style and philosophy that CBC veterans say still defines their work today.

“That’s the real legacy of Joe,” said Anna Maria Tremonti, host of CBC’s The Current. “Joe’s legacy lives on in those of us that emulate what he was doing, which is finding that humanity.”

Tremonti met Schlesinger early in her career when he was already a titan of the industry. But he never acted like it. For years, he was an unofficial source of sage advice for journalists of any level (or from any outlet) that needed help.

“Everyone says something nice when someone dies,” said Tremonti. “But I think it’s telling that people always said nice things about Joe Schlesinger.”

Of course, Schlesinger first caught the journalism bug at this paper, where he was something of a rascal. It's clear that never stopped.

After serving as editor-in-chief, he temporarily resigned to run for AMS President on a campaign of press freedom in 1953, finishing a close second.

The Ubyssey reported that while Schlesinger lost by 147 votes, over 200 votes were suspected of being tampered with, calling into question the validity of the results.

He would never quite get over his scepticism of our student union.

“The AMS is so bloody self-righteous,” said Schlesinger in a Ubyssey interview at the paper’s 75th anniversary celebration.

The shenanigans didn’t stop there. Schlesinger is rumoured to have stuffed the ballot box to ensure Allan Fotheringham was elected as editor-in-chief following his own term in 1953.

“There were rumours that Joe had stuffed the ballot box, he being a Czech from afar who knew how to do such things,” wrote Fotheringham in his own memoirs.

“In our meetings in our foreign correspondent days in Paris or London or wherever, when the wine started to flow I would tell that story. Joe would neither confirm nor deny.”

Alleged democratic tampering aside, Schlesinger was also at this paper during its lengthy war with the engineers. Fotheringham describes numerous times when the “Gears” literally kidnapped him after negative coverage. Schlesinger participated in the taunting. In one 1952 column, he jokingly offered to give an engineer a job at the paper to see if they could handle it. It’s unclear if that ever came to pass.

Schlesinger’s ties to UBC didn’t end when he graduated. For decades, he was a source of inspiration and guidance for Ubyssey editors. And even now, he keeps on giving.

A few weeks prior to his death, Schlesinger’s daughter contacted the Global Reporting Centre (GRC) at the UBC School of Journalism on her father’s behalf to donate many of his papers, scripts, disks and photos from his decades in the field.

GRC Director Peter Klein said the GRC is planning an event to honour Schlesinger’s life and donation later this year, as it continues to work out the details of how to keep and make the archives accessible to students and faculty alike.

“Seeing the raw material of his reporting could be invaluable to researchers, as well as those studying journalism,” wrote Klein in a statement to The Ubyssey.

The UBC and Ubyssey Schlesinger knew are very different from the ones we know today. But some things never change, nor should they.

“At The Ubyssey I suddenly discovered there was more to news than just death, destruction and deprivation,” wrote Schlesinger. “That news didn’t have to hurt, that it could also be fun.”

— With files from Marina McDuff