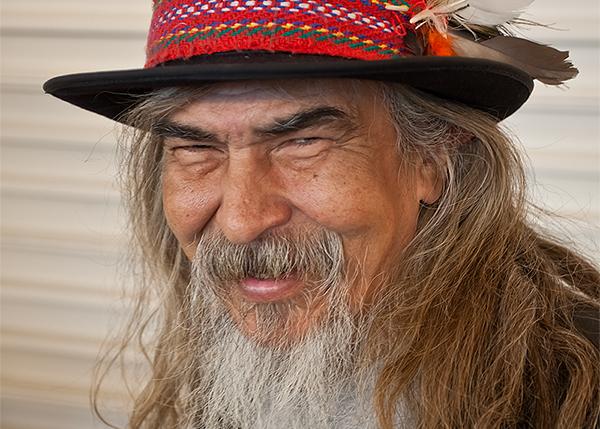 As a leader, an artist and a teacher, Kwakwaka’wakw Hereditary Chief Beau Dick has been an artist in residence at UBC since 2013. But he does not teach students the techniques of carving or painting. He teaches through storytelling, immersing students in the history and traditions of his culture.

Dick’s role on campus evolved into much more than what his job description required of him, which was simply to engage students with his culture through his art. He started meeting with members of various UBC departments — social workers, teachers, medical practitioners, law students and urban planners — and giving talks at high schools and elementary schools. His one-year term as artist in residence turned into three and Dick is still on campus. His art is showcased in the Morris and Helen Belkin Art Gallery’s current exhibition.

“It wasn't about art,” Dick reflected on his teaching. “It was more about history and the deeper meaning of my art form. That was more important to understand than to actually do it.”

Dick noted how when visiting the Museum of Anthropology on campus, we can appreciate the pieces we see for their aesthetic, mystique and the emotion they project. “But the deeper meaning of them is the story and the history of where they come from, which isn't revealed just by looking at them,” he said. Dick would open his seminars with stories reflecting the oral traditions of his culture and lead into discussions about potlatching — gift-giving rituals performed by First Nations cultures on important occasions such as births, deaths or weddings — and other ceremonies, the history of totem carving, shamanism and witchcraft.

Born into a family of carvers, Dick learned the art form first form his father, grandfather and uncle. He was then mentored by former UBC artists in residence Bill Reid and Doug Cranmer at Totem Park Residence. The latter had a strong influence on Dick’s style. Cranmar taught Dick that carvers and artists, once they develop a style — whether it’s how they carve eyes or the way they paint them, for example — for which their work becomes recognizable, they start to limit themselves to that style. He told Dick he could go beyond that and that if in the future one looked at Dick’s work and wondered who had made it, that would be the sign of mastery. Cranmar’s message stuck with Dick.

“I really tried over the years to grow into different styles and experiment, explore and do things different,” said Dick.

Beyond style, Dick was able to discover that “deeper meaning” of his art when he went to Alert Bay after several years of doing very poorly in school. “My education really began when I returned home and spent more time with my elders,” Dick explained. “I began to learn of my own true history about my culture, identity, bloodline, genealogy, ceremony and witchcraft.”

“Being gifted with some talent, I suppose, and a passion for art and for the understanding of it, the deeper meaning of the art form just led me down the path of discovery.”

Part of that discovery meant taking his hereditary position as a chieftain in his community. That role involves leading coming-of-age rites, weddings and other significant ceremonies such as the potlatch.

“In Western society, it appears that success is measured by how much one can acquire and attain in terms of wealth. In our society, that doesn't matter. Anybody can attain and acquire wealth. But can you give it all away? That is the measurement of accomplishment and achievement that we put on our coppers as a credit,” said Dick of the meaning of the potlatch. The copper shield is a symbol of wealth.

In 2014, Dick and other members of the First Nations community performed a shaming ceremony on Parliament Hill in Ottawa, which consisted of breaking a copper shield in a sign of protest and condemnation of the government’s relationship with First Nations.

“I don't consider myself a Canadian citizen,” said Dick. “I can be a little bit patriotic in the sense that I'm proud of Canada, what it may represent and what it stands for. But at the same time, the reality of the injustice that has been served to our people — and I'm talking about the First Nations — has to be recognized and their responsibility firstly should be to us.”

“I hear it all the time that this is ‘unceded territory.’ I kind of wonder if that's lip service.” said Dick, ambivalent towards UBC’s engagement with First Nations. “It's a polite and courteous thing to do, but do they really mean it? I'm not so sure. Although, I’ve met so many wonderful people here at UBC who are on paths of discovery and they want get it right. They're looking for the truth and they'll find it.”

Beau Dick and other activists from the First Nations community will be holding the final “Tea with Beau” session of the year at the Belkin on March 31 at 1 p.m., where they will talk about the exhibition, First Nations art and their experiences.