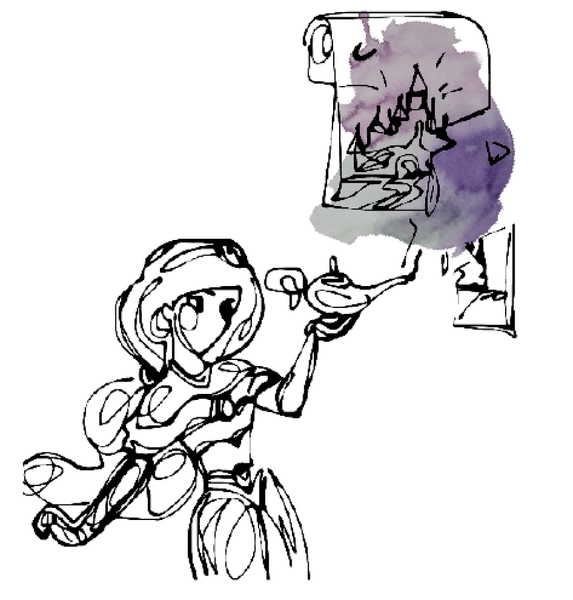 WHEN I WAS A KID, I used to get frightened watching Disney movies with my mom.

For some reason, in all my favourite movies, all the moms are dead. It seemed as if the main character’s mother needed to die for them to become the hero they need to be to save themselves or their family or the world — to stand at the sunset of their Happily Ever After. So I would watch Snow White and Beauty and the Beast and Bambi with my mother. During the movie I would grab her hand and see it felt like nothing couldn’t fit into her long fingers. It felt like we were shaking hands as if we were making a deal, a promise, that we would never be apart.

I can still feel her palm against mine.

“CAMMY,” MY MOTHER COOED, over 10 years later. “Cammy, I am so proud of the person you’ve become.”

My cheeks felt hot. I was 17 and awkward and my long-distance mother was validating me over the phone. I mumbled, “Thanks, Mom.”

I had stopped living with my mother before I turned 10, instead moving in with my father and my stepmother (something that all my fairy-tale favourites would have feared). Together, we moved to Virginia, just outside of Washington, D.C. And then to Calgary. And then to Seattle. And my mother, who held my hand as if she could anchor me to this world, became a voice in a little silver box I talked to once a week.

Here I was on the phone with the woman who had birthed me. We discussed the college acceptances I had heard about over a month ago and hadn’t told her about.

I told her about each of the schools and where they were. I did not tell her that one of them was my ‘Dream School’ — a fantasyland fine-arts school in Boston. I did not tell her about the financial worries, about being scared to move away from Dad and my stepmom and about my fear of doing long-distance with my partner.

“Cammy, you are a dreamer whose dreams are coming true,” my mother gushed after I gave her a list of universities that she knew nothing about. “My princess, I want to give you something.”

My mom then explained to me that she had secretly been saving money up for me to go to university. Tens of thousands of dollars to give me the future she had always wanted.

And suddenly I was a kid again, curled up on the couch next to my mother. Her palm in my hand was warm and firm and alive. I gripped the phone tighter as she spoke, as if it was her long fingers reaching out to comb my hair.

Her smile seemed to coat her words. “I have devoted my life to you, my princess. This is the least I can do to make your dreams come true.”

IN DISNEY MOVIES, YOU DON’T actually see the protagonist’s mother die — you are just given context that she’s gone, like a breath in the wind.

My dad called me while I was at home, a week before I had to declare which university I’d attend. Calls in the middle of the day were not out of the blue; we had been talking about money a lot lately.

“With the money Mom has been saving for me,” I would say. “I can afford to go to my Dream School.”

“Honey, we need to talk about Mom.”

My gospel paused on my tongue. “What about Mom?”

“Well, I really took to heart the conversations we have been having about your university opportunities,” Dad told me. “So I called your mother to discuss the details further and… I’m sorry, Cam.”

“Your mother … wasn’t exactly truthful with you,” my dad explained, gently. “There was never any money to begin with.”

In Disney movies, you are just given context that the protagonist’s mother is gone — like a breath in the wind. Like money from a vault. Like a mother’s hand in yours.

I MOVED TO UBC a few months after that. I do not remember much of the moving process except that my dad drove and my stepmom kept smiling at me in the rear-view mirror. I thought about how, as a child, my mom used to hold my hand to let me know she wasn’t going anywhere. My stepmom was smiling now to let me know it was okay to move on.

After my parents left, I sat in my dorm, listening to students in the hallway, moving their things in, awkwardly introducing each other and trying to figure out where the hell they were supposed to eat dinner.

That’s when I get a call from Leila.

Leila and I went to high school together and both found ourselves starting at UBC that year. We spent some time with each other the summer after graduating to get to know each other. Looking back, those short encounters were like an awkward blind date with the love of your life. That first day at UBC was the beginning of our love story.

When Leila tells this story, she always says she texted me. She probably did — Leila has a better memory. But when I think back to that day, to my stepmom’s rear-view mirror smile, to sitting on my stiff dorm bed in the swirling sunshine, to my things populating this Martian landscape, I hear Leila’s voice clear in my head. My parents are gone, and I have nothing to do. Want to hang out?

I HAVE A PHOTO OF LEILA from that day. She sits on a log at Wreck Beach, facing me while the sun washes over her skin, like honey over wood. She smiles at me, her eyes bright in a way that eyes are bright when you are 18 because nothing scares you.

We stumbled down the hundreds of steps to the infamous nudist beach on campus. We talked about the people we have been our whole lives, the people we want to become and the things we want to do. We joked about frats and how we would never enter one (a promise we broke the very next night).

As we chatted, orange and pink swirl through the periwinkle sky, bleeding this colourful cacophony into the fluffy clouds that dot the sky. The sun faded along the horizon, the ocean whispering harmonies along to the nudists howling at the sun as it sets. It is the sort of sunset that would infiltrate your Instagram feed, yet felt like the apocalypse. Like being reborn.

My phone buzzed in my pocket.

For a long time, family meant phone calls. It meant trusting that someone was holding the phone like it was your hand, like it could anchor your relationship together no matter the adversity you faced. It meant believing their sunshine through the dial tone, that each mile of distance was just another bump in the road before your fiery sunset Happily Ever After together.

I looked at Leila, at her flurry of brown hair dancing in the wind and her smile as warm as the apple crisp she expertly will cook in our second year.

I put my phone in my pocket. I’d already got a call from family that day.