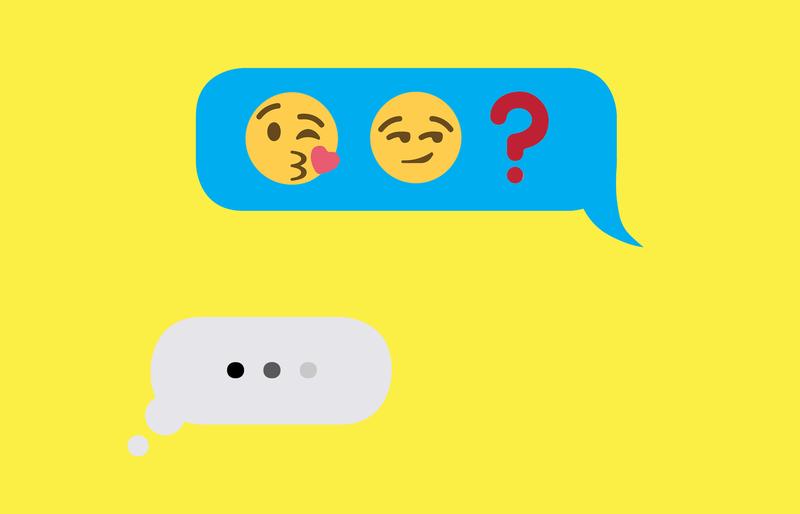 The campaign features the cute smartphone emoticons we all know so well.

Walking around campus, it is impossible to avoid the giant emojis plastered to the ground and walls of bathrooms.

It seems simple, doesn’t it?

The new consent awareness campaign is goofy, oddly lighthearted and perhaps even innovative in it is latest effort to raise campus awareness for the elimination of sexual assaults on campus.

“No Means No,” now worked into the English vernacular on issues of consent, was the first of these efforts pioneered by the Canadian Federation of Students almost 20 years ago.

Of course it is unavoidable that dealing with such a serious issue would lead to mixed reviews for such campaigns as people pick apart how they portray consent.

“No Means No,” for example, has since transformed into “Yes Means Yes.” This emphasizes the need for an unambiguous, affirmative consent to engage in any sexual activity as opposed to putting the onus on one party to say “no.”

In the years since "No Means No" hit campuses, many universities have focused on getting a similar message out in creative ways. The #GetConsent campaign, launched at Dalhousie University in 2014, seeks to open a conversation about the dialogue going on around consent online and in person. Using videos and a social media blitz, #GetConsent inspired other organizations around Canada to use aggressive and innovative method tactics to reach students.

Another recent effort, “Consent is Sexy,” sought to portray sexual assault prevention in a more playful manner and received its own backlash. While the campaign was praised for making consent appealing to young people, it was criticized for not emphasizing that it’s also mandatory. Finding harmony in balancing the positive and the negative aspects of the consent and sexual assault issue is is one that most campaigns have struggled to achieve.

With the emoji campaign, UBC is positioning itself clearly on the positive end of the spectrum by portraying consent in a playful and lighthearted manner. However, they are doing so while watching out for potential pitfalls.

Communications Coordinator Chris Sulymka was one of the instrumental voices in the design of the emoji campaign. He suggests more thought went into the campaign than meets the eye.

While most awareness-raising campaigns surrounding sexual violence, assault and consent are targeted toward heteronormative couples, the emoji campaign is using the genderless, sexless figures in an attempt to represent everyone in the university community.

“We didn’t want to portray heteronormative imagery. We wanted to be sensitive to diversity, gender neutral and also approachable and clear,” Sulymka said.

The university’s Sexual Assault Prevention Team, the group behind the emoji campaign, said their message is that consent should be clear, obvious and it shouldn’t leave any questions to be answered. In short, an “enthusiastic yes” is essential for sex, making out, touching or a presumably sexual “whatever” as the posters put it.

“Our first goal is to make people stop and think – to notice it and to want to learn more,” said Janet Mee, director of Access and Diversity — one of the groups involved with SAPT. “It’s really a campaign about healthy relationships.”

While critics argue the campaign is too simplistic, Mee said the aim is not to convey the entire message through the passive campaign. Instead, it's to direct students through to the different resources the university offers. 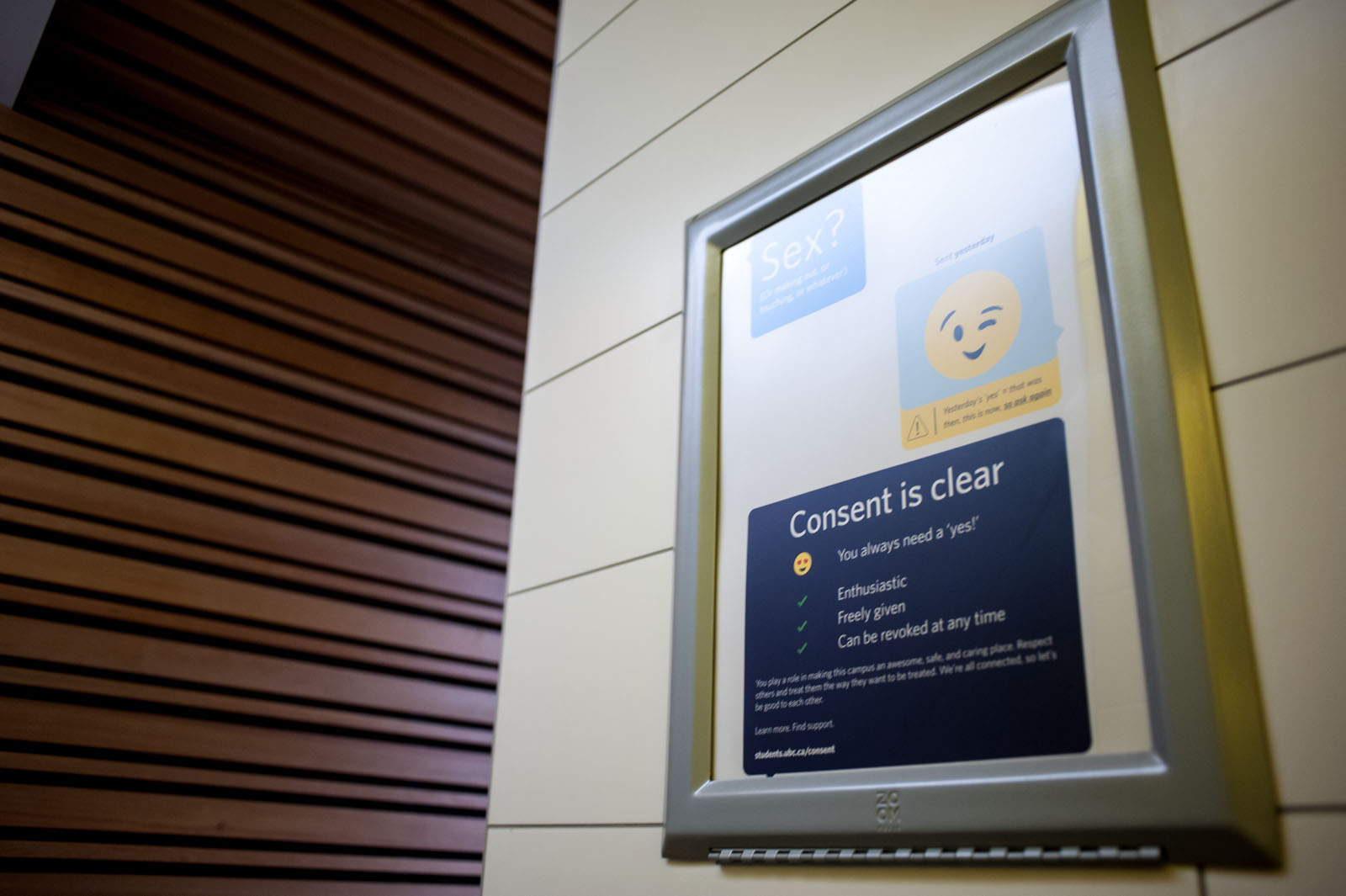 A poster from the campaign in a men's bathroom in the AMS Student Nest.

The floorgraphs and posters around campus stand out through the familiarity of the images and bright colours. The information provided is simple and directs viewers to Consent is Clear, a university website. Online, visitors are met with, “6 things to know about consent,” and links to other relationship resource websites from UBC.

“In addition to being a lot of fun, [it's] something that students would recognize [and] something that they use a lot of the time. There’s actually some science that supports using emojis as part of the campaign,” said Mee added, citing evidence that manipulations of facial figures have an influence on impression-formation and affect cognition in communication.

However, professor Leonora Angeles at UBC’s Institute for Gender, Race and Social Justice suggests the university is paying lip service to the need for a universal consent campaign when she says the most important goal is stopping men from assaulting women.

“We know who the target is and who is largely responsible for committing that form of violence in non-consensual intimate sexual relationships,” she said.

She added that the necessary messaging is made vague through the use of emojis and the simplicity of the posters limit the conversation about consent.

“How does that happy face play out when drugs and alcohol are involved?” she asked. “It doesn’t cover the range of possibilities where consent can be given to whom, to how many [and] under what conditions.”

Acknowledging that perhaps she’s asking too much from a single campaign, Angeles thinks that if SAPT is going to continue in this thread, there must be an iteration to account for a more nuanced take on the hard questions around consent and what it means under various conditions.

For example, while it's generally accepted among sexual assault prevention professionals that a sober and “enthusiastic yes” must be given prior to coitus at all times – observers like Angeles question how realistic this is.

“Happy and enthusiastic consent all the time? It’s difficult!” Angeles said. “The happy face, the banality of the happy face – enthusiastic ‘yes’ means you do not consider the nuances under which consent may be given.”

But Sulymka says that binary is exactly the point. “We wanted to get away from the idea that there’s a grey area,” he said. “If it’s not clear that you have consent, then you don’t.”

Carol Bilson, coordinator of the University of Victoria’s Anti Violence Project, agrees that while the emojis are an effective way of raising awareness, it is perhaps less effective than providing upfront information about consent.

“We’re of the mindset that we want to give as much information out front as possible,” she said of UVic’s approach. “At least it’s providing people an access point to seek out that information and I think it’s something to be commended – even if it’s an access point and not necessarily an overt instructional.”

Angeles believes however that, although the campaign is effective in attracting attention because of familiarity of the icons, the weaknesses in the campaign are largely due to its simplicity.

“It could have a weakness precisely because its use is very familiar icon,” she said. “The icon is so familiar that people might not associate it with a campaign that is really very serious.”

Associating a happy face with a campaign that addresses really serious issues has points that some might see as dangerous.

Ashley Bentley, manager of UBC’s Sexual Assault Support Centre (SASC), emphasized that the emoji campaign encourages students to engage in conversation, follow the strong visual impact of the floorgraphs and posters as well as find the resources available on campus for people affected or impacted by sexual assault.

“Because people don’t go through consent education in high school, it’s something that they might not be bringing with them in terms of their knowledge,” she said. “We need to teach [new students] what consent is and how they can use it within their relationships or hook ups.”

The consent campaign is one component of a multifaceted approach across the whole university in terms of talking about sexual assault and consent. The goal was to focus on consent itself while still also being sensitive and providing support resources.

Angeles argues that the campaign does not dig deep enough into the issues that are prevalent around campus.

“All I know is that effective campaigns should really take a more fresh, original thought provoking angle that could lead to more conversations ... For me, that campaign doesn’t give me that chance,” she said. “I hope this is just phase one of a broader campaign.”

It’s not that the campaign is childish, trivial or even too cute. Yes, it is simple and lighthearted. Yes, it grabs attention. But for those who the campaign is targeting, is the invitation to look more into the details online enough? Should the information be clear, unavoidable and at the forefront of every poster?

The emoji campaign is extremely serious in its intentions and students are noticing it. The campaign has been picked up by national news outlets and the “yes” faces are all around campus. The images are unavoidable, but is the message getting through?

“I continue encouraging UBC to really keep at it,” said Bilson. “Consent isn’t a monolith. It’ll take many attempts and I applaud their attempt.”