Summed up: The Ubyssey digs into language courses at UBC

Using data sourced from UBC Pair, The Ubyssey is launching "Summed up," a new series to answer some of the most frequent questions about all things grades and enrolment.

To avoid outlier results, the data used is from winter session grades between 2012 and 2017. Averages presented here are the mean of that class’s average grade across six years, though some courses may not be offered every single year.

Since there have been changes to some courses’ name or code over time, we have standardized all previous versions to the most current one. For example, First Nations Language courses were listed under FNLG until 2014, but data from 2012 to 2014 will be presented as First Nations and Endangered Language (FNEL) to match the most up-to-date name.

Due to UBC’s grading policy, students who don’t write the final exam or complete the course without withdrawing are still included in these averages.

So, based on statistics collected on courses from 21 languages, which of these classes is the easiest — and which could cause a hit to your GPA?

What makes a language class “easy”?

Your first thought might be a high class average. But if half the class gets 100 per cent and other gets 60 per cent, that class average of 80 per cent doesn’t tell the whole story.

On the other hand, we recognize that it is difficult for a large course that enrols students from diverse backgrounds and skill sets to maintain a small standard deviation.

An “easy pass” might also be a course that not many people failed or withdrew from, but that doesn’t guarantee a high average. Out of 1,701 students who took Japanese 101, only 4.7 per cent of them failed and 2.2 per cent withdrew — but at 71.8 per cent, its class average is on the lower end of introductory-level language courses.

We concluded that an “easy” language class has to have a high average, a moderate standard deviation, a low failure rate and a low withdrawal rate.

Using this criteria, the title for the easiest popular introductory language courses — courses that have enrolled more than 500 students in the past six years — is a close contest between Russian 101 and German 100.

Professor Geoffrey Winthrop-Young heads the department of Central, Eastern and Northern European Studies, which covers German, Russian, Polish, Danish and Swedish. He was “not surprised” by the findings, attributing them to “rigorous training of instructors” and smaller class sizes. He also pointed out the similarity between German and English.

“Anybody who is fluent in English, let alone whose mother language is English, has a head up for German because it’s the only other West Germanic language taught on campus,” Winthrop-Young said.

“It’s a bit like learning tennis when you already know how to play squash.”

What makes a language class “hard”?

Based on the 244 students who took it, Japanese 160 has a 70.4 per cent average and 17.7 per cent standard deviation. It also has a 9.6 per cent failure rate and a 2.9 per cent withdrawal rate. This difficulty could partly be explained by the fact that it is an intensive introductory class, which demands double the time commitment per week.

But the second hardest course is also from the Japanese department, Japanese 100. Out of 2,852 enrolled students, 7.8 per cent failed and 4.1 per cent withdrew — and like Japanese 160, its average is on the lower end of the introductory courses and it has a high standard deviation, at 70.7 and 16.9 per cent respectively.

In fact, five out of the the ten language courses with the lowest averages are all in the Japanese department. 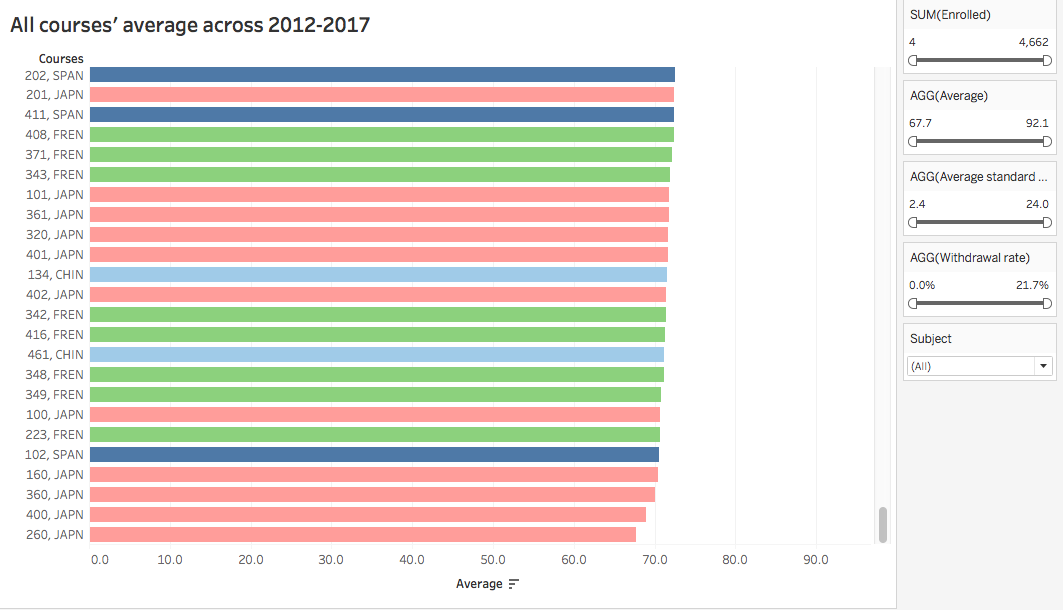 Five out of the the ten language courses with the lowest averages are all in the Japanese department. Screenshot from the data analysis

Dr. Rebecca Chau, the Japanese language program coordinator, said the department does not have a mandated average, but would ask questions if a class has extremely high or low grades and would consider scaling if necessary.

Instead, she attributed the apparent difficulty to a number of factors, with the most visible one being the significant difference between English and Japanese. Dr. Qian Wang, the Chinese language program director, also pointed out that for many students, it is not just about learning Japanese, but also English and how a Western university works.

They then stressed that it is less about grades and more about how effectively can students apply their language skills to real life situations. Accordingly, both departments are trying to move away from major written exams and toward formative assessments.

“Assessment is not just about the grammar but also their active use of the language,” Chau said. “Can you give a presentation about your hometown or order food at a restaurant?”

Off the beaten path

Beside popular languages like German, Chinese and Japanese, there are also smaller languages that offer a favourable grade distribution.

For example, of the 105 students who took Danish 100, none failed out. The course also has a 85.9 per cent average, along with a low standard deviation of 9.1 per cent and withdrawal rate of 2.9 per cent.

Does this mean that smaller language classes guarantee a high average? Not necessarily. The 176 students who took Latin 102 yielded a 74.3 per cent average and a 7.4 per cent fail rate. The course also sees a high standard deviation of 18.1 per cent.

What makes a small language easy to learn, ultimately, has a lot to do with the student’s personal motivation and how the instructor facilitates that. Take Portuguese, for example — only a maximum of 35 students take introductory Portuguese each year, and they have an average grade of close to 90 per cent with no fails or withdrawals.

That’s because the decision to take Portuguese, considered a minor language in Canada, is often a personal one.

Undergraduate Advisor Alessandra Santos noted that students who take Portuguese almost alway have a personal interest in Portuguese or Brazilian culture — whether it's because they’ve travelled there, are studying these regions in other courses, or have a romantic partner who speaks the language.

“So motivation comes from a personal reason that is not necessarily related to heritage.”

These trends might not hold for upper-year language courses, however.

“When you go higher, it does not necessarily become easier — it becomes more difficult like the more you learn squash, the more you realize it’s not tennis,” said Winthrop-Young of the difference between introductory and upper-year German courses.

At the same time, he also discussed factors that could contribute to a high average in upper-year courses, such as the frequency of the course offering, the course sequence, the course’s target for enrolment and whether it’s taught in German or English.

“If I see a larger content course class which has an average that goes over 80 per cent, I start asking questions,” Winthrop-Young said.

“But before asking questions, I look at all these things like what’s the enrolment date, what’s the background of the students. If you have a fourth-year major course, you’re self-selecting for people who are actually interested.”

The Japanese department sees an inverse trend. While its introductory courses had both high fail rates and low averages, upper-year courses’ fail rates dropped by half with most ranging from 0 to 4.2 per cent. Their averages also broke into the 72 to 81.1 per cent range, a pattern Chau acknowledged.

“It’s challenging to learn a new language,” she said. “Once they settle into it, they do much better. We’re happy to see that students can grow over time.”

This article has been updated to clarify what the measure of standard deviation means in terms of grades for each course.