Our Campus: Anna Tornros is fighting for change at the intersection of transit and disability 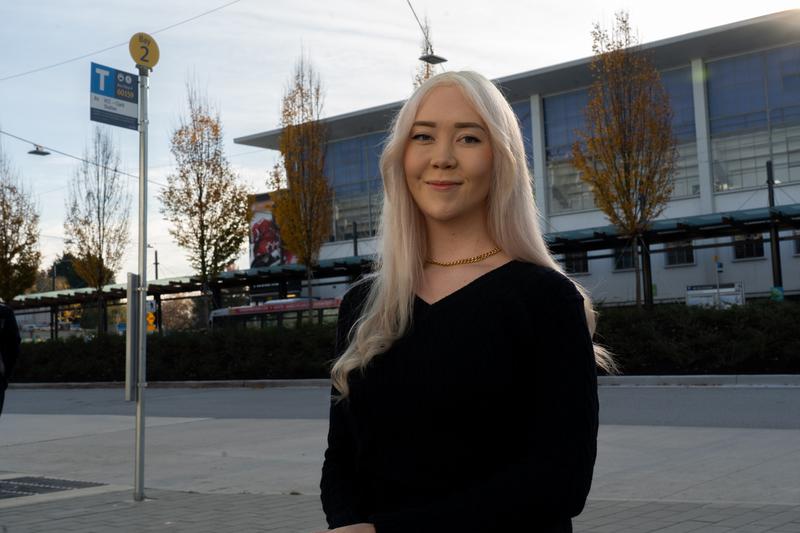 Whenever she boards a bus, Tornros beelines for the priority seats. Tornros has Postural Orthostatic Tachycardia Syndrome (POTS) and Chronic Fatigue Syndrome, both of which make transit difficult for her.

POTS is a condition that affects blood flow, with symptoms that come on when changing posture, according to the Cleveland Clinic. Those symptoms include lightheadedness, fainting and a rapid increase in heartbeat.

“I can faint [if I stand up too long]. I usually feel really sick and dizzy, and it’s not something you can see,” Tornros said.

When she sits, she hears whispers, gets dirty looks and even hears people cursing at her under their breath, especially when someone elderly, pregnant or with a visible disability boards the bus.

“Sometimes, even though I know I’ll faint if I stand, I don’t dare to sit in the priority seats because I know that if an old person gets on everyone’s going to glare at me and expect me to get up for this person when I would probably have been more in danger of standing than they would,” she said.

“It’s just such an emotional burden that it’s placed on you as someone with an invisible disability because you can’t outwardly show how you’re suffering.”

Finally, Tornros had had enough.

“After one big incident where I had tears streaming down my face as I ran off the bus, I was like, ‘I can’t believe nobody’s talking about this or doing anything about this,’” Tornros said. “I don’t want this burden every day. It’s already enough to be disabled.”

She sent off an email to the City of Vancouver, detailing her situation, her complaints and her demands for long-needed change.

According to Tornros, her proposed changes are fairly small, but could have a large impact on people living with invisible disabilities.

Her first proposal was to update the decals adorning a bus’s priority seating area.

“I feel like [the decals] just systematically incorporate the continued exclusion of the invisibly disabled,” Tornros said. She also requested a change to the decals to include references to people with invisible disabilities, sending them examples from transit systems in Europe.

She cited the London Underground as a good example. According to her, there are decals on the trains that say, ‘You may be asked to stand by someone with an invisible illness. Please make sure to know that disability may not be apparent immediately.’

In response to her concerns, TransLink proposed an action plan.

“At this point [we had] been talking for over a year and the action plan that they sent me in the end [...] is a comprehensive, ‘we’re going to actually do this’ thing,” Tornros said.

In the action plan, TransLink outlined their goals based on Tornros’s proposal, including updating the decals and putting together a promotional campaign on awareness of people with invisible disabilities on transit.

“[They said they were] committed to making these changes,” Tornros said. “So I’m very happy about that.”

On transit, Tornros has had some bad days.

“I’ve had some [...] incidents where I’ve been cursed at to my face, and then I’ve left the bus crying,” Tornros said.

While she hasn’t had incidents like that on campus, Tornros did say there is work to be done in order to make UBC more accessible for people with both visible and invisible disabilities.

“UBC is doing okay. I mean, they’re leagues ahead of a lot of other places when it comes to accessibility, and they’re working on it,” Tornros said. “I know they’re working very hard on it.”

“In the disabled community, it’s very controversial. I was surprised that a university as forward thinking as UBC would kind of buy into that,” she said.

When UBC Food Services enacted the plastic straw ban in August 2018, it was criticized for disregarding the needs of those with mobility issues, as plastic straws prove more accessible to those with conditions such as Parkinson’s. In response, Victoria Wakefield, purchasing manager for Student Housing and Hospitality Services (SHHS), said in an interview in August 2018 that SHHS believed people with disabilities often come prepared.

“We were also told that people with severe mobility issues come prepared and have their own hardware,” Wakefield said in an interview with The Ubyssey.

“It is something that places the burden on disabled people,” Tornros said.

As for invisible disabilities, Tornros noted the lack of conversation.

“It’s very much something that I haven’t heard talked about [on campus]. I don’t see it mentioned a lot,” she said.

What else can be done?

As of now, no physical changes have been made to the priority seating areas.

But Tornros is determined to make TransLink follow through with what they proposed.

“Unfortunately, we’re dealing with bureaucracy here and it is a bit slow,” Tornros said. “But this is something I really care about, and I don’t want them to just have sent me an action plan without showing how they’re following up with it. So I’m gonna keep following up until until I see results.”

Tornros also wants to get the word out about invisible disabilities in general.

“A lot of my friends have told me that before I spoke about this, nobody even knew that that was a thing,” Tornros said. “I just want people to know that it’s a thing.

“If you’re suffering in some way, I really encourage you to take action into your own hands because nobody else is going to fight in your corner necessarily, especially if it’s a problem that’s not very visibly talked about.”