Our Campus: The Beaty Biodiversity Museum is more than an archive for dead specimens 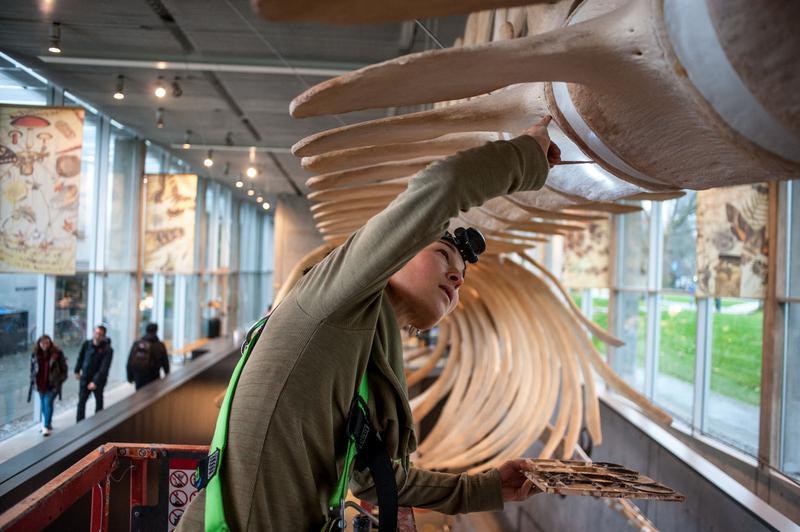 The Beaty Biodiversity Museum is known for its extensive exhibits on natural history and its most striking exhibit — an 82-foot skeleton of a blue whale, hanging from the roof, right in the centre of the building atrium. However, you can't find its own history, arguably the museum's most interesting exhibit, by visiting in person.

UBC zoology professor and acting director of the museum Dr. Eric Taylor knows a great deal about the museum’s past, its exhibits and how students can get involved with the facilities it has to offer. He discussed its founding in 1999 and the circumstances surrounding it.

“The first thing that we needed to open the museum was the finance,” he said. “We received a federal grant — about 80 per cent of the total initial budget — from the Canadian Foundation for Innovation.”

The Canadian Foundation for Innovation (CFI) is an independent funding body that was initially created by the Government of Canada, which has since terminated its sponsorship. Since its founding in 1997, the CFI's principal focus has been to “ensure that Canadian researchers have the tools — cutting-edge labs, facilities and equipment — they need to push the frontiers of knowledge in all directions.”

Beaty’s creation fell under what the CFI’s website describes as “discovery and technology development.”

According to Taylor, the museum is named after two alumni benefactors Ross and Trish Beaty. A mining legend, Ross Beaty is now chairman of Pan American Silver and Alterra Power, and in 1999, donated the remaining 20 per cent of the budget not covered by the CFI grant.

Beaty is home to a vast array of natural history exhibits, and has been architecturally designed to cater to and house different types of exhibits. However, Taylor explained that the intricate architecture is not the defining feature of the museum, but rather facilitates access to the world-class collections.

“It’s more the — I would say around 2.1 million — specimens in all of the collections that we have. All the exhibits are in this public space where people can wander. The vast majority of museums have a minority of their exhibits on public display, whereas virtually all of our exhibits are on public display for all to see,” he said.

Given the vast collection of exhibits and Beaty’s annual contributions to biological research, Taylor believes students should get involved in the museum's day-to-day operations. He specified that the museum offers both professional and academic opportunities. But simply applying does not guarantee that a student is hired.

“We — for a relatively small number of students — do hire every term [through the Work Learn Program]. This happens usually at the end of the summer. We always get money from the Canada Student Works Program, which is important because it ensures that students work for pay, obviously,” he said.

Beaty has a number of student jobs during the summertime or even during academic sessions, from curatorial roles to marketing and public outreach.

“Students can work either in the collections department, where they’re helping curators organize and work on specimens and research and so on, or the public outreach part where they help to design programs and other things [related to museum functionality]. You can also be a guide. We have a 130 volunteers who do that too and I’m pretty sure the majority of those are students,” he said.

The museum is also equipped to host a variety of academic endeavours. Taylor spoke of the many opportunities that university classes can take advantage of to enrich knowledge about biodiversity and the environment.

“Student classes use the museum for various classroom exercises and they’re certainly involved academically as well,” he said. “That’s important for us — to integrate ourselves into the undergraduate teaching program and many undergraduates have done that.”

The Beaty Biodiversity Museum is open from Tuesday to Sunday between 10 a.m. and 5 p.m.