Our Campus: Blessing Olukemi Falayi is making the Women's Centre the most accessible it has ever been 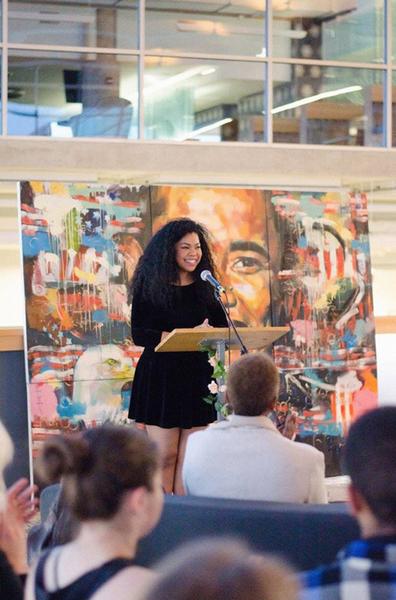 Blessing is hoping to make the Women's Centre the most open space for support. Photo Courtesy Swetha Prakash

Blessing Olukemi Falayi is the president of the Women's Centre, involved in UBC's chapter of Black Lives Matter (BLM) and a Pokemon Go aficionado.

Falayi, who is entering her fourth year at UBC with a double major in Political Science and Gender, Race, Sexuality and Social Justice, has been involved with the Women’s Centre since her second year. When she first began, she never saw herself as president. Since joining, however, the space has impacted her life deeply.

The UBC Women’s Centre is an AMS resource group that is run by students and has existed at the university for the last 40 years. It is a space open to all female identifying students, and provides programming such as free self-defence workshops, film screenings with panel discussions and peer support groups. The centre itself is located in the Nest and offers menstrual products, pregnancy tests and a library of feminist literature among other things.

“I want to make it the place women want to be when they are looking for support and community,” she said. “Looking back, I never thought the centre would turn into such a meaningful space for me. I want everyone to know about it.”

For the upcoming school year, she hopes that the centre will have a bigger presence on-campus. She plans to make it the most inclusive and accessible space it ever has been, so that as many women as possible are aware of it and are able to use the resources it provides.

There are distinct moments that stick out to her when looking back on her involvement.

“After the Michael Brown grand jury verdict, a few of us were in the Women’s Centre waiting for the decision. It was so heartbreaking that a few of us decided to put on a vigil for Mike Brown and fostering a place of healing,” she said. “I know it may not seem related, but any issue pertaining to black lives cannot be divorced from my understandings of feminism. The women at the centre were so supportive of it and we just threw a really kind of last minute event together.”

“It was such a beautiful and memorable event, I think it will stay with me forever.”

Falayi's most cherished memory from the centre was an open house art day.

"So many women came out," she said. "It was way more than I had even hoped. They all made awesome radical art, we played Drake and had good times."

"I got to know a lot of the girls on a much more personal and intimate basis. Now the centre is decorated with amazing art by all these wonderful women who came out."

Her involvement on campus didn’t end there. She also took on a coordinator position with Colour Connected Against Racism and has an ongoing involvement with the Vancouver chapter of Black Lives Matter — something she balances with academics and work.

“When Mike Brown’s murder happened in August 2014, I got swept up in the immense political influence that BLM activists in the United States had made and it honestly brought out a bunch of mixed emotions in me,” Falayi said. “It was both gruelling and exhausting to hear about these murders and the injustice that continued to persist following each one, but it was also immensely healing to be connected to all these other people who felt the same way. It made me hopeful — it was and is so radical.”