Our Campus: Chris Rambaran is building the "village” of support for former youth-in-care at UBC 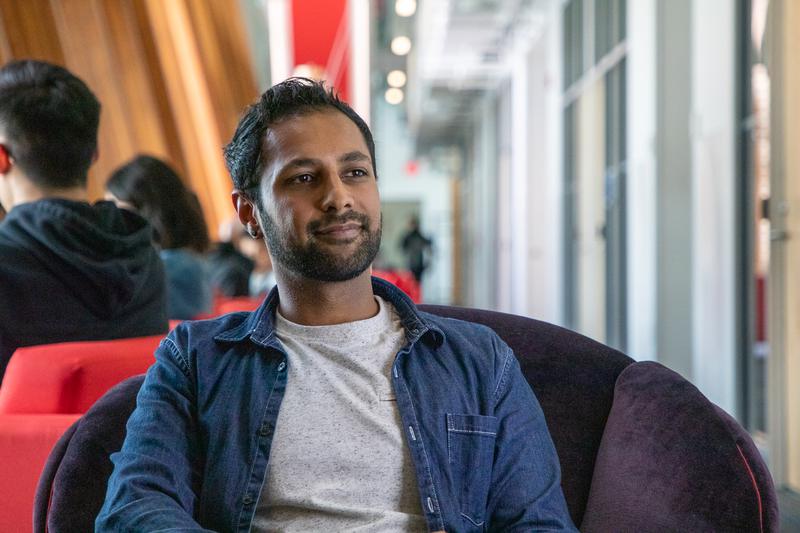 When Chris Rambaran was in foster care as a kid, his social worker used to take him out for ice cream.

“He was so involved,” Rambaran said. “He would meet with me, he would take me out, he would drop me off for volunteer opportunities … things like that.”

Rambaran was in and out of care until he was 12. He’d had some good social workers and some bad, but this particular one stands out in his mind.

“To me, that made all the difference, because it showed me that he really cared about me. He believed in me. He saw something in me. That’s how I thought all social workers should practice; that there should be a relational component to it,” Rambaran said.

In his adult life, Rambaran went on to become a social worker himself, intent on changing the system to make more social workers as involved as his was.

“But what I saw in that system was a high amount of volume and a lack of resources, especially in regards to staff turnover,” Rambaran said. “I started feeling … the restrictions and the limitations of the system I was working within.”

While he felt he was making small-scale change, he wasn’t making the meaningful change he wanted to because of some limiting policies.

“The very things that I wanted to change were restricting me from being able to do that in the first place,” Rambaran said.

“Working within the system, it can be really hard to actually engage on that level of systemic change. It seems a little bit more feasible to do it from the outside, and more effective,” he said.

From social services to enrolment services

In November 2018, Rambaran began at UBC as an enrolment services advisor specializing in supporting former youth in care.

UBC’s tuition waiver for former youth in care, followed by the provincial waiver led to a “huge spike” in the number of former youth in care at the university. Initially, there was just a select number of enrolment service advisors that supported the students receiving funding through the waiver.

“As the numbers grew, there was more recognition of the unique needs around the experiences of students from care, including direct support and wraparound support,” Rambaran said.

Providing that support is now his job at UBC.

Rambaran helps former youth in care navigate the services and resources available to them, figures out their registration and connects them with each other to build a community of people with the shared experience of being in the foster care system.

“[In social work] I was seeing youth age out at 19, when they weren’t ready, and there was nothing I could do about it,” Rambaran remembered. “19 years old was the cutoff no matter what and that’s when the ministry is no longer legally responsible for youth aging out of care.”

Rambaran said that current and former youth in care are disproportionately represented in criminal justice and the mental healthcare systems. According to a 2016 CBC article, youth in care have a high school graduation rate of only 47 per cent in BC, compared to 84 per cent of the general population.

“There’s all of these statistics that paint a very, I would say, grim picture for youth transitioning out of care. And education is one of the greatest protective factors,” he said. “By being here, and by providing those opportunities for them to come here, it’s giving them that chance to have control over their own narrative, and also to change that status quo, and break those cycles of poverty and intergenerational trauma.

“To me, that’s what this work is all about, and why I’m really excited to be here.”

At UBC, Rambaran works with former youth in care, many of whom have a diverse set of experiences from being in care.

“It’s just a huge spectrum. You could be in care and have a variety of experiences from all walks of life. That’s why it’s really important to know that no one experiences [the in-care system] the same as another,” Rambaran said.

He also spoke about how he often has to work to not impose his own experience on others.

“I didn’t age out of care. That, I think, is a key factor and how I’m able to be in the privileged position I am today … I realized that’s not the case for a lot of youth, especially those that are aging out of foster care,” he said.

Much of Rambaran’s work focuses on creating a community for former youth in care to connect with each other and share their diverse experiences with each other, something that Rambaran didn’t have when he attended UBC.

Rambaran said that he didn’t necessarily see his status as a former youth in care as a “political identity” in the way he does now, so he didn’t seek out that community.

“I remember thinking that I was the only one,” he said.

Nearing a full year of employment at UBC, Rambaran hopes to build the university-based community up and have more collaborative opportunities with the outside community in the future.

“The Ministry of Children and Families, if they’re the parents of youth in care, then post-secondary institutions are like the extended relatives … and then we all make up the community to support the students,” Rambaran said, emphasizing the need to work together to make the lives of current and former youth in care easier.

“We’re not effective in silos,” Rambaran said. “It really does take a collaborative approach and community approach to address any one of the systemic needs of the students."