Our Campus: David Speight decides what you eat 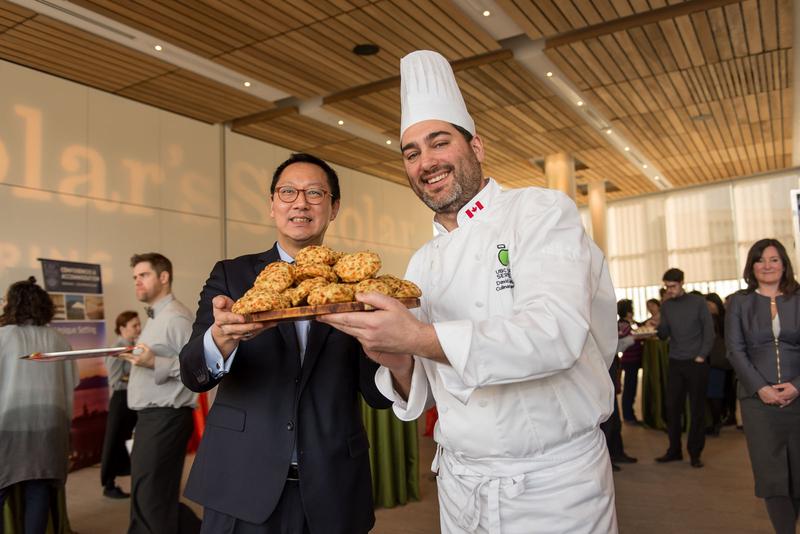 David Speight's job is to decide what you eat on a day-to-day basis. As the executive chef and culinary director for all of UBC Food Services, he oversees catering, food trucks, residence dining and retail outlets on campus.

Speight began his culinary career as a dishwasher, but quickly fell in love with the industry. He eventually worked his way up the ladder to become executive chef at Vancouver seafood restaurant Monk McQueens.

To better prepare for executive roles, Speight earned his red seal at Vancouver Community College, and studied at the Culinary Institute of America, where he acquired his culinary degree.

In 2008, Speight took on the role of executive chef at Rogers Arena. It was a departure from his comfort zone on the line, and his first foray into multi-unit management.

“When I heard about that job, I wasn’t interested. Hot dogs, hamburgers — I thought that was what it was. I went for the interview anyways because I’m a big Canucks fan ... I learned that they had full-service restaurants and did food for the suites and players,” he said.

At Rogers, Speight oversaw over a hundred employees and revenues in excess of $26 million per year. He also managed food for the Juno Awards, the 2010 Winter Olympics and the 2011 Stanley Cup Final.

In 2014, he left the position and came to UBC. Since being promoted to his current role in 2015, Speight has strived to improve every facet of Food Services.

“The challenges are many because the business is so big and diverse. There’s been a great change over the last three years at UBC Food Services to improve our services and improve how we’re doing business here on campus. I’d like to say that we’ve absolutely made some good headway on that,” he said.

Speight pointed to the re-branding of Westcadia Catering to Scholar’s Catering and the opening of Open Kitchen as his most notable accomplishments — and residence dining halls as his biggest challenge.

“We know we have a long way to go to improve residence dining. Open Kitchen is an example of where we’re going. We’re going to take things that we learned that were successful at Open Kitchen, and translate those into Totem and Vanier,” he said.

Speight also said that the residence meal plan is undergoing significant changes, which are expected to take effect in September 2017.

“We understand that students are, well, students and that they don’t have a lot of money at this point in their life. It’s going to be an ongoing give-and-take relationship where we try to give them everything they’re looking for in a model that is financially sustainable for us as an organization,” he said.

To clarify their organizational philosophy, Food Services recently published an updated Vision & Values document to inform the public about their vision for the future. Developed as a response to lackluster reviews of residence food and catering, the document has goals of “high-quality, nutritious, sustainable foods” and a “commitment to transparency.”

Speight explained that the business currently fails to meet many of these values and goals, but significant changes are in the works.

“Are we at 100 per cent? Absolutely not. But we want to be challenged by it and by ourselves, staff, students [so that] we can become better. We hear [UBC students and staff] loud and clear — they want fresh, healthy ingredients and we’re transitioning to that,” he said.

The desired end goal is to offer sustainable and local food palatable to all.  There is one drawback — Speight was not shy about the possibility of these changes driving up prices on his end.

“At the end of the day, real food costs real money. We also pay our workers a living wage with excellent benefits and we’re proud of that. Extra training is not going to increase wages, [but] the price of the food absolutely will [go up]. It’s up to us to better manage that so that we don’t pass that on to the end user, the customer,” he said.

To this end, Speight believes leveraging UBC’s massive purchasing power and increasing waste efficiency will balance the budget. In other words, Food Services is going to pay more for food, but find better value and throw less away.