Our Campus: Erin Fields is breaking down barriers and empowering students at the UBC Library 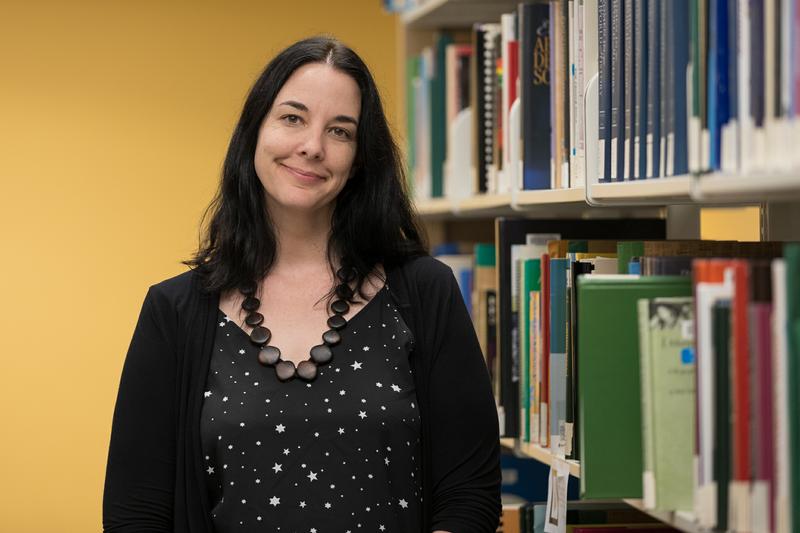 When Erin Fields read the Wikipedia page, she did a double take.

It wasn’t that the page on Vera Weatherbie was wrong. It just didn’t exist at all.

“The only mention of her in Wikipedia was as being a muse of her husband,” said Fields, “which was deeply offensive to me.” Weatherbie, a founder of Emily Carr University, had won multiple awards for her paintings and been featured on a stamp by Canada Post.

“So I wrote an article on her and since then it has had multiple improvements by other people,” said Fields, noting that positive feedback encouraged her to keep going. “We’re elevating a silent voice that existed — that had value and that clearly had impact in the world — but that just did not exist because nobody was paying attention.

“That felt incredibly valuable to me because I felt also that it was raging against the patriarchy as well, which was deeply exciting,”

Elevating the voices and perspectives that knowledge structures have ignored and marginalized is central to Fields’s work as a liaison librarian for the humanities and social sciences at the UBC Library, where she focuses on gender, race, sexuality and social justice topics. And while the article she wrote on Weatherbie was an extracurricular project, stories like these define her mission to engage students and faculty in the “global dialogue” of open education and access to information at UBC.

“If you think about the kind of information that we ingest into the library, you want it to be representative of not just certain visions,” said Fields, who holds a master’s in library and archival studies in addition to degrees in communication and education.

Even if we are in the information age, Fields is wary that knowledge isn’t as open as many claim it is. For her, increasing access and democratizing knowledge creation is integral to ensuring the library reflects and uplifts traditionally marginalized communities.

“The entryway to traditional publishing processes and traditional knowledge sharing, there’s a barrier [there] unless you have the credentials, unless you are someone who is a researcher or a faculty member,” she said.

“So we’re limiting voices automatically, we’re saying that anybody who say might be from a community perspective, who might not have the credentials or who hasn’t published, they do not get entryway into this knowledge space.”

To change this barrier, she turns to the very place students have been warned about for years: Wikipedia.

“The fascinating thing about Wikipedia is that you have the ability to break-down a lot of barriers that in current information systems its harder to do. So with Wikipedia, we were talking about the ability to categorize information, to modify how it’s written, how it’s structured, to add content,” said Fields, noting that students shouldn’t be afraid to look for guidance on Wikipedia, but should remember to use it intelligently.

“And that is only going to be valuable to have again everybody adding knowledge [and] not just having it in the hands of experts.”

Fields works directly with students in classes across multiple disciplines to work on open pedagogy and Wikipedia-based projects that help them translate their knowledge from the classroom to real-world impact. This semester alone, she worked with dozens of classes to teach subject-specific information and crash courses on Wikipedia editing.

But even if it is innovative, Wikipedia and other community-developed knowledge sources aren’t perfect. The objectivity and notability requirements of Wikipedia articles — and the fact that Wikipedia editors and moderators are disproportionately white and male — can make it difficult to fill gaps in these resources.

That’s where Art+Feminism comes in. During this annual Wikipedia edit-a-thon that aims to increase the representation of female artists on the website, Fields works with the UBC Library to have librarians on call during the event every March to assist editors and writers in finding the information they need.

“You get to sit around a table with people who have the same kind of spirit about wanting to edit to improve the visibility of female artists and there’s an excitement about what they’re doing,” said Fields, who is working to get students and other librarians involved with the project.

Adding citations to pages on trans and non-binary artists is also a project of hers “to try to elevate again the breadth of knowledge about people again who are pretty invisible in that space.”

Changes in representation like these take time. Fields sees the UBC Library as being extremely proactive in its approach, but acknowledged that institutions can't just rely on policy to ensure they represent the community they serve.

“I think there’s a personal education that has to happen within people to understand,” said Fields. “Because sometimes I think it’s less a malicious act and more just something you don’t consider — because it’s not something that’s personal to you, you don’t see it as existing.”

Sometimes that means considering also why and for whom information should be openly accessible. In the case of Indigenous topics and resources housed by the library system, knowledge is made to be “community-facing” through projects like Indigitization, which provides funding and a toolkit for Indigenous communities to digitize their records and historical documents.

Ultimately, Fields wants to use the fact that libraries are powerful centres of knowledge to empower new voices through open pedagogy.

“That is why open is really exciting because it’s not just the expert who is writing, it’s everybody who is writing and who has a voice,” she said.

“If you’re willing to be a part of that global dialogue, I want to be somebody who helps that to happen because I see the work that’s being done and it deserves presence.”