Our Campus: News historian Dr. Heidi Tworek listens to the ‘silences of history’ 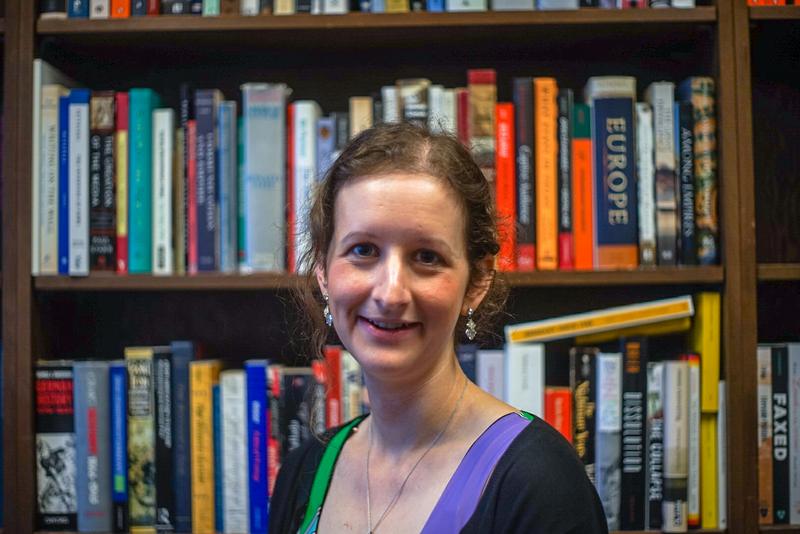 “People have long been concerned about these questions of what is true and what is false.” Salomon Micko Benrimoh

As chief sub-editor of a student paper at Cambridge during her undergraduate degree, Dr. Heidi Tworek was more concerned with catching mistakes and writing headlines than with studying news itself. After a changed graduate dissertation topic, however, Tworek finds herself investigating not only the history of news, “but how news is really created” in a time when the media is under increasing scrutiny.

“I’m trying to find many different ways to think through those really big questions about how news gets produced, who is controlling it, who’s trying to control it ... and how does or doesn’t it affect the course of history,” said Tworek, now an assistant professor of history at UBC.

She’s also fighting back against the notion that concerns about false information and “fake news” are new phenomena of the internet age.

“If we look at the 400-year history of news — so since newspapers were really invented — people have long been concerned about these questions of what is true and what is false,” said Tworek, noting that concerns about falsified moon landings didn’t just start when the space race took hold mid-way through the 20th century.

First, there was a satire of the printed news industry faking a moon landing by playwright Benjamin Jonson was performed in front of King James I in 1620. In 1835, the New York Herald published the “great moon hoax” to sell issues as the penny press began to take hold in the wake of urbanization and mass printing.

“And now of course, we have the conspiracy theories about whether there was a man on the moon in the first place,” she said. “So I guess the moon is a constant.”

But the internet has certainly changed the game. Tworek, whose book about how mass media was used by Germany in the early 20th century comes out this spring, notes that the invention of radio had huge impacts on the success of the German government’s media campaigns to “affect global geopolitics, economics and cultural attitudes towards Germans.”

“Now, theoretically, anybody with a computer can spread a falsified story exceedingly quickly,” said Tworek of the digital age. “So that presents a somewhat new challenge that we need to grapple with.”

Just as many might not think news itself has a history, international organizations are just now coming into the spotlight as subjects of historical enquiry — and Tworek is leading the way.

While teaching at Harvard — where she also earned her master’s and PhD — Tworek founded the United Nations (UN) History Project, a public resource centre for the study of international organizations within and beyond the scope of the UN.

Since coming to Canada, she has added a section on middle powers and non-permanent members of the Security Council to broaden the project’s relevance north of the 49th parallel.

“This is also not just about the peacekeeping and war-making aspects of international relations, but rather, an attempt to understand the broader ways in which international organizations shape our lives.”

Still, working on “the history of things that people don’t think have a history” meets many methodological challenges. The experiences of news by marginalized groups remains largely paltry or missing entirely from many historical archives, a lesson Tworek learned the hard way while researching her forthcoming book.

“One of the things I desperately wanted to find [was] how did people understand what was being printed, especially people of all backgrounds,” she recalled. “But for most people you couldn’t find that, so that was a lesson — the hard way — of the silences of history and the many groups who we cannot find.”

In Canada in particular, Tworek noted that Indigenous voices are not often found in archives of history in the same volume as the perspectives of settler Canadians.

“Very often, the archives don’t give you answers to the questions that you wish they did ... and you have to learn how to excavate history on its own terms,” said Tworek.

“We have to think about ways that we can try and represent these voices or find these voices in meaningful ways.”

Now, Tworek is working to inform current policy with her historical perspective on how decisions have come to impact media and democracy for decades at a time. She recently co-authored a report on addressing harmful speech online in Canada, a “fairly unusual thing for a historian to do.”

“Given the sorts of issues that I was working on, it was a fairly natural transition at this moment when our democratic institutions are facing new challenges,” said Tworek, noting that, as the report illustrates, many women and members of other marginalized groups find it hard to express themselves online due to fear of harassment.

“So how do we balance freedom of speech with the ways in which the internet is creating a platform that can crowd people out?” she asked.

“Theoretically, creative expression exists on the internet … [but] I’m showing with my history how that is and isn’t true.”