Our Campus: You'll hear If Not, Winter at the AMS Block Party 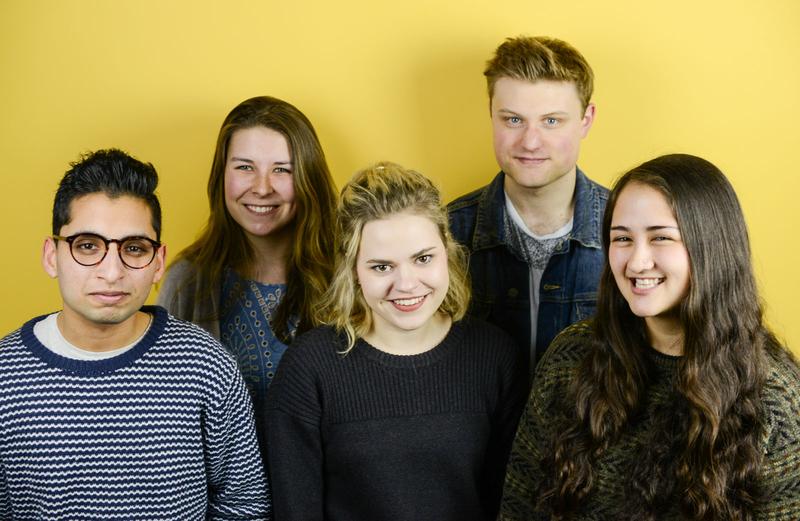 The current active members of If Not, Winter Joshua Medicoff

Having won the Last Band Standing contest, one of the UBC music scene’s hottest groups, If Not, Winter, will be your opening act at this week’s AMS Block Party. It will only be their third time performing as a five-person unit and they hope to show the crowd on April 6 that indie folk quirk pop can be “lit.”

The band is the first to admit that they formed serendipitously. Grace McRae, the band’s singer and guitarist, first brought together bassist Sawyer Junger and drummer Nick Babey to form her namesake band at the beginning of the school year.

“We played one show at the Pit and we kept building more momentum, improving all the songs. During that process, we included Sam [Stouten] on keys, Celine [Hounjet] on violin — so it was the five of us. Our drummer, Nick, went away to Scotland for a semester and that’s how we pulled in Neil [Saini], who is now our drummer,” said McRae.

As their member composition shifted, the band took on a new name: If Not, Winter. McRae, an English literature student and the main lyricist, is infatuated with the translated collection of poems by Sappho, an ancient Greek lyric poet. Finding a way to link the poems and their music, the band decided to name themselves after Sappho’s poem collection.

“It was perfect for our band because this poetry is in fragments, and a lot of our music focuses on the fragmented state of being and perception, and how all stories are fragments and incomplete,” she said.

Although all six official band members are students — and had previously met through the Blank Vinyl Project and other music circles — they began If Not, Winter as strangers. In fact, keyboardist Sam Stouten joined by spontaneously approaching the band at the end of a show.

“I saw them play one of their gigs at the Hatch, and I just went up to them and asked, ‘Do you want a keyboard player?’ We hardly knew each other at the time, but the pieces sort of came together,” she said.

Their unique sound — indie folk quirk pop — results from clashing musical interests and fearless forays into the unconventional. McRae, Stouten and Junger are proponents of indie folk and rock, but Hounjet and Saini have completely divergent tastes. As a result, If Not, Winter’s music is influenced by a wide range of genres, including hip-hop and electronica.

“We’re a folky band, [but we incorporate] things like random bars of 5/4, bass solos, weird breakdowns when we get a midi pad out — little things like that. So we’re folky, but something’s off about our folky-ness. That’s why we threw these words together and [it] makes sense,” the band said.

Thanks to — or perhaps in spite of — their unorthodox style, If Not, Winter outperformed the other five Last Band Standing finalists to take the top prize and the opening act at the Block Party. Although the band began planning for the contest back in September, the band members were surprised by their victory, as the event was their first live performance ever as a five-person unit.

“We did not expect to win. We just wanted the opportunity to kick it off at a show where we knew people would be as a way to start getting our music out there. It was a shot in the dark,” said Junger.

Despite its competitive nature, the AMS Events run contest produced a supportive environment for all involved, according to band members. They said attendees and contestants were there to enjoy each other’s music and company.

“We’re pretty good buds with System Skyline and all the bands hit it off. It was a supportive and inclusive community. I didn’t not expect it going in, but people were there to play music and have fun. Anybody could have won that thing and we would have been stoked for them,” said Junger.

But having secured victory, If Not, Winter is now looking forward to performing in front of thousands of students at Block Party. Although they got a practice run at Blank Vinyl Project’s year-end show, Goosehunt, on April 1, the AMS end-of-year event will only be their third performance. Despite this, the band is excited and looking forward to play their songs.

“We’ve been working on these songs since September, so now that we’re actually sharing it, we’re excited. People will actually be there!” said Junger.

After one of their small gigs during the school year, a friend and supporter, Sean Dhami, had some choice words for the band. According to Junger, If Not, Winter hopes to evoke a similar response from students at the Block Party.

“[Sean] was just there to support us. I don’t think he was really into the indie folk stuff we did. He grabbed me as we were coming down — he yelled, ‘I never thought indie folk could be lit, but fuck, you guys were lit!’”