Our Campus: Jakob Manning is Geering Up to create a more diverse and inclusive environment in STEM 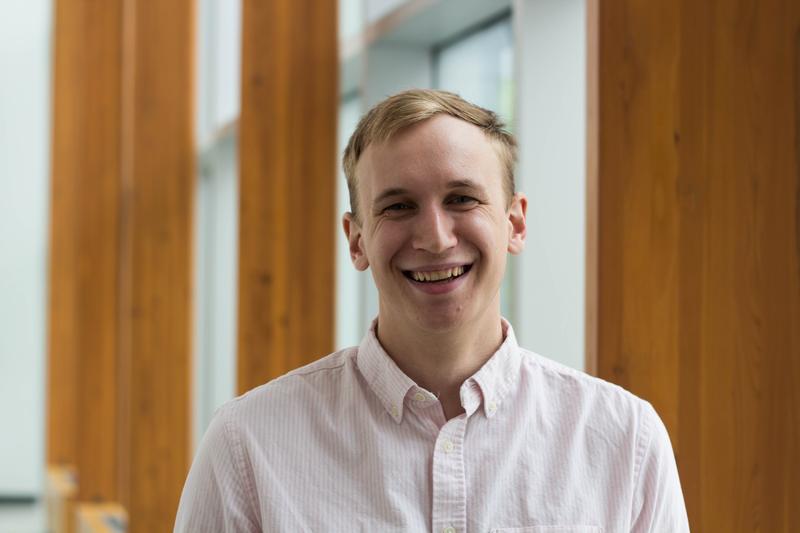 "I love science, I grew up in this community and I always felt welcome here — I want to extend that inclusivity to everyone else." Samantha McCabe

Going into science was never a question for UBC alum Jakob Manning — both of his parents are science teachers. Manning, who graduated from UBC in 2015, now dedicates his time to Geering Up UBC Engineering & Science, a non-profit organization that strives to promote science, technology, engineering and math (STEM) to youths.

“I was really lucky, [having two science teachers for parents] was the key for me being welcomed to the field of science,” said Manning. “I studied physics here [at UBC,] and it wasn’t until my second year when I realized that I would have the exact same degree as my mom.”

Everything seemed to align for Manning when he found a summer position at the UBC science-affiliated program Geering Up. He first started as a student instructor in 2012, then he proceeded to work his way up the organization the following years and eventually became the program manager, the position he currently holds.

“I was looking for something to do in my first summer [at UBC] … and I knew I was interested in science and … education. I was really lucky I found Geering Up because it is the perfect hybrid,” said Manning.

Manning didn’t need to look anywhere else for full-time employment after graduation because he was already involved in an organization that he felt was promoting his passion. In those six years, he has seen enrolment in Geering Up programs increase from 6,000 to 20,000 youths per year.

“It turned into a career for me,” he said.

Geering Up was founded at UBC in 1994 by a couple of mechanical engineers, and it has always been primarily run by university students who lead summer camps, workshops and community outreach programs that are designed to promote inclusivity in STEM-related fields to youths. Being a former university staff member, Manning stressed how vital the work of the student staff and volunteers are to the program.

“My goal in my position is to build the infrastructure necessary for students to step into a leadership positions and lead the program similarly to when I was a student,” said Manning.

He mentioned that the organization will always be led by undergraduate students and that they’re mentors to the elementary and high school students who take part in their programs.

“I think our student coordinator positions are some of the coolest jobs on campus. In terms of autonomy these students have and the degree of freedom to make an impact on their local community,” he said, noting that students both plan and teach their own programs.

Manning is proud of how much Geering Up has grown since he joined six years ago. It has expanded to many more centres and schools around BC, and “grown from a couple of students [on staff] to a few hundred,” he said. “Go where the kids are, that’s our motto.”

The focus on promoting STEM skills and knowledge, Manning explained, isn’t just a professional one for him, either.

“I think there are so many reasons to do this work. The least emotional one — the economical one — is that STEM fields are an area with some of the fastest job growth in Canada, and we don’t want anyone to be left out in that,” he said.

“The more emotional answer is that I love science, I grew up in this community and I always felt welcome here — I want to extend that inclusivity to everyone else.”

Manning and Geering Up specifically work on promoting the inclusion of those who are traditionally underrepresented in STEM fields, especially women and Indigenous youth. Its main goal is to connect with those who don’t envision themselves studying in STEM-related fields because of gender and cultural norms.

“We have been really pushing ourselves in the last five years to get off campus and to get out of the city and find youth who don’t already feel welcome in a university. Our Indigenous and STEM programs have been a focus of our growth in the last couple years,” he said, “[because] if you don’t have someone in your life who doesn’t already have a connection to a university, it is really hard to see yourself there.”

Manning hopes to continue working with Indigenous communities and co-developing programs with them, referencing how Geering Up is also working with Britannia Secondary School and the Vancouver School Board to help youth understand how science is connected to their local community and to incorporate Indigenous knowledge into the workshop curricula.

Geering Up has also been doing girls-only camps, which Manning hopes will work to end the underrepresentation of women in many STEM-related positions.

“I think it’s important that everyone feels important in the STEM fields,” said Manning. “The data is really bad when you look at the percentage of men and women in physics verses [in] arts…we’re not there yet.”

He mentioned that they found a “value misalignment” between young girls and science fields during their research when developing the program. According to their research, the average elementary school student describes a scientist or engineer as an “elderly gentlemen working alone in a dusty lab,” but Manning hopes that over time Geering Up can help break down these socialized occupational gender and cultural norms and can create a more inclusive learning environment for anyone who wants to work in STEM.

“We’re trying to create an inclusive and more friendly environment for everyone,” he said. “We’ve got huge plans for the future [and] there are many things we would like to do, but it just takes time.”