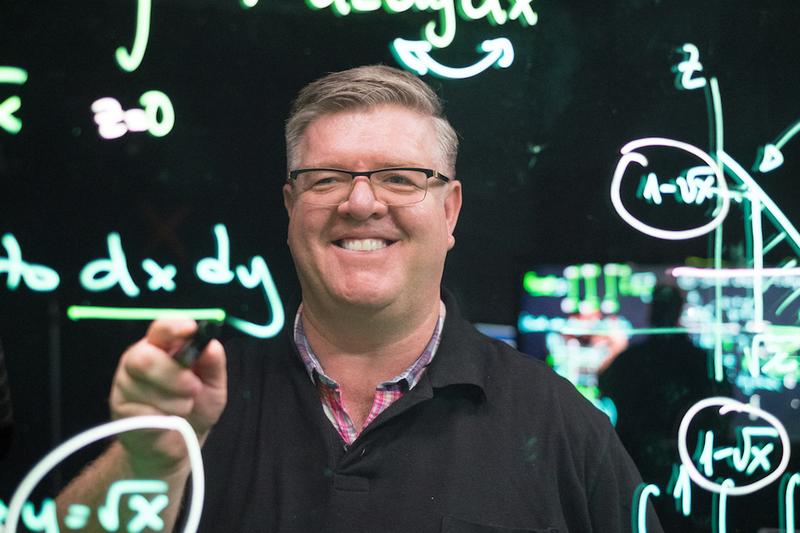 I’ve talked to dozens of people in my three years of writing for The Ubyssey, but I don’t think I’ve ever met anyone who’s had as much to say about everything as Mark Mac Lean.

From his admiration of epistemological anarchist philosopher Paul Feyerabend to his tendency to drink too much coffee and shitpost on Reddit, the UBC math professor is intriguing, intellectual and level-headed all at once.

While he’s currently the math department’s undergraduate chair, Mac Lean has worn many other hats in his 20-plus years at UBC. He was the Faculty Association’s president from 2014 to 2017 — a period which saw the hiring and subsequent resignation of former UBC President Arvind Gupta, followed by the hiring of current President Santa Ono.

He recently stepped out of his role as the academic director of the first-year orientation program Jumpstart, and was one of the founding faculty members of UBC’s Science One program, which puts registered first-year students through a coordinated set of math, biology, chemistry and physics classes.

He taught math in this program for 17 years. They’re all roles that he credits as collaborative efforts with his colleagues from the university. However, Mac Lean has made a point in not staying in any of these roles for too long.

“One of the things in my philosophy is that you have a certain length of time that you do something and then you should move aside and get some fresh ideas and energy in there,” he said.

Of all the work that Mac Lean has done, he considers his involvement with his colleagues in Science One as his proudest achievement.

“It was a nice opportunity to try something new, and probably most importantly for me is that it’s where I really learned a lot about teaching and learning,” he said. “So both by teaching with and watching my colleagues and what they did, and also the intense interactions with students and how they’re learning — thousands of hours of field work, learning about teaching and learning — I think that was a valuable experience.”

He’s less nostalgic about his time as the Faculty Association’s president. In his second year in this role, he guided the association through multiple controversies, such as the alleged academic freedom breach against Jennifer Berdahl, the human rights complaint filed against UBC over a sexual assault case and, of course, Guptagate.

“It took a lot out of me, to be honest,” he said. “It was straining on the institution. It didn’t have a permanent set of executives [and] it had many things coming at once, none of them small. So that period was very tense.”

After resigning from the role, he decided to get back into the classroom. He’s teaching MATH 104 in person, as well as a multivariable calculus class for engineering students that’s live-streamed over the internet.

“There’s a lot of flexibility,” he said. “They can review as much as they want, they can still ask questions. It’s an engineering class so … they’re a hardworking and pretty independent group of students. They find their peers they work with and they just get down to business.”

Speaking of the internet, Mac Lean is a well-known member of r/UBC, the university’s student-run subreddit. Though he generally comments on a variety of topics, many of his posts revolve around updates on registration for math courses. Since math courses fill up quite quickly, he has informed students when seats in a class are available, when new sections of a class are open, what students stuck on waitlists should do and how flexible the prerequisites are for certain courses.

He also has a tendency to “shitpost,” as he put it. One of his math course registration updates was written entirely in Yoda-speak, and his “modest proposal” to create math exam-writing uniforms with individual QR Codes printed on them to avoid cheating is an absolute doozy.

“I think it’s valuable for students to see the faculty as human beings too,” he said. “I have to manage a lot of ‘saying no’ to students, and I’m the guy who does all the discipline — I’m kind of like an old boring grey-haired mathematician guy. You sort of want to have a little bit of a softer side in there.”

Mac Lean has also been involved in co-authoring children’s books with Math Catcher, a program that aims to promote interest in math and science among Indigenous children. The books are five-to-ten minute animations that are narrated in a variety of different Indigenous languages by the native speakers of the language themselves.

“It’s an interesting project because I’m not an Aboriginal person,” he said. “You have to build relationships and be very mindful of what it means to engage with people in this way.”

When asked about what advice he would give to students today, he encouraged them to be risk-takers.

“University should mostly be a safe space for everybody to take risks,” Mac Lean said. “I do it in teaching and sometimes I fail. I fail a lot. Things don’t work out. It can be frustrating, but you’re never actually doing anything without taking those risks.”