Our Campus: SLC Co-Chairs Neema Rimber and Maddy Schulte are leaders in leadership 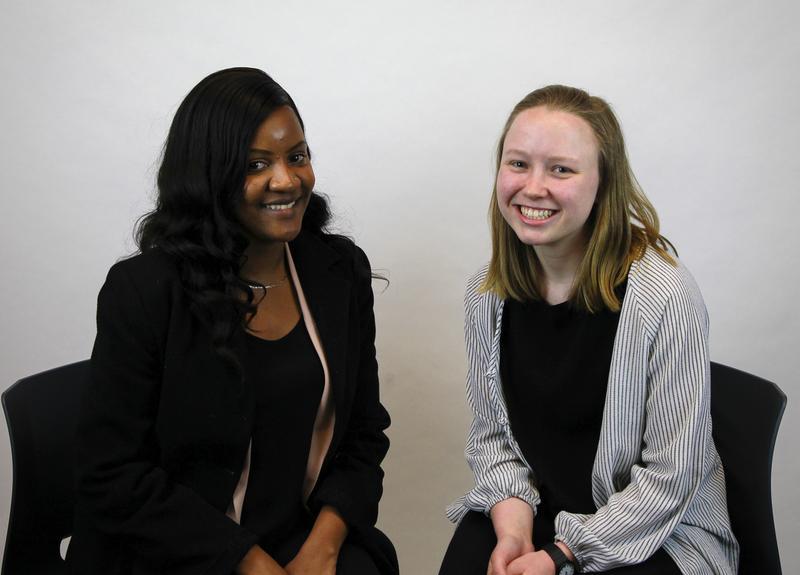 Co-Chairs Maddy Schulte and Neema Rimber know the importance of teamwork and communication from their roles as leaders of this year’s Student Leadership Conference (SLC) and how “it has been a huge part of [their] experience at UBC.”

Schulte, a fourth-year marketing student, became involved with the SLC in her first year. It has now become a constant in her university career — and a driving force in the lives of thousands more students. For Rimber, a Mastercard Foundation Scholar and a fourth-year economics and international relations student, this was her first time being a part of the organizational committee of the SLC, wanting to make an impact on the lives of other students.

Although Schulte’s previous involvement had given her a variety of experiences with the organization, it took her being a participant in the conference to finally apply for the co-chair position. “After attending the conference in my third year, I got really excited about seeing myself in the planning committee and seeing what opportunities there were for getting involved in the following year.”

Rimber, an SLC delegate through her previous three years of university, was encouraged by her peers and her involvement in residence life to apply for the co-chair.

Even with their years of involvement, this year’s conference proved special to them both.

“Speaking in front of a large crowd made me nervous, it was quite a large audience,” Schulte said.

“The speech was a big step in terms of how far I had come from when I was in first year when I couldn’t even speak in class discussions. It was phenomenal to see that growth,” added Rimber.

2019’s conference theme was ‘Beyond Your Lines,’ something of great importance to both chairs. Schulte described the theme as “motivation to push people to try new things that maybe they’re uncomfortable with [and] see the potential for growth that can come from that. Whether that’s trying something new, talking to someone new or reaching your hand up in class.”

“Speaking in front of that many people was definitely going beyond my lines for me. I think it’s different for everyone. I think it can apply to a lot of different aspects of student life,” she said.

Organizing the conference didn’t come without its complications. In a team of 20-some students, it was challenging to bring that many people with diverse ideas to work on a singular theme. The main issue concerning members was becoming set on specific ideas and not wanting to change — an obstacle that the co-chairs overcame through honest and clear communication.

“Teamwork has been overarching. It’s about looking at what the team wants versus what the individual wants,” Schulte explained.

Rimber remarked on how incredible it was for her to be able to witness the coming together of the team.

“You feel inspired and you feel challenged seeing your fellow student leaders doing these amazing things, showing different approaches to leadership and to handling different situations … Despite all our differences, we all wanted to see our conference be impactful and for it to be able to communicate our values.”

For Rimber, a memorable moment from the conference was being able to see how “everything had seamlessly come together. Everyone had worked together and this was indicative of that team dynamic.”

Rimber spoke about how she was surprised by the emotional toll of the job. “It is very important to take the time to laugh and acknowledge that the work makes you happy. It is an extra element of mindfulness that really helps create that balance.”

The chairs added how some of the most important lessons they came away with involved knowing how to communicate both professionally and effectively.

“When you’re in a team there are benefits of actually communicating when you’re struggling and there’s people around you who want to support you… I’m grateful for the SLC to push me to be more communicative about where I’m at with, what I’m working on,” said Schulte.

“Sometimes you have to speak up and speak up more than once to have your point of view heard and have people understand as well as the patience to allow people to see that and trying to assume that people have the best intentions,” said Rimber.

Both chairs have found friends and mentors in their time with the SLC, something which offered them the chance to develop professionally, allowing them to figure out what they want to do after they graduate.

“I’ve really liked working with the staff members we’ve got to work with. They’re all wonderful. Students don’t usually get to work with staff that closely and that was definitely one of the benefits of being able to work in that space,” Rimber recounted.

Around 1,200 students participate every year to become involved in making the lives of other students better and to improve their own leadership skills. “It’s inspiring to me that so many students care that much about how the campus is doing,” said Schulte. “I would hope that professionally it offers some sort of direction to students, how they want to use the skills they have in their futures.”

On their hopes for the SLC’s future, Schulte spoke of the benefits for interpersonal connections and Rimber touched on the potential for development, on the part of attendees.

“I hope people meet new people at the event too — meeting people in different faculties and using each other as tools to make things happen,” said Schulte.

“My call to action would be for people to challenge themselves, to seek out different opportunities and to be engaged.”