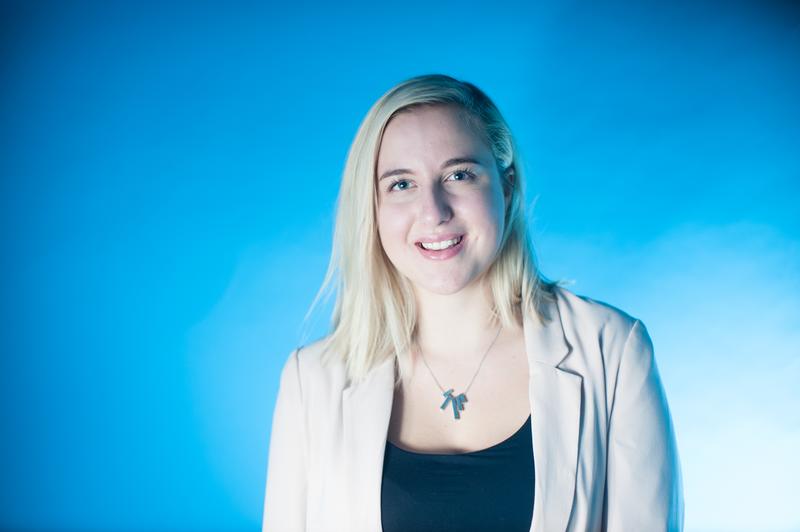 Before she became the chapter’s leader, Schumacher first joined Her Campus largely by chance. Patrick Gillin

For as long as she can remember, Samantha Schumacher has wanted to be a writer. The newly-elected president of Her Campus, Schumacher aims to make the UBC chapter of the women-centric media platform bigger and better as it strives to give women across the country a voice.

But before she became the chapter’s leader, Schumacher first joined Her Campus largely by chance.

“My RA at UVic was the president of Her Campus at UVic and told me about it,” said Schumacher, now a third year political science major at UBC. “I went to a couple meetings, had fun with it, and here I am.”

Founded by a team of female Harvard students in 2009, Her Campus is an international media platform and website tailored towards college life. Just eight years later, Her Campus boasts 7,000 contributors and 300 university chapters across Canada, the United States, Japan, Australia and beyond.

For Schumacher, the appeal of Her Campus was its openness — a platform to give women like herself the voice they may often lack.

“I like the idea that Her Campus is done by and for college women,” said Schumacher. “Anybody can write for Her Campus. You don’t have to be an amazing writer or anything.”

While Her Campus chapters function relatively independently, they can also choose to collaborate on pieces, share ideas and even cross-publish. Even though the UBC chapter only includes 15 members, Schumacher says that any post has the potential to be uploaded to the publication’s national page. That means that an article written by a volunteer can reach hundreds of thousands of readers, regardless of the writer’s background.

“It gives everyone a voice for those who might not have that opportunity elsewhere,” said Schumacher.

Like every Her Campus Chapter, UBC’s posts weekly features on community members, whether they be professors, students or alumni. Otherwise, Schumacher indicates the platform is as open as they come.

“If people want to come and say ‘Hey, I want to write a series about this,’ I’m open to taking those new ideas and moving with them,” she said.

“You can write about anything.”

Indeed, the range of topics featured on Her Campus are as far-reaching as its writer base. Publications range from in-depth features on recent politics to Buzzfeed-esque “listicles” about personal health; from lighthearted stories to intensely focused personal opinions.

“One article can be an opinion on Trump’s response to Charlottesville, and another can be how to make your hair grow longer,” explained Schumacher.

Additionally, the UBC branch of Her Campus is non-partisan, welcoming submissions and opinions from across the political spectrum.

“I want to make sure that we’re balanced,” stated Schumacher. “I don’t just want opinions [from people who are] left or right leaning, I want a mix of both — I want people from a variety of backgrounds writing our stories.”

Schumacher also stressed that despite Her Campus’ women-centric focus, people of all gender identities are welcome to contribute.

“We actually have a person who identifies as male, and he is a chapter head for one of our other chapters,” she remarked. “Anyone can write for Her Campus and anyone can join. … We don’t discriminate at all.”

Speaking to Schumacher, you get the impression that the secret to Her Campus’ reach is its laid-back, anything-goes organizational structure. Even the editing is laissez-faire — contributors are coached to make their argument shine, but never at the expense of losing the authenticity of the writer’s voice and opinion.

Schumacher acknowledges this can be challenging.

“Even though we are giving everyone a voice and it’s not monitored journalist-style, I want to make sure everything that we publish is true,” she stressed.

In addition to Schumacher, the UBC chapter has three other editors who ensure that articles pass the journalistic smell test. But not every Her Campus chapter has the same standards.

“There’s been some articles that I’ve read from other Her Campus editors that I really don’t agree with,” admitted Schumacher. “But I still respect their right to post what their thoughts are.”

As Schumacher heads into the real beginning of her tenure, her goal is to leave the UBC chapter bigger and better than ever. She stresses that while the club hosts meetings on a weekly basis, they accept commitments of all sizes, whether it’s a one-time writer or a weekly contributor.

“You don’t have to come to the meetings every week,” says Schumacher. “It doesn’t have to be a huge commitment, and it’s ultimately whatever you make of it.”

“I just want to make sure that it stays true to what Her Campus is all about — giving women a voice to write about whatever they desire.”