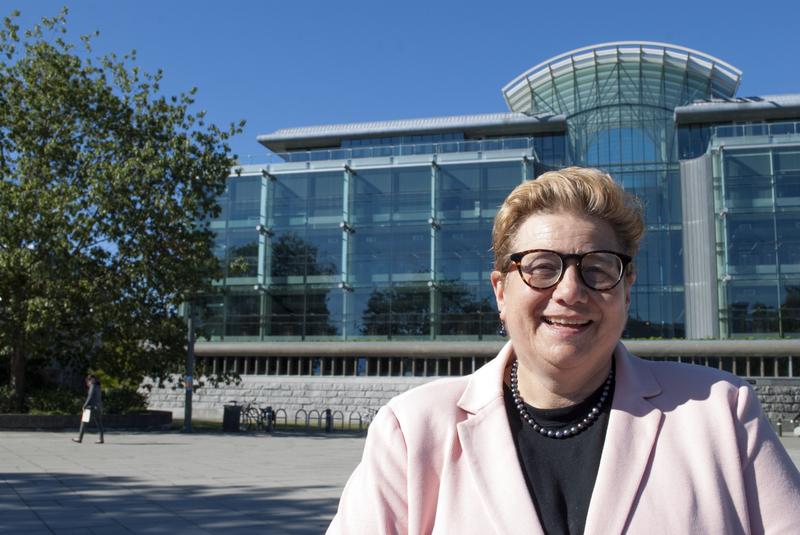 As methodical as her discipline, Susan E. Parker has wasted no time getting down to business since she began her role as UBC’s new university librarian in September. Parker, who was formally appointed this past June, met with the dean of science to discuss his faculty's needs within her first month. Even before that Parker went for a tour at the education library to begin getting aquainted with the vast UBC library system.

“A typical day for me right now is just really learning about the university,” said Parker. “So I’ve been making appointments with different deans to talk with them about their schools and what they need from the library and to learn about what they do.”

Parker’s job is a big one. In her position as university librarian — a very similar role to a faculty dean — she is in charge not only of all the physical libraries on campus, but also library staff and all of the library’s content across its massive, cross-disciplinary system.

“My job is largely administrative,” she said, noting that much of her position is about ensuring that the library continues to recieve funding in order to acquire new content, database licenses and equipment. “It’s really… making sure that the lights are turned on.”

Before her appointment at UBC, Parker’s career in the United States spanned from coast to coast. Beginning her career at a law firm on Wall Street in New York City, she discovered the possibility of library sciences as a career. After getting her library sciences degree from Queens College of the City University of New York, she worked at several universities, starting at Tufts University in Massachusetts as the government documents librarian. She then took up a position in charge of the public services at Harvard Law School Library.

“It was a really wonderful place to be,” said Parker of her time at Harvard. “But you know, after awhile you need to challenge yourself.”

After 12 years at Harvard, she was offered a position at California State University Northridge, in the wake of the 1994 Northridge earthquake. The earthquake destroyed many of the buildings on campus — including the library. Soon after, Parker was hired as the associate dean in 1997 to oversee the rebuilding effort, but she found that the position required a lot more than just that.

It was her experience in a workplace dealing with the aftermath of a devastating natural disaster that led her to her theory of “credible optimism.” For Parker, in order to be a credible and effective leader — especially during challenging times — the most important thing is to tell the truth.

“I think that there’s always a way to be optimistic about it,” she said. “I was there [in Northridge] saying, ‘you’re right, it’s never going to be the same.’

“But we have to just keep going ahead because there is an ahead and there is a tomorrow. And we have to keep tomorrow together.”

Her own commitment to honesty aligns well with one of the central aspects of a librarian’s job – organizing and analyzing information. Though it may often seem like libraries run themselves, there’s a lot of work being put in behind the scenes — and screens — to ensure that the information that’s available is trustworthy and current.

While it may at times appear that the internet age has begun to make libraries obsolete, the opposite is true. A librarian's job is to evaluate information, a role that has become even more important due to the sheer amount of information online, according to Parker.

“The details of how it’s served up may change over time,” said Parker. “But the heart of librarianship is still about making sure that people get what [information] they need with as little trouble as possible.”

Parker’s goals for her five-year term as university librarian are still taking shape, and she acknowledges how much learning she still has to do with regard to UBC’s capacities. Many of the challenges of the role include legal and copyright issues, how to handle Open Access information and how best to tackle the management of all the research data that the university produces — but the biggest challenge is funding.

“The financial pressure on the library continues,” she said. “We have to [make sure] that the university – and that includes students as well as faculty – understands the issues we’re facing.”

Parker has already begun reaching out to donors. Her first steps are to align the library’s goals with the university’s as a whole, in addition to finding out what students, faculty and staff most want and need from the library. Once that happens, there will be room to develop larger projects, like work from her previous positions which includes the curation of collections of work from costume designer Eiko Ishioka and photographer Barbara Morgan at the University of California, Los Angeles (UCLA).

Ultimately, her focus is making sure that the library is able to provide what everyone on campus needs from it.

“Every individual person has their own definition of [the library] because they have their own experience of it,” said Parker.

“The library has to be ready to provide that for you, whatever point you touch it at.”