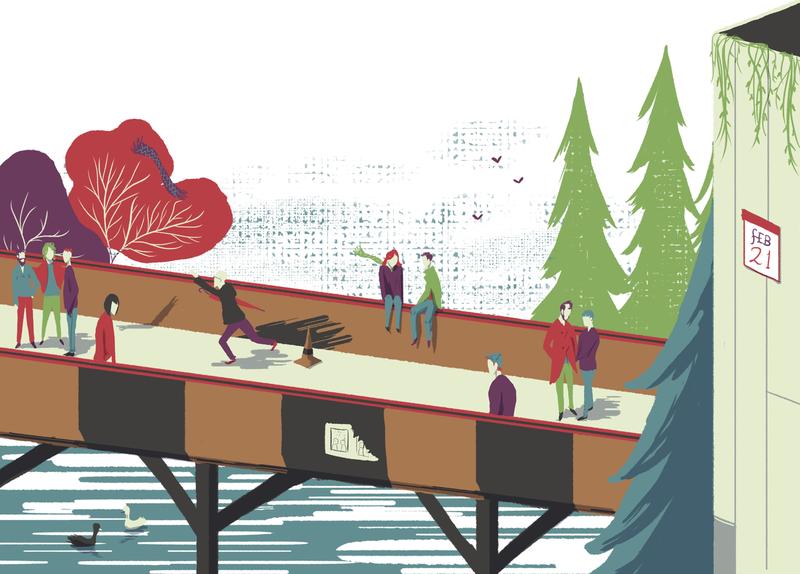 Introduction: These perspectives are from those around campus who felt comfortable sharing their thoughts on their positions in terms of sexual and romantic interests. These perspectives were open-ended to the authors and those who wrote volunteered what information they felt was pertinent to be shared. We hope this section offers a space for anyone at UBC to relate experiences and thoughts that they see as impactful, and to expand in future issues. These short perspectives are not meant to be representative of the spectrum of sexualities on campus and in the world, nor are the experiences intended to be relatable to all students on this campus.

A few weeks ago, my straight friend’s girlfriend awkwardly admitted to me that my friend felt uncomfortable being around me because he thought, that I thought, that he was hitting on me the first time we met. I’m sorry, what? Are you that uncomfortable with your own sexuality that you think because you’re nice to another guy he’ll automatically think you’re hitting on him? When did sexuality become the determining factor whether people are nice to one another? If that thought is not oppressive, discriminatory and completely offensive, I don’t know what is!

I may like men, but that does not mean I like all men. My sexuality works exactly the same way my friend’s straight, white, male, sexuality works. This is a misconception among people who don’t identify as gay — we are not all thirsty nymphomaniacs waiting to pounce on every guy who gallops past us. Please remember this if you remember anything from this thought.

The gay community, unfortunately, is known as particularly sexually active. I will be the first to admit that I have been perpetuating this stereotype, but it bothers me because it’s not true. Yes, many gay men like to have sex. Why wouldn’t we? I would assume that there are significantly more heterosexual people in the world who have so called “loose morals” when they enter the bedroom than the homosexuals in question. So, stop assuming that I’ll hook up with your other “gay best friend” just because I am gay. I actually have particularly high standards and I do not like being set up with every gay person you know because apparently you think it’s harder for us gays. I can take care of myself thank you very much.

To respond to my friend’s worry, I never thought he was hitting on me. I just thought he was being genuine, which is a personality trait I respect. Though, you need to realize that I am not attracted to you. Frankly, I don’t really know how to interact around you because apparently, based on your thoughts, gay people make you feel uncomfortable. So be careful what you think and how you iterate that thought through your words, because saying things like that will only push a great group of people further away from your straight, white, male, self.

The first thing I learned as a woman confused about her sexuality is that a lot of other women are too.

I can remember as a teen reading articles about how women find other women attractive, regardless of whether they’re heterosexual. Women are just beautiful, they exude natural appeal, I remember reading in one magazine. The thesis of this article was — whether I realized it at the time — “Don’t worry, you’re still straight. Don’t think too much of it.”

Fast forward to university and I’m enjoying certain drunken experiences way too much, but now the rhetoric has become, “You’re just experimenting.”

“Don’t worry, you’re still straight. Don’t think too much of it.”

Perhaps there’s a better label other than pan to apply to myself, but from what I’ve learned as your average, confused woman, pansexuality is most closely reflective of my preferences.

After two relationships and several more sexual encounters with women – though no relationships with females – I came into my twenties with a better understanding of how I identify, and also that it’s OK. There is no normal. Normal is a social construct. Your sexuality is exactly what you’re supposed to be.

And yes, your sexuality exists. Pansexuality is not experimentation or something all women identify as. It’s a distinct sexuality. Essentially, gender for me isn't a determinant of why I’m attracted to someone. It’s much more to do with who they are. I can be romantically interested in a guy and sexually attracted to a girl, and vice versa.

This isn’t an advice manifesto, nor is it reflective of everyone’s experience. But the normalization of women finding other women attractive has brought us to a point where pensexuality can be erased or invalidated at every turn. All I have to say is, we exist.

“To me, being bi means I can appreciate everyone’s butts” — that’s how I opened my 2014 TEDxTerryTalks. I remember the room laughing and clapping in agreement. Everyone thought it was a good joke. Bisexuality, at its core, is that simple.

Of course, from this very simple understanding, people go on to define their own bisexuality. Just like how some love a good laugh, some bi guys love large rim glasses on guys while loving dimples on girls. Neither does defining oneself as bi “restrict” one to the gender binary. But you might ask, “What about pansexuality?” Many do identify as pan and that’s completely fine. Pansexuality’s existence doesn’t diminish bisexuality’s existence.

Unfortunately, there is a common sentiment to try to classify everyone as either gay or straight. And a bi individual navigates through that every day. This summer, while I was searching for a new place to live, I was point blank asked by my potential landlord whether I was gay or not. I answered truthfully that I wasn’t, but realized that they wouldn’t have given me the place had I said yes. When I was offered the place, I politely said no and moved on. Overall, I’m fortunate though.

None of my friends question me over my romantic interests. Many other bi individuals are not as fortunate. Even in Canada, bi individuals — regardless of their gender — consider suicide at a rate much higher than either gay, lesbian or straight individuals. Is it because bisexuality is not as understood? Is it because it becomes easier to put pressure on them to be “straight”? I don’t have an answer to these question. But there is one thing that’s clear to me. Bisexuality doesn’t have to be as complex as people make it to be. At its core, bisexuality is simple.