House of cards: Dozens of campus buildings liable to collapse in quake 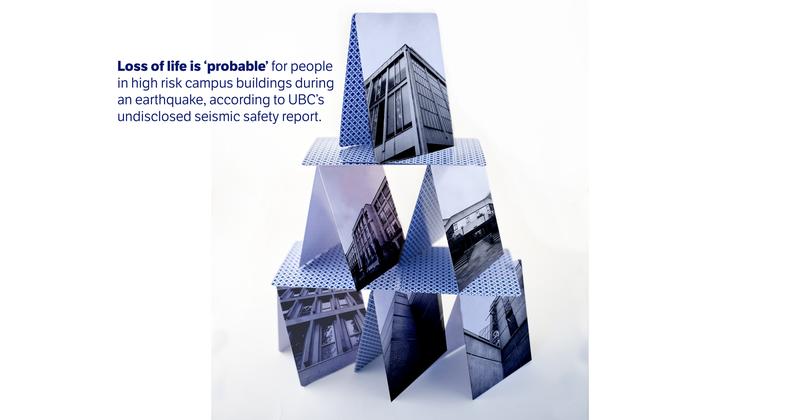 Loss of life is ‘probable’ for people in high risk campus buildings during an earthquake, according to UBC’s undisclosed seismic safety report

At least two dozen campus buildings are at serious risk of collapse during even a moderate earthquake potentially putting thousands of students, faculty and staff at risk of death and injury according to documents obtained by The Ubyssey

Major classroom blocks including the Hebb, H.R. Macmillan and Leonard S. Klinck buildings are “likely to have full or partial collapse” in a moderate or greater earthquake with “loss of life probable.” Other structures rated as “Very High Risk” by the university include Thunderbird Stadium, part of the Museum of Anthropology and the campus power station.

While the university says it has acted aggressively in recent years to retrofit and demolish seismically unsound buildings, nearly $400 million is needed to make the remaining buildings safe according to UBC’s “Proposed Seismic Upgrade Plan” provided to The Ubyssey.

In the meantime, university officials say they are focused on raising awareness of earthquake safety measures like “drop, cover and hold on” as well as encouraging students living in residence on campus to keep 72 hour earthquake kits on hand.

“This is a risk that’s faced across the Lower Mainland,” said John Metras, head of Infrastructure Development at UBC. “We take the safety of our students, faculty and staff as the first priority and we take it very seriously.”

Experts put the risk of a major seismic event — an earthquake measuring 8.0 or higher on the Richter scale — occurring in the Lower Mainland over the next 50 years at around 10 to 15 per cent. For perspective, that’s roughly the same odds of drawing a red M&M candy from a package.

Include moderate seismic events — earthquakes measuring 5.0 or higher — and the odds climb to at least one in three over the next 50 years. That’s roughly the same odds as drawing a red, yellow or green M&M candy from a package.

“It’s just a matter of when,” said Chris Goldfinger, a geology professor at Oregon State University and leading expert in the Cascadia subduction fault which lies about 200 km off the coast of British Columbia. “As far as the level of certainty goes on the next one, it’s 100 per cent.” Chris Goldfinger on earthquake prediction

If such a quake hits Point Grey within the next 10 years, it’s almost guaranteed that major campus buildings will still be at risk of collapse.

For example, the Douglas Kenny Building, which houses the psychology department, is ranked as “Very High Risk” according to the seismic safety report and is in need of a nearly $6 million seismic upgrade. However, the university has no current plans to retrofit the building ranking it as a “Long-term” project with a targeted completion date “TBD.”

According to the seismic report, the Douglas Kenny Building’s bridges “will collapse” and the eastern wing “will undergo significant torsion with column or wall failure likely.”

The H.R. MacMillan Building, with classrooms accommodating nearly 600 students, is likewise at risk of collapse due in part to “significant lack of walls” and an expected “shear failure” in the building’s structural columns.

The university hopes to retrofit or rebuild MacMillan by 2025, although making the building seismically sound would cost $15.6 million with another $22.46 million in deferred maintenance added to the expected total. Also, the 2025 completion target is tied to “Capital Plan” funds, the source of which “are prospective only at this point,” according to Metras.

Buildings were ranked as high or very high risk if they met a combination of five bullet points. Both sets of ranking criteria included risks of full or partial collapse with “loss of life probable.”

“Campus stands a good chance of doing well in an earthquake,” said Carlos Ventura, director of the Earthquake Engineering Research Facility at UBC. “Nevertheless, once a building collapses you can lose lots of people and you don’t want that.”

According to UBC’s Chief Risk Officer Ron Holton, the seismic safety report has never been made public. The Ubyssey discovered its existence through a reference in a letter then-university president Stephen Toope wrote to British Columbia Premier Christy Clarke in 2012 that was obtained through a Freedom of Information Act request to the provincial government. Despite Holton being cced on Toope’s letter, the risk management office initially told The Ubyssey in an email, “We are not familiar with that report and don’t have access to provide you with a copy.”

After several more inquiries, UBC Public Affairs agreed to release the report as part of a meeting with Holton and Metras, the Infrastructure Director.

“We want to be as open and transparent about this as we can,” Metras said during that meeting. Not publicizing the report or seismic safety levels of specific buildings on campus was part of the university’s strategy of encouraging universal preparedness, he added. “Earthquakes are unpredictable and the actual outcome is ultimately unpredictable. So we need to communicate a common message to the whole campus.”

Holton noted that his office has always sought to respond accurately to inquiries from offices in specific buildings about their level of risk.

Calls for transparency and awareness

Ventura said he believes the university should transparently identify seismically unsound buildings by posting warnings at the entrances — a practice known as tagging.

“The reason you tag a building unsafe is because you want to allow the people to make a decision,” Ventura told The Ubyssey. “In my opinion, I think we should do it.”

Ventura acknowledged that tagging buildings is a fraught task because it implies that buildings without warnings are definitely safe when in fact the unpredictability of earthquakes makes such a determination nearly impossible.

But tagging might also raise awareness on Point Grey which is part of a region where seismic safety awareness is far below that of places like Japan and even California. These places have frequent moderate earthquakes serving as a reminder of the potential damage possible from larger events.

Goldfinger, the subduction zone expert, noted that the Pacific Northwest has little of Japan’s safety-first ethos with the island nation investing in advanced earthquake warning systems and even relocating entire towns out of tsunami zones.

“Here it’s a little bit like going back in time to a place where people have no knowledge of earthquakes,” Goldfinger told The Ubyssey.

Goldfinger said studying the Cascadia Fault can be “a little bit creepy.” Despite what he’s discovered in researching the subduction zone, there’s a high statistical probability that cities like Vancouver, Victoria, Seattle and Portland will be hit by a massive quake and suffer Hurricane Katrina-like effects. The general public remains woefully unprepared.

“I’ve been to Sumatra, I’ve been to Chile, I’ve been to Japan and I’ve see the aftermath of all these big earthquakes,” Goldfinger said. “In the Pacific Northwest we’re in the before picture right now — and we already know what the after picture is going to look like.

Of course, making the risk of earthquakes real for people in the Lower Mainland — including among the campus community — is inherently challenging given that the science of earthquake prediction is no stronger today than when it was first attempted decades ago. Instead, the best scientists can do is rely on past statistical data to find the probability of a seismic event occurring. The smallest meaningful denomination of window for statistical probability is within 50 years. When it comes to public understanding of such risks, probabilities are not well understood.

“People don’t reason well about probability information,” explained Luke Clark, a UBC psychology professor who studies gambling and risk tolerance. “Probability is a relatively recent development for us as a species.

Goldfinger said he doesn’t expect the population of the Pacific Northwest to take serious action in preparing for a major earthquake until it’s too late.

“Human beings are not necessarily all that great at learning these lessons without getting smacked first,” he said. He’s hopeful we may learn after the first wave of catastrophic destruction sweeps through the region rather than needing to wait hundreds of years beyond that.

The fault in our race

Despite a certain level of public apathy, university officials say they are committed to making the campus seismically safe. UBC shifted its insurance to a provincially-sponsored program in 2013 leading to about $2.5 million in average annual savings earmarked for a dedicated campus “Seismic Fund.”

Construction is currently underway on the Hebb Building complex and, with provincial support, a new undergraduate biological sciences teaching laboratories project is expected to renovate some seismically unsound buildings. This will allow for the vacating of buildings like D.H. Copp. Metras said the province has also helped fund upgrades to the old Chemistry Building and Buchanan Arts Faculty Complex.

Holton, the risk manager, said the university is aware that its seismic safety campaign is not reaching a wide enough audience and hopes to recruit faculty to spread the message to their classes during the ShakeOut BC earthquake awareness day in October.

Metras acknowledged that the cost of renovations, seismic upgrades and deferred maintenance reaches almost $400 million. The logistical challenge of accommodating students and faculty during construction mean that many buildings will remain in their current state for the foreseeable future.

Metras said the university has spent $26.5 million on campus seismic upgrades since 2003 and plans to spend another $36 million through 2027.

“Even though we’d love to do it all at once, it’s just logistically not possible nor is it

financially possible,” Metras said. The university attempts to prioritize construction that will further academic goals and, in cases of seismic safety, protect the most lives at the least cost.

Aaron Bailey, president of the AMS, said that as part of their attempt to improve Safewalk and keep the Sexual Assault Support Centre open at all hours, the society has lobbied for university funding to keep The Nest open 24 hours as a central muster point in case of an earthquake or other emergency on campus. The primary emergency reception centre on campus is the Tennis Centre.

Bailey added that he’d like to see the university focus on making structures safe before proceeding with new construction.

“With all the big buzz we’ve seen about the big one, it’s a no-brainer we should be investing our capital in making buildings safer,” Bailey told The Ubyssey.

It’s hard to say whether UBC will complete the seismic upgrades soon enough to keep students, faculty and staff safe because of the unpredictability of when an earthquake will strike Point Grey and what will happen when it does. Ventura, the earthquake researcher at UBC, said given the complex seismic landscape of British Columbia, it is hard to know what a major earthquake on campus would look like. While the Cascadia Fault would produce a much stronger earthquake and might last for several minutes, an earthquake emanating from a fault closer could do more damage in a shorter window of violent shaking.

Ventura said that for the buildings labeled as “High Risk” on campus, it is impossible to know whether “collapse” will look like sections of auditorium hall ceilings falling onto the seats below or a “pancake” collapse where the structures are reduced to piles of rubble.

“Earthquakes are strange animals,” he said. “You should at least know what the risks are.”