Places to Go: A few bites of the Big Apple 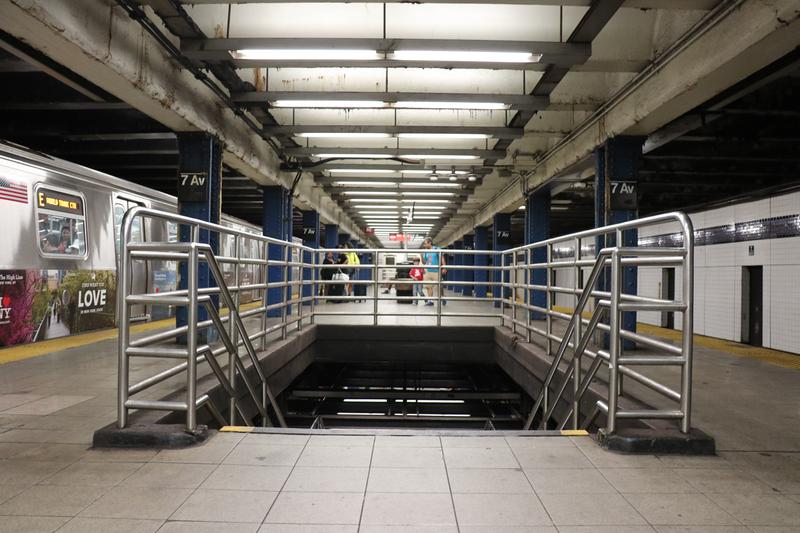 The subway, but not the sandwich shop. Sophie Galloway

Exiting your airplane at the Newark International Airport feels like being shot out of a cannon. From the moment we landed, the grime and noise of the East Coast was everywhere. We got in around 4 p.m., just in time to catch the thunderstorm we’d been dreading since we left Vancouver.

Our flight that morning had been an early one, and the coffee at Dunkin’ Donuts somehow made things worse. My girlfriend, Sophie, and I had been planning this trip all summer so it’d take more than some bad coffee and a bit of rain to ruin it for us.

Freshly showered and filled with determination, we hit the town. Sophie and I have been together for close to two years now, so she’s used to my priorities when we travel: food. That being said, we took the subway down to Greenwich Village to get pizza.

It was already dark by the time we made it out of the hotel that night so the city felt shapeless — the buildings didn’t seem to have a form outside of the lights dotting their windows. Waking up the next morning, the city unfolded beneath us. Our room was on floor 58, giving us an unbelievable view of the city, its architectural styles stacked one on top of another. We could see the trash-can-inspired 432 Park Avenue and the beautiful, pre-war apartment buildings lining Central Park East. 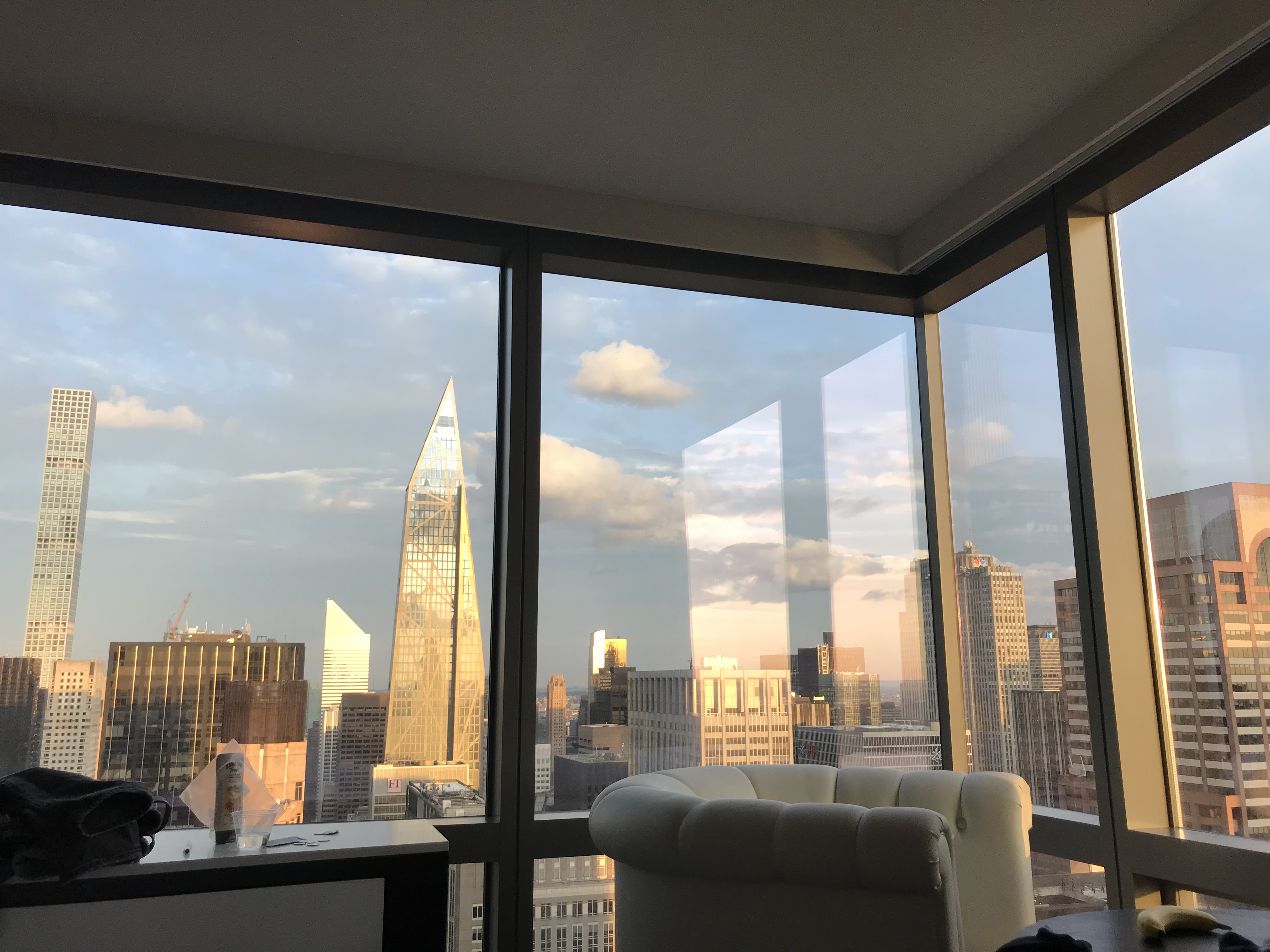 Sophie was busy that morning, so I took the subway up to 74th Street and got us the famous chocolate chip walnut cookies from Levain. I ate the softball-sized lump of cookie dough as I made my way through Central Park on the way back to the hotel. We had two very important plans that afternoon: dinner at 6:30 at Momofuku Nishi, followed by a Tame Impala concert at Madison Square Garden. By the time I got back to the hotel it was noon and neither Sophie nor I had eaten a proper meal.

We left our hotel to get food, and walked out into a solid wall of hot air. The subway didn’t help, nearing 35 degrees on the platform (or 40,000 Fahrenheit). We made it out to Williamsburg, one of the first neighbourhoods hit by the wave of gentrification that swept through Brooklyn in the mid-to-late 2000s. These days, the neighbourhood that was once known as a home for thriving Hasidic Jewish, Puerto Rican, Italian and Polish communities has an Apple store in a converted warehouse. Closer to the river, the sprawling VICE offices take up 75,000 square feet in a converted sugar factory.

We ate a memorable breakfast at Rabbithole, but had no time to dawdle. Taking a quick walk along the banks of the East River, we made our way back through Williamsburg, pausing to peer in the window of the Peter Luger Steakhouse, like a pair of modern Charlie Buckets. On our way back to Manhattan we stopped at Joe’s Pizza, a pocket-sized restaurant that’s been on Carmine and 5th since 1975. 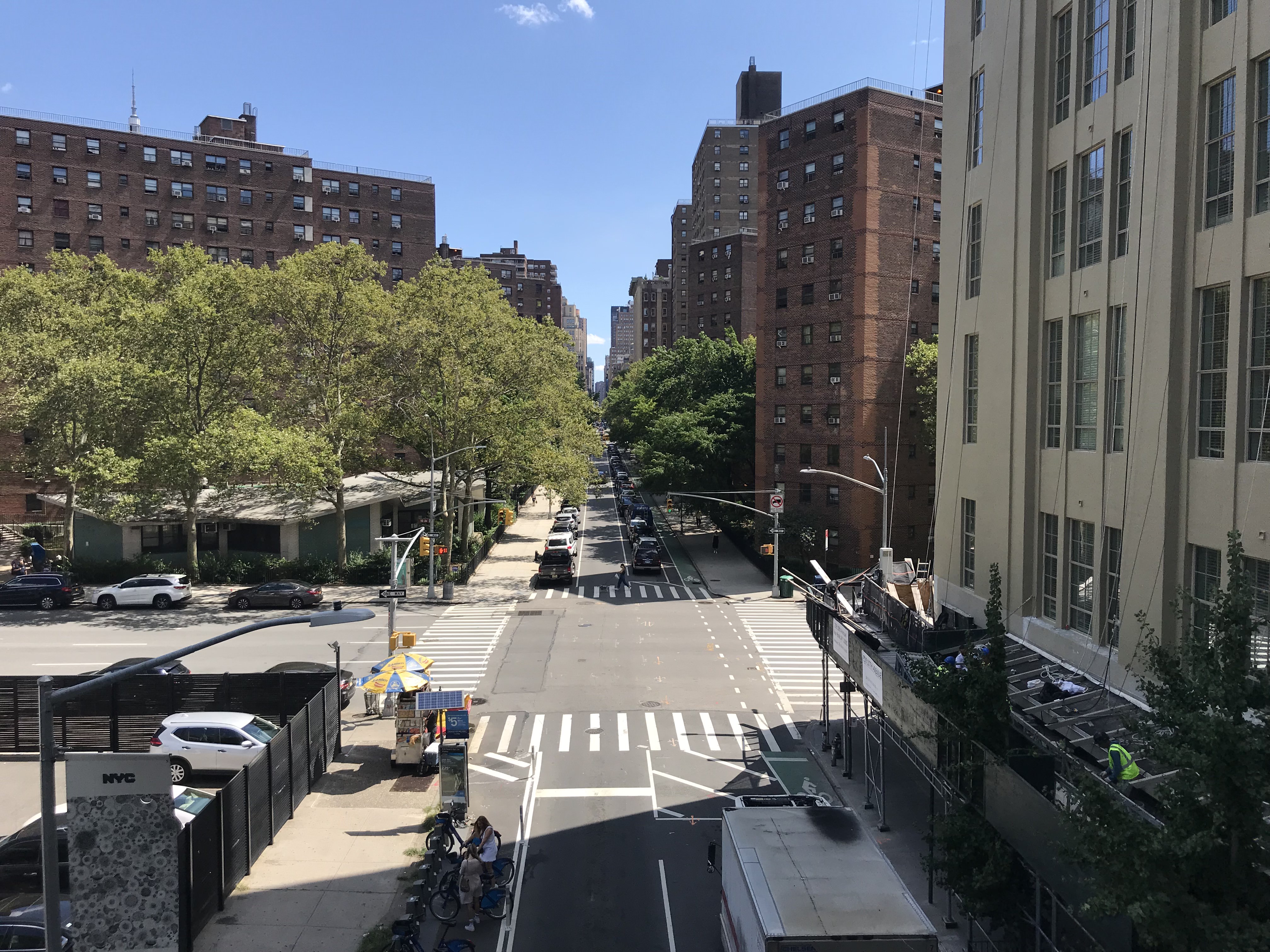 For our next slice we took our cues from the movie Elf. The titular character, Buddy, finds out that his naughty-listed father is living in New York. Buddy resolves to find his dad, and Santa Claus offers some sage advice, telling Buddy that there are many Ray’s Pizza places and that they all claim to be the original. According to the benevolent Father Christmas, the real Ray’s Pizza can be found on 11th Street.

True to Santa’s word, you’ll find the best slice of pizza on Earth sitting in that green building, and the celebrity endorsements are there to back it up. No fewer than two photos of Steve Tyler adorned the walls. The cheese slice tasted like a thin-crust piece of nirvana.

High up on the list of New York tropes is a concert at Madison Square Garden, and we had precious few hours until Tame Impala took the stage. In Chelsea, we ate an incredible meal at Momofuku Nishi, a pasta-focused outpost of restaurateur David Chang’s empire. After our meal of crab tagliatelle and pig skin ragu, we hurried back to our hotel as the sky opened up — the rain had returned, soaking us through. We dove into a cab, barely making it to the Garden before the band played. 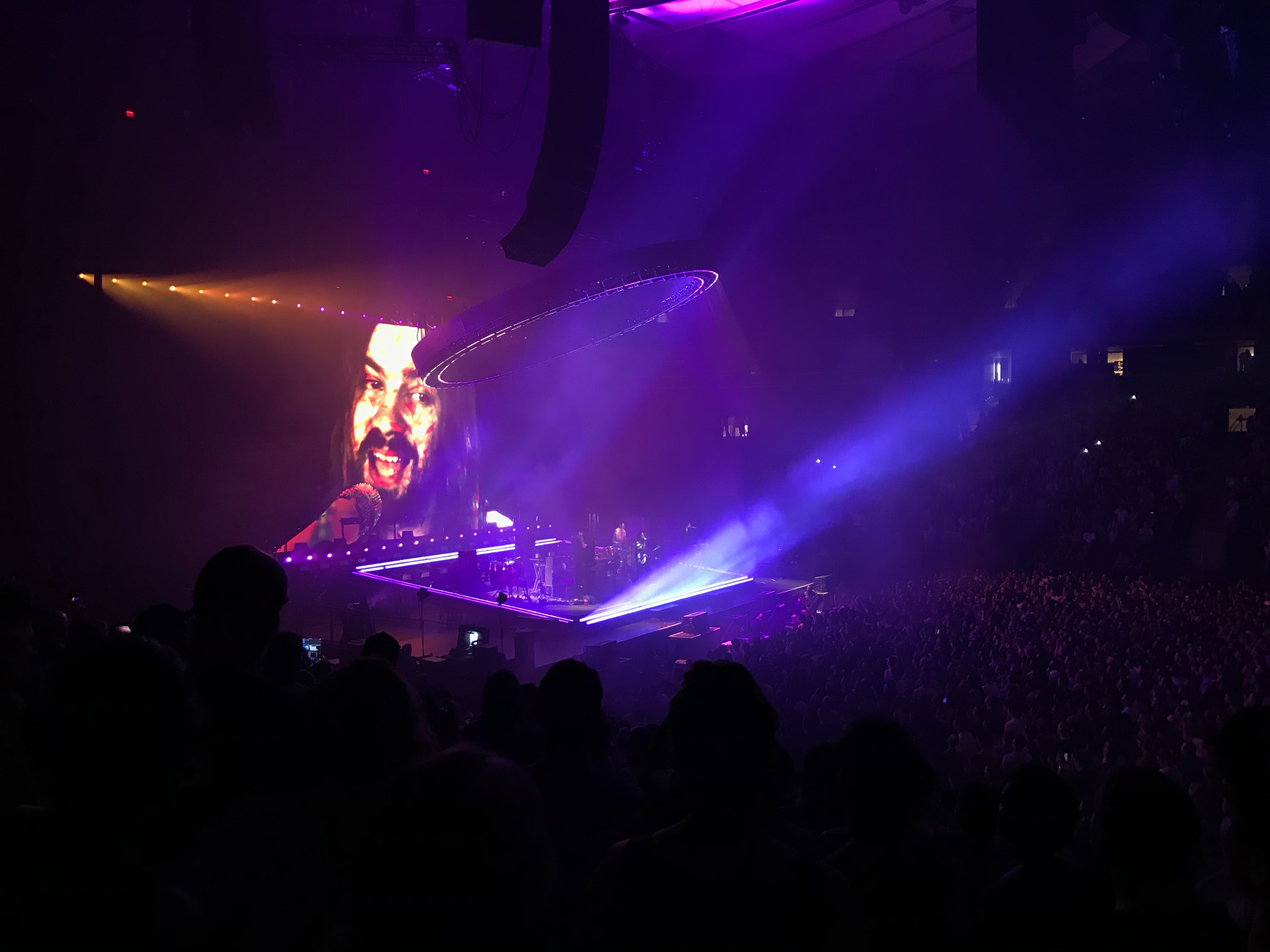 Two hours of psych rock later, we headed back to the hotel. Stoked and starving, we decided to look for a place to eat because, according to The Office’s Ryan Bailey Howard, “You can get a sandwich any time of night in New York.”

I didn’t think I’d need a jacket as the rain had stopped sometime during the concert and there’s no possible way it can start raining again… right? Seconds after we got out of the hotel it started bucketing down again and my t-shirt didn’t stand a chance. Luckily, we were standing right outside of a bar, and it was nearing 1 a.m.

Our haven’s name was Spoonfed, and I’d like to take a moment to give it my personal endorsement. I’d also like to take a moment to endorse the people of New York City. Vancouver gets a lot of flak for being a city that’s hard to make friends in, and the residents have a reputation for being closed off. In contrast, one word to describe New Yorkers comes to mind: unvarnished. It felt like everyone was too busy or pissed off to beat around the bush. They also had a sense of pride in their city, which probably stems from being the cultural and commercial hub of a continent for the last couple hundred years.

One of these straightforward New Yorkers was the bartender at Spoonfed — a Bronx man named Jason. Jason was spending the last of his shift chatting with a couple at the bar and, as soon as we sat down, he got to chatting with us as well. He invited us to his old workplace — a bar in a converted apartment building. We ended up staying until close to 3 a.m. The bar was in Hell’s Kitchen, a stone’s throw from Broadway, and apparently celebrities were not an uncommon sight. The rudest Jason ever served? Kunal Nayyar.

The next morning we managed to haul ourselves out of bed around 11 a.m. — probably the jet lag and not last night’s adventure, we told ourselves — and headed to a bagel shop Jason’s other patrons had recommended. Apparently that couple had recommended the shop, called Ess-a-Bagel, to several thousand other people because the line stretched far out the door. Our ‘jet lag’ demanded hot food now, so we cabbed over to H&H bagels on the Upper East Side. Sophie and I got a bagel each — one bacon, egg and cheese and one cream cheese — on toasted ‘everything’ bagels. New Yorkers debate the merits of toasting — many argue that it’s not traditional — but I can tell you as soon as we finished them, we got back in line for a few more. The bagels are another thing that New Yorkers are proud of, sometimes to a fault, but their reputation is well-earned. 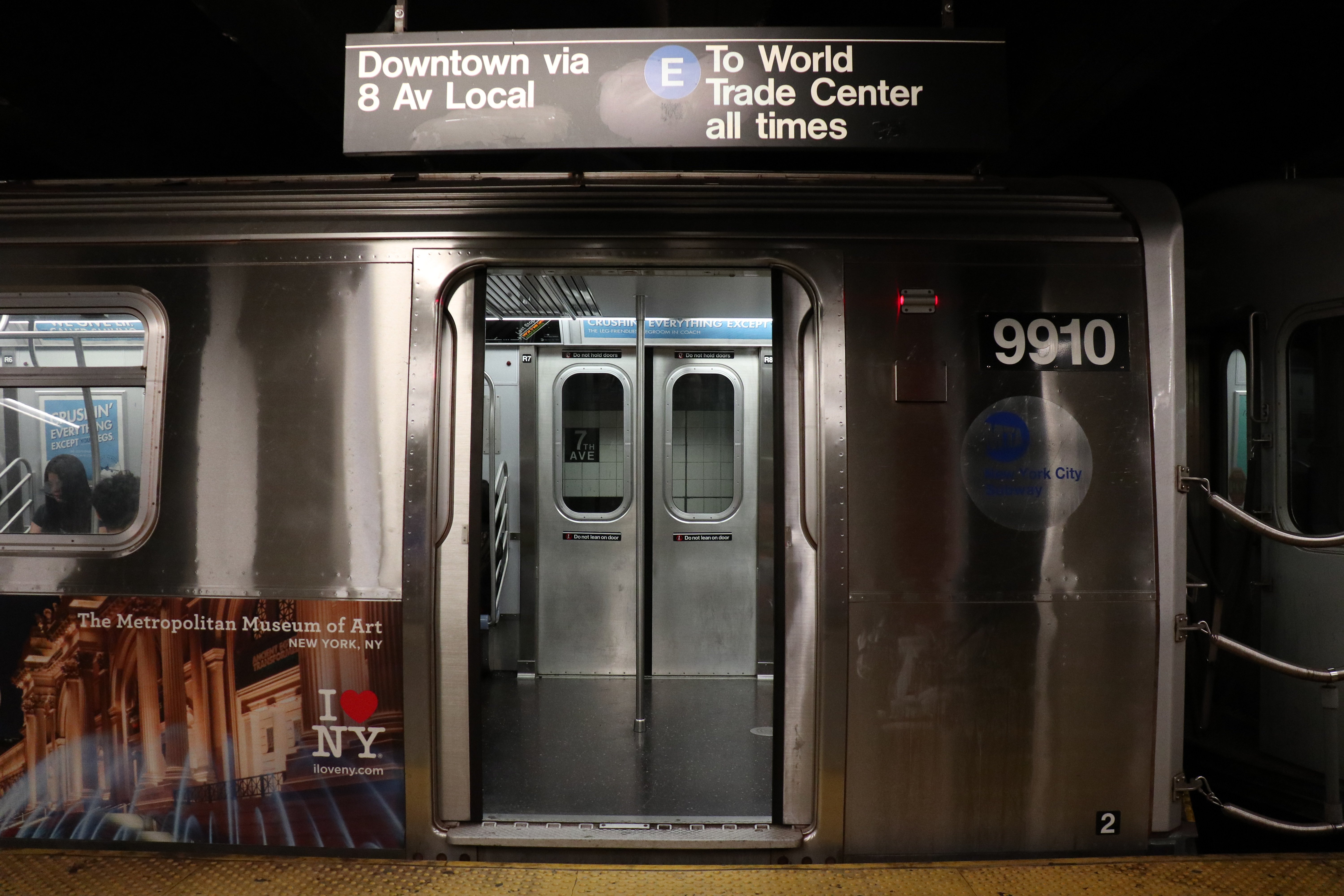 From there, we walked through a dozen Gossip Girl sets to the Metropolitan Museum of Art, a football field-sized maze of art and artifacts. There was a huge range of priceless items there, from a Frank Lloyd Wright house rebuilt indoors to a full-sized Egyptian temple rescued from flooding in the 70s. An exhibit of furniture from early America contained the most forbidden fruit of all — antique velvet couches. Would a nap be worth the lifetime ban?

With the next morning’s sunrise came our final day, and we only had a few hours ’til our flight so we decided to make the most of it with a trip to the High Line. Highly recommended by bartender Jason, the High Line is a prime example of urban renewal. Formerly some derelict railroad tracks, the High Line was converted in 2009 to a linear park, or “rail trail.” However, much like Ess-a-Bagel, it seems a few others shared our idea. Walking the High Line felt like queuing to see an amusement park you were already in. We escaped down some stairs and managed to sneak some shopping in before we headed to the airport.

Back at Newark, the experience wasn’t any more pleasant the second time around. The flight consisted of Sophie and I taking a hard look at our budget, trying to find the earliest possible time we could get ourselves to the Big Apple, again. There was so much left to see, left to do and, if this trip was any indication, left to eat.