Places to Go: Finding peace of mind under the constant blue of the Fujisawa skies 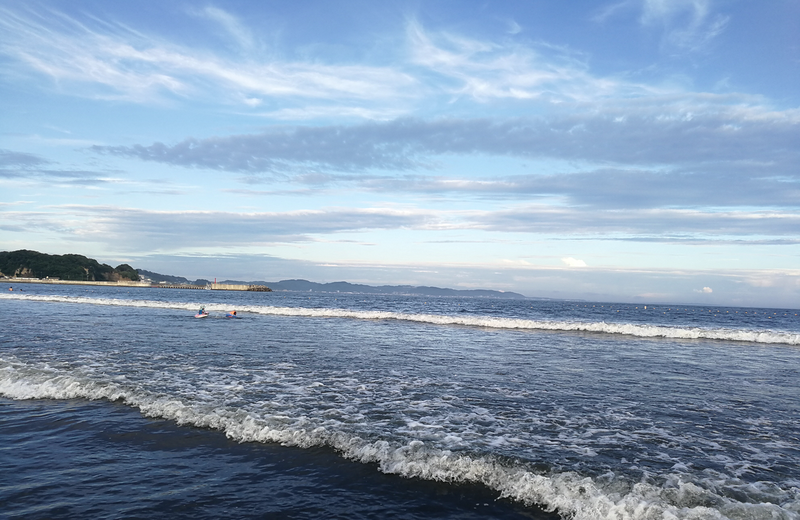 The salty breeze off the coast made the oppressive summer heat a bit more bearable. Amelia He

The day before our planned departure to Kyoto, western Japan braced itself for torrential rains, rising rivers, severe rain and flooding. We watched the news with wary eyes and scrambled to find an alternative route and homestay. My friend suggested Fujisawa, a small seaside town south of Tokyo. Considering my next-to-none understanding of Japanese geography and the fact I was unable to communicate with almost anyone except for my companion, I didn’t know what to expect.

We took the train from Tokyo and within two hours, we were greeted by a giant Kannon statue on the hill from the station. The town was a polarizing departure from commercialized Tokyo, where an absence of intense visual onslaught and inner-city sounds awaited us.

After we dropped our bags off in our Airbnb, we hopped on the Shonan Monorail, which is no ordinary monorail — it hangs suspended from the overhead rail as it makes its way toward the coast. The carriage cuts through city so closely below that you might expect it to brush the top of homes along the way.

We got off at Enoshima station and the city unraveled itself under the bleaching sun. I was surprised by the sheer volume of tourists crowding the station; the locals from Tokyo often head down to the beaches here for the weekend. We followed the flow of people and soon enough arrived at a long bridge that links Sagami Bay to Enoshima along the Shonan coast. The salty breeze off the coast made the oppressive summer heat a bit more bearable.

Enoshima Shrine, dedicated to the sea deity Benzaiten, was located at the end of the bridge. We arrived at its Torii gate, which marks the separation between the world of humans and that of the gods. Inside the gate, there was a bell in front of the haiden. I took hold of the rope with both hands and give it a firm shake, then prayed for peace of mind. 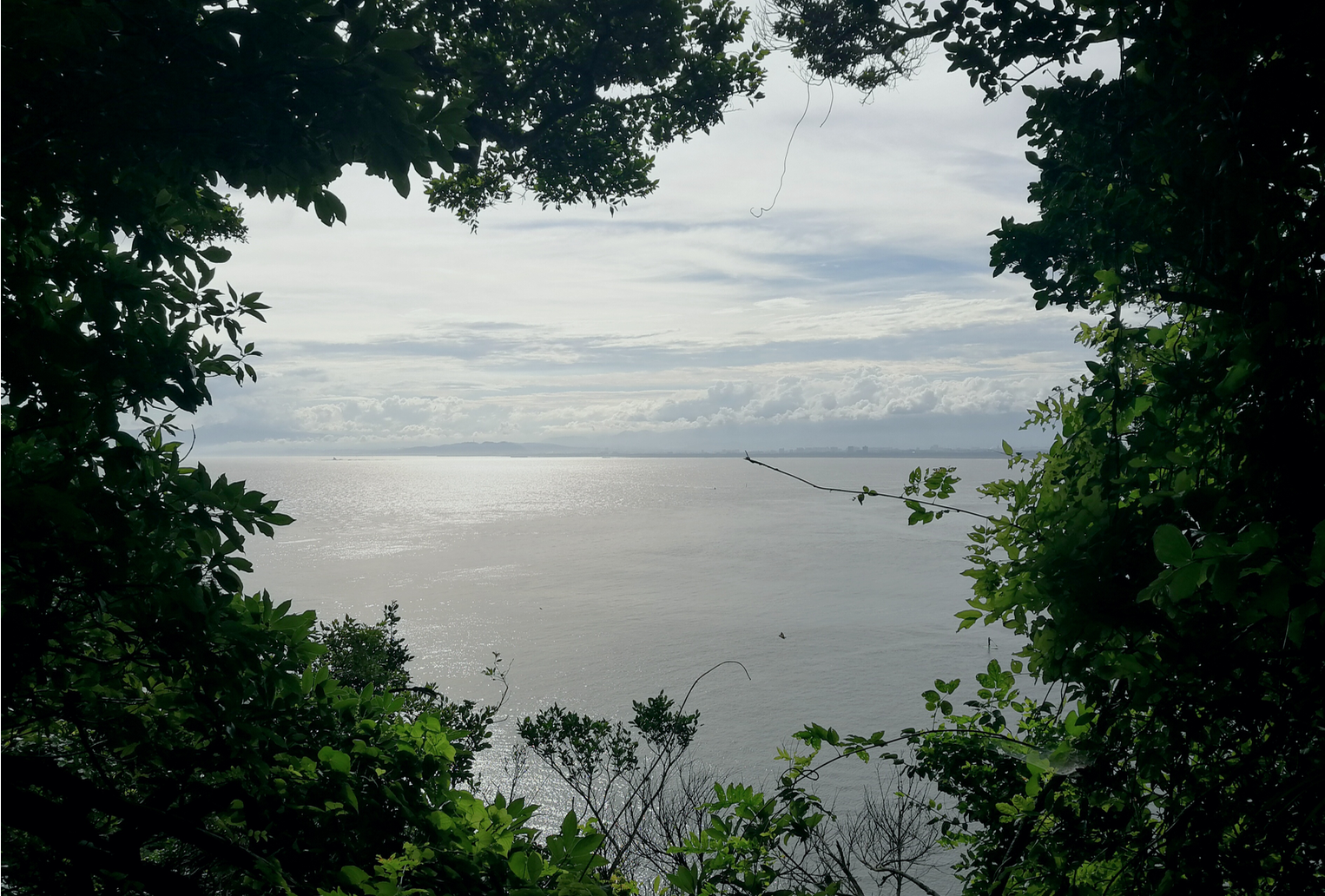 We stumbled on some rather breathtaking lookout points with crumbling cliff-tops and wooden terraces leaning out over the ocean. Amelia He

I need to clarify that I am not a religious person, but the previous semester was hard on me. I dreaded waking up to find email after email of incessant projects. I felt frivolous and sometimes like Sisyphus. I read Robert Pirsig’s Zen and the Art of Motorcycle Maintenance over the summer and had copied chunks of it into my journal. I tried to cultivate the peace of mind Pirsig had written about, which means “we do not separate ourselves from our surroundings,” while I aimlessly wandered the streets of Enoshima in search of some sort of spiritual enlightenment.

Three smaller shrines exist among the hilly pathways that wound through the mountain, where we also stumbled on some rather breathtaking lookout points with crumbling cliff-tops and wooden terraces leaning out over the ocean.

After the hike, I took a dip in the water along the Shonan coast to wash off the humidity from my skin. Shonan coast is a favourite coastal stretch among locals for its powdery sand, laid-back surf vibe and small eateries that line this section of the route. At its best, dusk at the coast can be the most glorious part of the day, with a light and tranquility that’s so hard to capture at any other time. We gazed at the ocean glistening in the afternoon sun, blissfully appreciating the coastline. 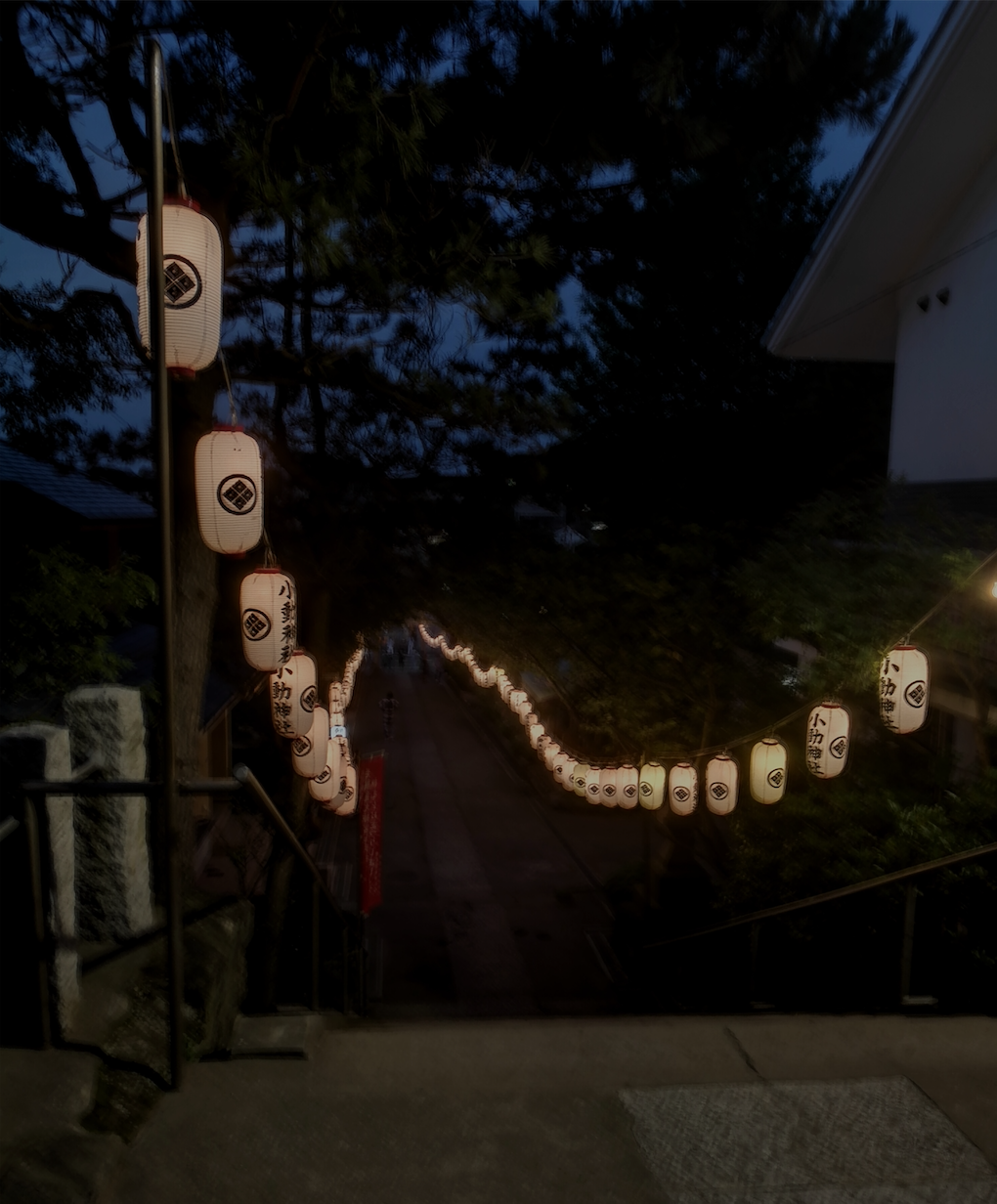 Summer festival reverberated through the streets. Amelia He

We took the Enoden back to Enoshima station, which is a local train that runs from Kamakura to Fujisawa, passing through each small neighbourhood. The train track rolls away from the sea and following the coastal road, before winds through the leafy suburbs.

The reverence for Japanese tradition is apparent in Fujisawa too, with not only the temples and shrines that are dotted throughout neighbourhood, but also celebration of summer festival. On our train ride back, my friend pointed to a group of men in yukata beating the drums and told me to take a look. My curiosity led me to the mass of people in clothes drenched in ocean water.

Summer festival reverberated through the streets. The locals all got together and carried their local shrine’s mikoshi, portable shrine, around the neighbourhood to an area designated by the festival. It is symbolic of carrying the deity of the shrine to the festival. It was quite a sight to see a big group of men shouting and chanting as they lifted the mikoshi around. The aroma of home-cooked fare permeated the air and the rest of neighbourhood took a stroll in the streets, wearing summer yukata, tasting local foods and scooping goldfish.

We walked along labyrinthine streets with crickets chirping in the trees and observed the town with a sense of wonderment. The sounds of the streets increased in volume as the night progressed, and I felt my voice blending in with the crowd. Somehow, beyond the lines of people shuffling toward the shrine to say their prayers, beyond the repeating drum beats and men wobbling their mikoshi down the street, beyond all the strange iconography of this religion that’s so foreign to me, I was no longer trapped in the isolation of my head and felt complete and at peace with myself and the world.

And where do I begin? I am a person who has been afflicted with perpetual anxiety, whose best moments are tarnished by the knowledge that they are transient, whose worries mean nothing and everything. But it was moment of forgetting that, forgetting cynicism, dread and tomorrow down the road. I reminisced about staring into a lush suburb from the monorail, or dipping in the water beneath the blue, blue, electric blue of Fujisawa sky, or watching the local men in yukata chanting through the street. I thought about these moments, moments of grace. Moments when the wall of you and your surrounding comes down and you feel nothing other than completely presence and peacefulness within you.

That night, my bed rattled as another monorail hovered above, and I was drifting in and out of sleep. It had ceased raining in Kyoto and we would head back the next morning