Places to Go: The future of drinking is a wine vending machine in London 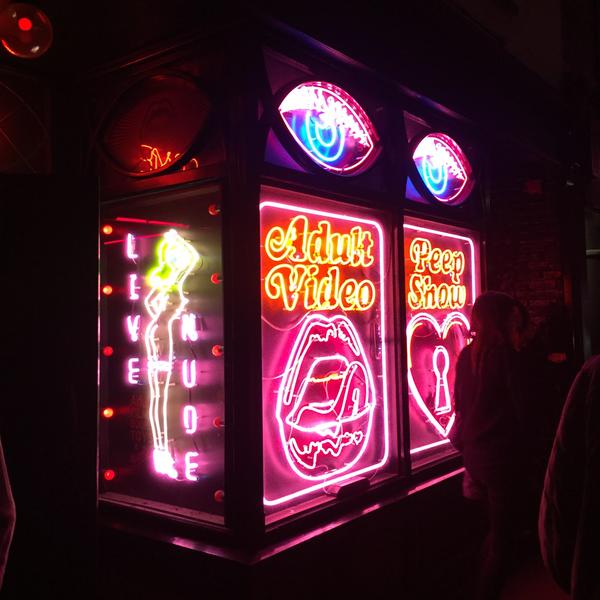 Being above the legal drinking age, this trip meant pints and a whole hell of a lot of British candy. Courtesy Jack Lamming

I’m on a flight to London, two weeks into the school year, to visit family — the Lamming family has got people in Canada, New Zealand and the U.K. Right now it’s just me and my parents here in the Lower Mainland. We used to have my sister Megan in the area, but she skipped town for London last year. Also in London lives Edna Chestney, my indomitable 98 year-old great-grandmother.

A week into classes, the stress was simply too much for me (20 pages about Gandhi’s early years?!), so I hopped on a red-eye to meet my parents, who had flown over the night before. I hadn’t been to London since I was a foot and a half shorter and 60 pounds lighter than I am now, when I was just an angsty 14 year-old. I bought my first album that trip, then got home and remembered iTunes.

I didn’t get to Heathrow until 2 p.m. on Saturday, and our return flight left Tuesday at 6 p.m., a total of 76 hours in London. When I was a kid and we would visit Nana Chestney, it always meant the Natural History Museum — the best and the worst — and a lot of British candy. Being above the legal drinking age, this trip meant pints and a whole hell of a lot of British candy (I would kill and die for Colin the Caterpillar).

We stayed at an AirBnB in Surbiton — or Suburbiton, as my sister’s girlfriend Daisy calls it — meaning our commute into central London hovered around 40 minutes, not accounting for train delays. Megan works at a restaurant called Clipstone in the ultra-luxe Fitzrovia, and we sat down for a similarly luxe meal. It was all barrel-aged negronis and wild grouse, so wild in fact that my dad bit down on a buckshot.

Three bottles of cheap wine later we hit the streets on the way to Soho, and I start to notice something about London: it sounds different. Every other group of people you pass is speaking a different language, almost none of them English. Where my sister works, there are girls from Germany, New Zealand and Canada (and one from Liverpool). Of the more than 300 languages spoken in London, I must have heard 250 at least.

We went to a wine bar called Vagabond, which is the future of drinking. At the counter you buy a card, which you then load up with money. Cabinets and coolers line the room, all loaded with wine bottles. You punch your card into the cooler, press a button over the bottle of wine you want and a glass of wine is dispensed out to you. Genius.

After the wine bar, we bounced around Soho for a few more drinks, and hopped the last train home. We were staying in a giant council building, built sometime post-war. This meant that the apartment was a concrete box, a Wi-fi no-go zone with almost no water pressure. These two did nothing for the one-two punch of hangover and jet lag the next day.

In the morning, we headed over to Nana Chestney’s place, to pick her up along with my grandma, Nana, and Nana Chestney’s boyfriend, John, for a pub lunch. Sunday afternoons in the suburbs are when everyone goes for pub lunches, and as a group of eight we were shit out of luck for anywhere but a Wetherspoons. If you’ve never been, Wetherspoons are a chain of pubs all across England, serving cold-ish beer and cold-ish food — think a Tim Hortons that serves beer.

At the Wetherspoons we had fish and chips, mushy peas and pints. My sister’s girlfriend Daisy explained that this was the kind of bar where the two of them were just friends, motioning over to a guy in a tracksuit playing snooker with a knife clearly hidden in his underwear (at least I hope it was a knife).

With my family being so spread out across the world, our history has always been a little hazy (my parents refuse even to tell me how they met) so the pub lunch was the perfect opportunity to learn a little bit more. I found out that my namesake, Jack Chestney, was one of the last to leave the beach at Dunkirk, and spent the rest of the war as a Desert Rat, a rear gunner in a British tank.

The next day was Nana Chestney’s big day — she was turning 98 — which obviously called for another pub lunch. We went to Alfriston, a town older than democracy itself, and ate in a pub even older than that. Driving through the countryside outside London, you start to feel like a pinball, except that the bumpers are roundabouts.

We only had one night left in London, and goddammit if we weren’t going to make the most of it, so we went to Brixton. After an hour on the train platform (due to “a vehicle striking a bridge”) and three Tube changes we finally made it to Brixton station. Then we remembered it was Monday. Everything was closed, save for a container market full of white people selling jerk chicken, dumplings and ramen.

We hopped another bus to Clapham Common, the neighbourhood my parents met in (I presume). After some shitty pizza (who in their right mind puts the toppings on after the pizza comes out of the oven) we found the pub they used to frequent.

Still jetlagged 12 hours before our flight home, and brutally sleep deprived, we could only manage one pint. The pub wasn’t the same anyway since it had been bought and renovated the month prior.

On the flight home, I had two Benadryls, three beers and a coffee — and nearly a heart attack. London felt a lot like home — probably because of the garbage everywhere.