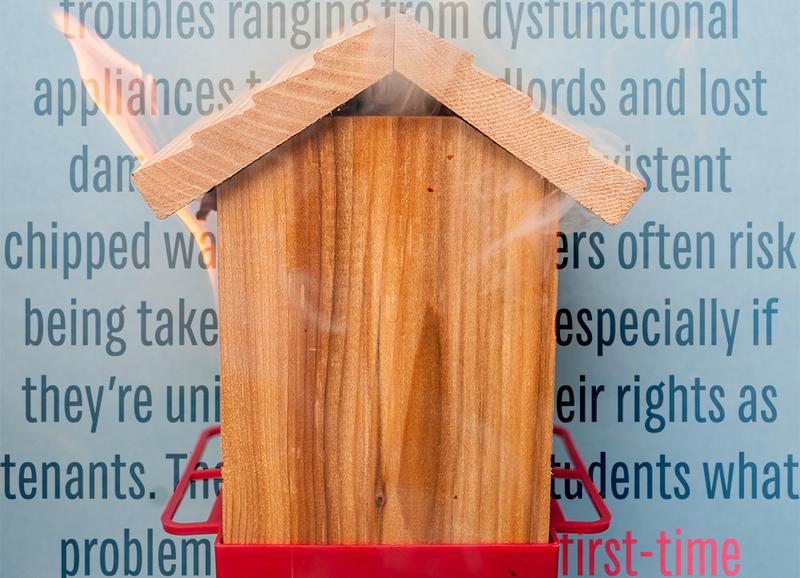 UBC is surrounded by one the most expensive and in-demand real estate markets in the country. This leaves many students scrambling to find affordable housing — often for the first time.

“Vancouver has the highest rent in the country. It’s natural that students are going to pay higher rents than anywhere else,” said Tom Durning, a senior advocate at the Tenant Resource and Advisory Centre (TRAC).

Facing troubles ranging from dysfunctional appliances to creepy landlords and lost damage deposits over non-existent chipped walls, first time renters often risk being taken advantage of — especially if they’re uninformed about their rights as tenants. The Ubyssey asked students what problems they’ve faced as first-time renters and what advice they could offer for the many students hunting for off-campus housing themselves.

Renting a property without a contract or a written agreement of any kind can be very risky. There is very little holding the landlord accountable and tenants can be subject to a landlord’s whims. But in an expensive market, the constraints imposed by a student’s budget lead many to take chances.

Third-year international relations student Shermaine Chua’s first rental experience was living in a five-bedroom “shed” with four roommates for $500 a month in a property on the University Endowment Lands.

In exchange for the cheap rent and the convenient accommodation, Chua forfeited the advantage of a contract.

“We never signed a contract because I think technically [the landlord] was having people live there illegally. That part of the endowment lands wasn’t supposed to be rented out,” said Chua. “We thought it was kind of weird — and obviously illegal and sketchy — but it was okay just because the rent was so cheap.”

For the most part, Chua said the experience was bearable and the problems felt small, but over time they added up.

At one point, Chua woke up to her landlord walking through her room and into the main rented area. Her requests often bordered on ludicrous — she told Chua and her roommates not to have friends over, cut down their laundry and even refrain from using the washroom too much.

“It was really weird. For example, my roommate has a boyfriend and he would come to stay over. Instead of telling [my roommate] directly, [the landlord would] tell us to tell her to not have him over, but she’d be really weird about it. She’d be like, ‘Be careful of him! He is an evil spirit!’”

“We thought it was kind of weird — and obviously illegal and sketchy — but it was okay just because the rent was so cheap.”

Although Chua said would not want to repeat the experience, she does not believe that all students will stop renting without contracts — choosing to compromise rather than go over budget. Nonetheless, she hopes students will push to have written agreements.

“It does make things easier if you can say, ‘Hey! You promised me that on this date this would happen or you said that these conditions would be upheld.’ So you have a bit more weight behind your argument,” said Chua.

However, finding an affordable location with a landlord who offers a contract does not solve all problems student tenants tend to face. In order to live safely, they must know their rights thoroughly and learn to fight back.

Chris von Schellwitz learned this the hard way when he was in the last year of his master's degree in physiotherapy and renting a house for the first time along with three of his friends. The house was in a decaying state when they moved in, but von Schellwitz and his friends would soon find the dirt to be the least of their problems. The stove, oven, washer and dryer all broke down — it took a couple weeks to get each appliance fixed. In February, half the house lost power. When the landlords called in the electrician, he told them that they need to replace the whole system because it was too old. The landlords refused.

“They just said to do a patch job because they didn’t want to pay for it — it was too expensive,” said von Schellwitz.

It took one month for the “patch job” to be completed. When von Schellwitz and his roommates saw the results, they knew it was time to leave.

“They ended up running extension cords and re-wiring everything from the outside of the house through our windows in order to get power,” said von Schellwitz.

Each of these issues was compounded by the difficulties von Schellwitz and his roommates had getting the landlord to listen to them. He said he learnt that for a renter, persistence with landlords is key.

“You have to take [the issue] to them often because they will ignore you the first time. I became quite threatening after a while, always threatening them with the tenancy board because otherwise nothing would get done,” said von Schellwitz.

He warns other students and first time renters to know their rights and not to take abuse.

“Everyone knows that they have rights, [but] people rarely know what those rights are,” said von Schellwitz. “Don’t let landlords walk all over you and try and tell you what’s right. Make sure you educate yourself.”

Third-year food, nutrition and health major Evonne Tran agrees. She had to become fluent in BC tenancy law to fight her own residential tenancy case and knows first-hand that being ignorant about your rights when you are in a position of weakness can open students up to abuse.

Albert Reymann, a fourth-year international student majoring in philosophy, provides an example. After losing the residence lottery in his second year, Reymann and nine of his friends decided to rent out a 10-bedroom basement suite on West 4th Avenue and Blanca.

“We were almost all international students, none of us ever having any experience with tenancy or renting or anything in BC,” said Reymann. “It was getting late in the year [and] we hadn't worried about it too much. We didn't realize how bad the housing market here was, so we were pressed to find a place to live.”

The rental worked out fine until the end of summer after Reymann had sublet his room and gone home to Germany. It was August when Reymann got an email from one of his roommates who was still in Vancouver asking him to pay an extra $100 on the previous month’s rent that the landlord was demanding because of the “damages they feared the sublets might have caused.” When Reymann refused to pay the illegal fee, the landlord would not return any of the $3750 security deposit. Reymann and his friends decided it was time to enter the litigation process.

“Don’t let landlords walk all over you and try and tell you what’s right. Make sure you educate yourself.”

While going over their case, Reymann found out that the lease contract he and his roommates had signed was full of clauses that were illegal under the BC Tenancy Act such as dictating if, when and for how long Reymann and his fellow tenants could have guests over. Landlords are not allowed to place such restrictions.

“Students, especially international students and students from other provinces, have no idea what they're getting into when it comes to living here. It's very expensive and oftentimes the competition is so high, the quality of living is abysmal and they don't have to do anything about it because they'll fill it anyway because there's so much demand for it,” said Reymann.

One campus resource which provides legal assistance to students with residential tenancy issues such as Reymann’s is the Student Legal Fund Society (SLFS). Their president, Jude Crasta, said that he has found affordability, availability and rent control to be the major issues faced by students renting off-campus.

“I've definitely seen cases of many of my student friends who, after certain periods of time when after their leases are up, they can't afford to renew their leases. So they search for other places that are cheaper even, if their financial situation remains the same,” said Crasta.

As for availability, he feels students face two unique issues. For one, many students prefer an eight-month lease so that they can go home for summer. This is not easy to find as many landlords prefer the convenience of a year-long lease. Crasta said many landlords are also very reluctant to rent out to students, decreasing an already-small market.

“There is the market perception that students are bad for property damage, they can't maintain the security of the property, they can't pay the rent on time. That can lead to many students being rejected from access to tenancy options,” said Crasta.

However, Crasta felt that the the perception that students can be damaging to property might have some basis.

“Although it is not fair to single out students completely, we can do our part to defeat that perception and make sure that people are being given all the options that they need in order to live, work and thrive in this area,” said Crasta.

Crasta also cautioned students to be aware of their rights, pointing to online and AMS resources such as the SLFS.

“Plus, they have the law students over at UBC if they ever need any help with tenancy issues,” he added, referring to the Law Students’ Legal Advice Program — run out of UBC’s Allard School of Law — which sets law students up with low-income earners for free legal advice and representation.

The only thing he cautioned students to be aware of is the transparency of the agreement they are entering.

“Just make sure you rent it from the owner or an authorized rep of the owner,” he emphasized. “If you think it’s too good to be true, it’s a lot cheaper than anything else around and the agents or the landlord seems shady, ask for identification and don’t get scammed.”