Summed Up: It's a long road to gender equity in UBC's faculty 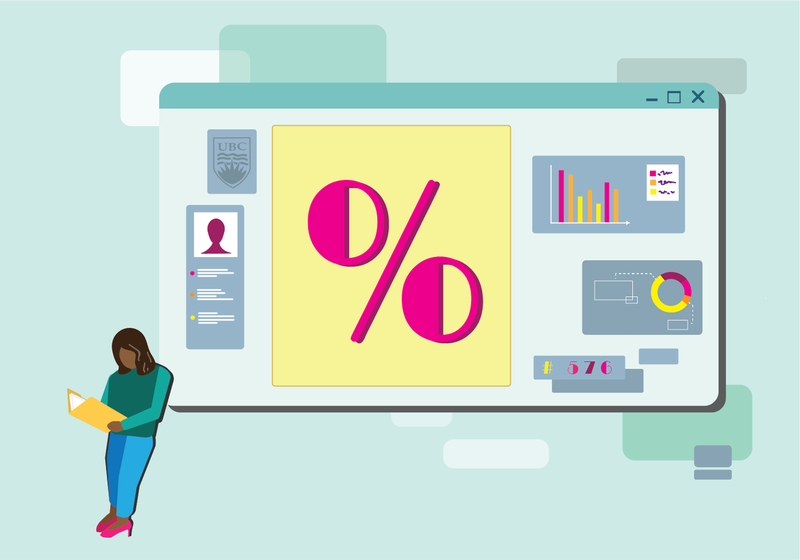 We took a dive into the deep end of UBC’s slow but steady march towards gender equity to see why exactly the university is getting caught in the weeds at its most senior levels of academia. Kristine Ho

The posts come each year, every year. Your friends share them in a flood on social media, they’re the Daily Hive articles you actually read and administrators quote them at every university event you attend.

Detailing UBC’s climb in the Times Higher Education rankings, its recognition as the top university on climate action and its initiatives to collaborate with and empower Indigenous communities, these articles paint a picture of an idyllic, forward-thinking university atop a forested hill.

But underneath the posts, the numbers tell a different story — one of an institution struggling to build gender equity among its faculty and administrative leadership. In 2018, just 26 per cent of its full professors were women — compared to the national average of 28 per cent — and only 4 of its 12 faculties had women deans.

The imbalance is nothing new to UBC. Since 2006, the number of full-time tenure-track women faculty has risen less than 5 per cent to just under 35 per cent in 2018.

Of course, there are small increases towards employment equity: an average of about one per cent more UBC staff members are women each year. The university also has dedicated faculty and administrators working hard on these issues.

Now, with updated data from over a decade, The Ubyssey took a dive into the deep end of UBC’s slow but steady march towards gender equity to see why exactly the university is getting caught in the weeds at its most senior levels of academia.

For a woman studying engineering, business, forestry, science or land and food systems, there is only a 21 per cent chance at most that any of her full professors will be women. A few hundred metres down Main Mall, that chance increases to 51 per cent in the faculty of education and 32 per cent in arts.

This is a problem because whether students at UBC — over half of whom are women —feel sufficiently represented has a big impact on their academic success.

“One of the things that we heard loud and clear from the students was if they could see themselves either in the classroom or in the curriculum, that really was key to their inclusion within their their coursework,” said Dr. Sara-Jane Finlay, Associate VP Equity & Inclusion, in a March interview with The Ubyssey.

But there’s a contrast within UBC’s professorship levels that paints a fuller picture. Representation of women is significantly better in the assistant and associate professor ranks, at 48 and 43 per cent, respectively.

The same goes for women in sessional lecturing and contract teaching positions, which are much more precarious. Women have slightly outnumbered men almost every year since 2006.

“The number of women full professors is increasing over time, but there’s no way to get too close to 50 per cent in the near future — it’s usually a 0.4 per cent increase per year,” said Dr. Jennifer Love, senior advisor to the provost on women faculty. “So some people are moving through the ranks, but it’s very slow.”

UBC is focusing its efforts on recruiting more women in junior ranks and building better pathways for them to the tenure track. Unconscious bias training in hiring committees, reforming human resources practices that disadvantage women and chipping away at the culture that sees male-dominated faculties as normal are all part of the university’s efforts to promote equity.

“One of the biggest impediments that Western institutions are facing is a normalization of what the status quo looked like in 1920,” said Love, whose role was created in 2016. “Universities are obviously very different now from where they were centuries ago … but that hasn’t translated into a change in faculty.”

That’s why an inclusion action plan, Finlay hopes, will help take the university beyond diversity.

“I think we’re more comfortable talking about diversity,” said Finlay, noting that diversity is about the presence of many different people in an institution. “But when we talk about inclusion, we’re actually talking about changing the culture of the institution.

If good data is the currency of change, UBC doesn’t have much in the bank beyond the gender binary. There is no fulsome data on how many trans, non-binary and gender non-conforming people work or teach at UBC because it must be self-reported. What has been self-reported to Equity & Inclusion is not yet public.

The numbers of Indigenous and racialized faculty, faculty with disabilities and diverse sexual orientations and gender identities is collected through the Employment Equity survey, where faculty can self-identify in any of these categories. The only reason that such detailed data exists of the proportion of women and men who teach at UBC is the necessary signification of sex when an employee is hired and insured.

“We’re working on moving beyond that,” said Love of the gender binary, noting that there are important data and personal privacy concerns that have to be considered when doing so.
In addition to looking at how self-reporting can be done without infringing on a faculty member’s privacy, Love and Finlay are working with Dr. Minelle Mahtani, senior advisor to the provost on racialized faculty, to find the points and importance of intersecting sexualities and gender and race identities.

One option, although Love said it hasn’t been pursued yet, could be to seek exemptions from the BC Human Rights Tribunal to make “targeted hires” of under-represented groups.
“We’re not good at hiring people who are different from ourselves,” said Love. “Conscious and unconscious biases really prevent people from making change.”

Both Finlay and Love know that simply hiring women and marginalized individuals is not going to solve the problem. The gender gap between junior and senior academic positions is a product of decades of bias operating at UBC and in academia as a whole that won’t be undone in a single term.

Some Canadian schools have taken more deliberate action. Recently, the Universities of Alberta, Toronto and Guelph increased salaries for female professors to address pay inequity between women and men faculty. Love sees this as necessary — once she’s crunched the numbers — for UBC as well.

“You have to shake things up in order to get that diversity and you have to support people [who] are there in those positions,” said Love. “You cannot keep the status quo [because] that sets you up for a very monolithic identity.

“And it doesn’t work in the twenty-first century.”