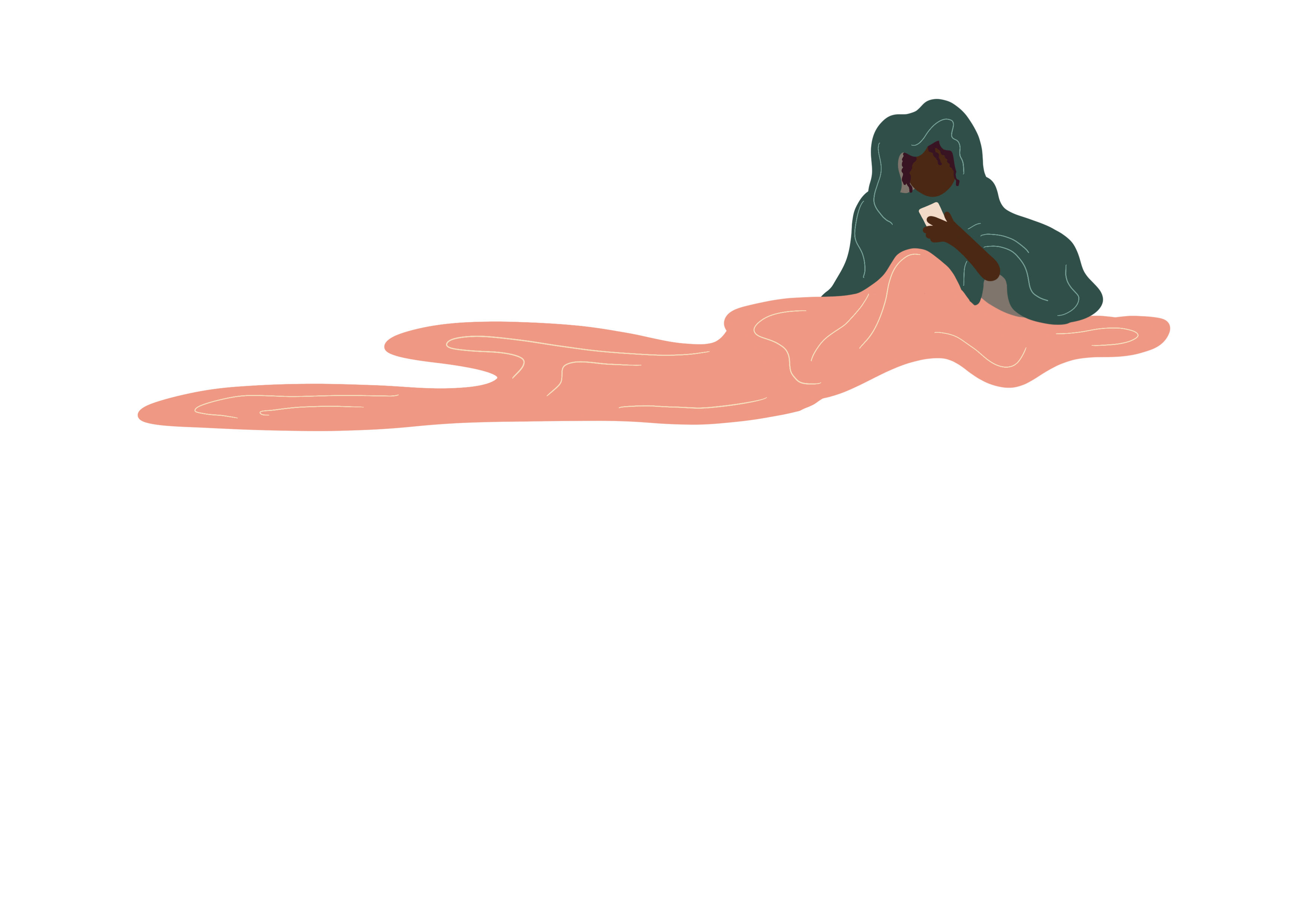 The Art Of Doing Nothing

I became keenly aware that the act of doing absolutely nothing is contrary to everything that I have been taught as a Black woman.

May 26th: I lay in the fetal position facing away from my window, swaddled in my blanket and scrolling in horror as I watched various accounts unfold, documenting the death of George Floyd. The summer had already ruthlessly attacked Black bodies, our lives and lungs brutally attacked by a virus that was disproportionately killing us.

Not only were our lungs incapacitated in hospital beds, but even on the streets, we couldn’t breathe. The autopsy may have declared his death a result of asphyxiation, but it was clear that his life was taken because he dared to have Black skin. And while we mourned for him, we learnt of others ­— Ahmaud Arbery, Regis Korchinski-Paquet, Breonna Taylor, Oluwatoyin Salau. These were people who lived and died, their lives were more than a slogan, a t-shirt or an Instagram story.

Before the day I learned of his death, my default reaction would have been an exhaustive but temporary outburst of rage. In these instances, I found no time to grieve and sit with the fact that even in the 21st century, Black lives are still under a constant threat of being lynched. But as I curled up under my covers, anger didn’t feel like an appropriate enough reaction. It felt pointless.

As I scrolled through my timeline I waited for the rage to come, but it didn’t. The feeling that came over me was much darker. It was like sitting in the bottom of a vast, dark pit, an emptiness that weighed down on my whole body, rendering my limbs heavy and my senses numb.

For 72 hours, I embraced the art of doing nothing. Clicking through well-intentioned infographics and violent clips of Black suffering on Instagram, I wondered about how it would feel to not recognize yourself in the images and videos of Black brutality. To sit and watch George Floyd die, to watch his cries and pleas for his mother was more than a viral moment.

It was a warning, a reminder, that on the wrong day it could be our fathers, our brothers or even ourselves whose lives were cruelly and violently snatched for nothing more than a result of our Blackness. No amount of black squares could reassure me of my safety and still, I allowed the anger and outrage of others to wash over me, wrapping me up in a weighted blanket of reassurance that only further emboldened my inaction.

As I nestled further into my cocoon, I became keenly aware that the act of doing absolutely nothing is contrary to everything that I have been taught as a Black woman. For as long as stereotypes of Black people have existed, the act of doing nothing or being lazy has been deemed completely unacceptable.

This is a sentiment that has stemmed back to the Transatlantic Slave Trade, in which white slave owners justified the enslavement and degradation of Black bodies by arguing that Black people possessed the inability to run their own lives. By emphasizing negative traits within Black people, particularly characteristics of submissiveness, dishonesty and laziness, slave owners rationalized the commodification and brutalization of the Black body. Though this sentiment has metamorphosed through generations, this point of view has been deeply embedded in institutions and their policies. It has guided governments to over police and surveil their Black people especially when they appear to be doing nothing.

Black women are expected to be superheroes.

Black women have particularly been forced to navigate negative preconceptions. On top of fighting racism, they are also forced to navigate sexism and often as a result of both, classism. To be accepted, Black women are often expected to be superheroes ­— unfeeling, agreeable, background figures who work behind the scenes of movements without asking or expecting recognition for their hard work. Black women are expected to protect the world from their own wrongdoings, to stand behind white women in their fight for gender equity and stand behind men in the struggle for racial equity. During the civil rights era, Black women were expected to choose a cause to fight for, whilst being negatively and in some cases more harshly affected by both. Decades later, Black women still find their needs and desires overlooked by both movements, their work remains uncited, their voices talked over.

For every Martin Luther King Jr. , there is an Ella Baker, a Fannie Lou Hamer, a Coretta Scott King. For every Malcolm X, there are countless Black women who were and are vital in making the world a better place. Yet there are no days to commemorate their work, their speeches remain unquoted, their legacies continue to be unrecognized.

Black girls are conditioned to expect mistreatment in every aspect of their lives.

When I was six I innocently made the mistake of saying “what” in response to a question instead of “pardon;” my teacher responded in a fit of rage, her face reddening as she screamed insults at me until I burst into tears. She sent me to the back of the classroom to sit in isolation for the rest of the day. No other students were allowed to talk to me so I could think about what I had done. As I sat at the table, alone, I made the conscious decision to do everything in my power to not allow history to repeat itself. Sixteen years later I don’t forget to use the word pardon.

Even so, innocence is not something that is afforded to Black girls. A study from Georgetown University conducted in 2014 found that Black girls as young as five are viewed by adults as inherently “less innocent” and “childlike” than their white counterparts, resulting in the belief that Black girls are less deserving of protection and a nurturing environment. This has resulted in harsher punishments and higher suspension and expulsion rates for Black girls in the classroom.

As I got older, the treatment that I received from the adults in my life only worsened. Adults who were entrusted with caring for my well-being were actively responsible for endangering it. While non-Black students were allowed the benefit of the doubt, Black students were met with distrust and suspicion; our errors were treated as intentional acts of sedition.

I endured weekly music lessons with a man who took it upon himself to verbally castigate me every time I played a wrong note. I would sit defencelessly as he would berate me mercilessly, week in, week out, about how every mistake I made was actually rooted in my intrinsic laziness. Some weeks he would lecture about my shortcomings for several minutes, other times he would raise his voice into an almost shout before blaming me for making him lose his temper. His other non-Black students never received the same kind of treatment. While their errors were treated as simple mistakes, I was expected to present perfection and rebuked for anything less than. I have been followed, surveilled, policed and unfairly criticized more times than I would like to recount.

But what makes it much worse is the fact that I know that my experience is far from singular. Black girls know that the world will not fight for them, the same way they know that they are expected to fight for others. And so we armour ourselves, on guard and ready for the next unfounded attack.

In the last few years, I have worked to pursue a path to absolute perfection, filling my days with endless tasks, pushing myself to the brink of breaking point, masking insecurities with a veneer of resilience, replacing genuine feelings of anger with action. But as I lay undisturbed for those 72 hours, I saw another path.

Our pain, our anger and our joy, it matters.

I embraced a future that wouldn’t expect me to be on the frontlines of every battle, a path that allowed me every once in a while to sit on the sidelines and take a fucking break. In its own way, choosing to sit out can and should be allowed to be its own form of radical resistance. Prioritizing our mental health is just as important in the preservation of our lives as marching and organizing. Our lives matter even when we make mistakes. Our pain, our anger and our joy, it matters.

Eventually, I got out of bed. I hopped in the shower and put on fresh clothes. I had the energy to open my emails and read my messages. And days later, when I was ready to join the fight, I allowed myself to get off the sidelines. But my actions didn’t come from the same place of anxiety, nor was it coupled with my self-worth. I surrounded myself with other Black folks, we allowed ourselves to be angry, to make mistakes and despite the horrors that were occurring within our community and despite all the darkness, we even let ourselves laugh. And a few nights later when I climbed into bed, I felt the darkness, the numbness and the weight of my existence lift slightly from my body.