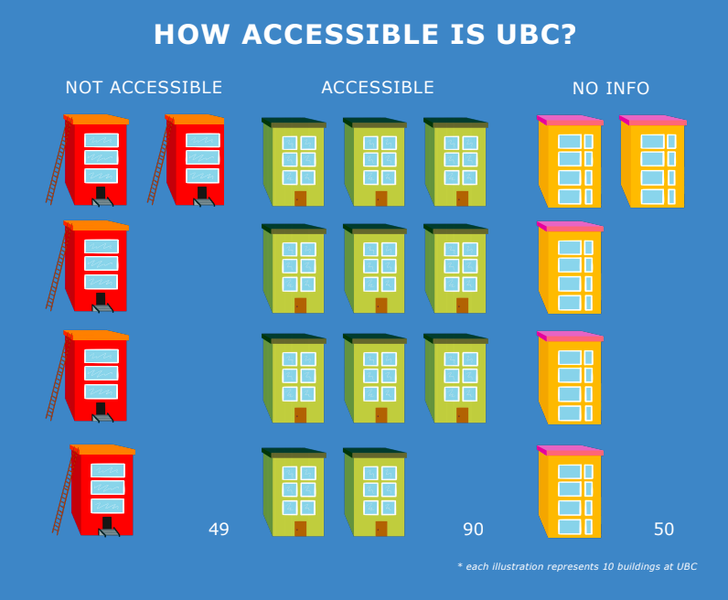 “The building is just a Frankenstein nightmare” Lua Presidio

Oliver McDonald, a second-year chemistry major, remembers walking towards HEBB for class. When he finally meandered away from the crowds of people with backpacks and books in tow, he made his way around the side to an empty back door. The standalone back entrance is the only accessible option to get into HEBB.

But when he got there, he found a locked door. Other times it was construction blocking the small ramp, workers glaring when he asked for space. Rarely do the accessibility buttons work, leaving him struggling to open the door and pull his walker through.

“I'm just trying my best to be a good student while having a disability, which is really hard when you're trying to do both of those things at once. It's hard not to feel hopeless.”

“Not only are you given basically no resources to help overcome those or help even get you through the door into the class, but that the other people just don't care,” said McDonald.

The ever-present heaviness of Chronic Fatigue Syndrome was in full force when he made it to Buchanan. While the building has four elevators, these elevators all service different areas, meaning if one is out the entire wing becomes inaccessible.

The elevator was broken, again.

McDonald decided to put himself at risk and slowly make his way up the stairs. He took his backpack out from his walker and waited to ask someone for help lifting his relatively light walker and backpack up the stairs.

“No, I am going to be late,” said the other student walking away. 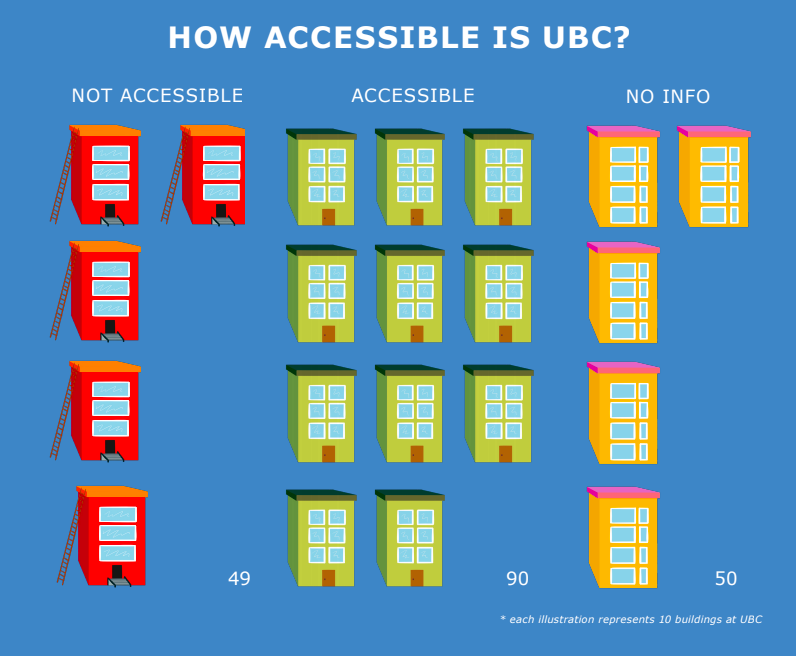 “The building is just a Frankenstein nightmare” Lua Presidio

There is not a day that goes by that McDonald does not experience accessibility issues at UBC. In large part, this is due to the physical makeup of campus. According to UBC’s Wayfinding program, 49 buildings out of the 189 on campus are inaccessible. Of the 140 remaining, 50 have no information on accessibility.

In addition to HEBB which houses the physics department, there are entire faculties that are inaccessible. The chemistry, anthropology and sociology, math and geography buildings are all inaccessible.

Many of the inaccessible buildings have accessibility features, such as a one-off ramp or elevator but many have entire wings or floors that are only accessible by stairs.

There is also no accessibility information on buildings residing on campus that are not owned by the university. This includes the Nest, the Wesbrook community centre and some residence buildings.

Centre for Accessibility Director Janet Mee claims the lack of information is not a gap in data on the built environment, but instead the result of uncoordinated efforts. She claims there are no overarching systems to house accessibility information on residence, faculties and other buildings. Instead, it is scattered in different databases which utilize differing terms.

According to Mee, the Geospatial Data Governance Steering Committee is spearheading efforts to have better data that will be consolidated into a new campus mapping system, but Mee was unable to provide a timeline of when the project would be completed.

But having accessible information does not help McDonald navigate campus. Even the Centre for Accessibility itself is not overly accessible.

The centre, located in Brock Hall, houses a special area for exam proctoring to ensure accommodations such as a distraction-reduced environment, extra time or a scribe are accessible to students. The exam rooms are split up over the ground floor and in the basement through meandering hallways.

“The building is just a Frankenstein nightmare,” said McDonald.

McDonald added that there are “tiny sets of stairs everywhere,” making it all the more difficult for him to simply travel to and from exams. He said that the only option to avoid the stairs is to take a platform lift over the stairs — but often nobody knows where the key is.

“They ask ‘Can you walk up the stairs?’ or they have to go and spend 20 minutes finding whoever has the keys so I can load on to the [elevator] just to get to the place where it's supposed to be accessible,” he said.

Mee told The Ubyssey she is fully aware of the current accessibility concerns. According to Mee, the exam centre was slated to be moved into Ponderosa C this fall. She said there is also a four-year plan that has also been delayed as a result of the pandemic to move both the exam and Centre for Accessibility into Ponderosa Commons.

“The building has a new ramp at the front door, the ground floor is completely wheelchair accessible and has both groups and individual rooms. There is a second floor for people who can use stairs [and] that has additional rooms, so all of the exams, [and] now all of the midterms too, will be happening in that space,” said Mee.

But for McDonald, the segregation of spaces as a result of stairs is the same issue as the centre’s current location. In addition, according to Wayfinding, any building that has floors only accessible by stairs are considered inaccessible.

At the time of publication, Wayfinding currently lists Ponderosa A, B, C, D, E and F as inaccessible. 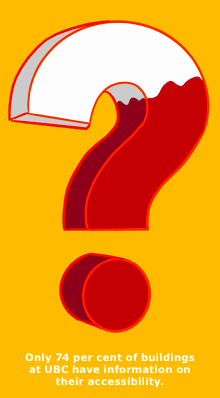 "it's just unreasonable to have a classroom [with] buttons [that] don’t work, the doors locked, the elevators broken.” Lua Presidio

For Deepi Leihl, the Accessibility Collective Coordinator for CiTR, things are getting better. Leihl has Metatropic Dysplasia, a rare form of dwarfism. As a result, she is an electric wheelchair user.

When she started as a volunteer eight years ago, she did not have independence. There was only one elevator in the old Student Union Building that she said barely worked. She often had to call maintenance to use the service elevator to get to and from her job.

“They didn’t even know where the elevator was or how to get there. They were so confused.”

This often left her waiting an estimated 10 to 20 minutes for assistance. If it was a lunch hour, she had to wait it out until they were back on the clock in the middle of her workday.

The move to the Nest bought Leihl some autonomy, but she is still excluded from much of campus. She is fascinated with architecture. But instead of roaming the halls taking in the sights of historic buildings, she is left daydreaming from the outside.

“What does it look like? What are the rooms? What do people even do in there?,” she asked.

“UBC says it is for everyone, but it is not if I can’t get in the building,” she said.

The foundation rates each building off of a rubric that was designed by disabled people with hearing, vision or mobility impairments alongside architects and designers. Each building must check off 60 per cent of the requirements to pass or 80 per cent to achieve gold status.

McDonald and Leihl were both clear that the Nest is by far the most accessible building on campus. Not only does it have buttons at every door, multiple elevators and ramps, these features are not hidden at the back of an alley away from all their peers' main entrance. It is integrated into the main flow of foot traffic.

While universities like Dalhousie University, the University of the Fraser Valley and Vancouver Community College are all listed publicly as being certified, UBC’s audit is not publicly available.

According to Mee, 10 buildings across UBC’s Vancouver campus have been audited. Newer buildings such as the Nest and Ponderosa Commons were audited alongside the long-standing ones. The math building was not rated as there is no elevator in the building.

“We used a wide variety of buildings and had a variety of outcomes,” said Mee.

For Scout Wasdell, physical accessibility goes beyond getting through the front door.

They are Deaf and rely on a wide range of technology to help them be able to hear their lectures. They still miss words, writing down the blanks in their notes to check after class, but it is when the class breaks into small groups for project work or discussions that leaves them isolated.

“I am supposed to have my own private room so that it is not just a room of chatter, but the profs always forget and scramble to find a room for me, but that takes time,” said Wasdell.

They said small group time often lasts no more than 20 minutes and when finding a room for them to meet with their group takes the majority of that time, their time was wasted.

For McDonald, he is shocked he has not failed a class due to accessibility issues.

“There is not a week that goes by where I [do not] ask myself:

As a chemistry student, McDonald has to take many laboratory courses. He said none of the labs he has seen has been accessible. Oftentimes, his walker did not fit in the rows and when it did, it was often removed.

“Bringing my walker into the chemistry labs, everyone treated it as an obstacle,” said McDonald. “There were actually some instances where I had put my walker somewhere as I was reaching to get something, [then] someone would push it out of the way so that he could get in and grab something.”

In some classes, he requested a chair which resulted in no real improvement. Students would take or move the chair, just as he had with the walker, or push in front of them during demonstrations, leaving them unable to see.

“If all of the lights suddenly went off, people would go, ‘Oh the lights are off, I guess we can't have class here,’” McDonald said. “They would either cancel it or move it somewhere else.

“They honestly should do that if it's not accessible, because it's just unreasonable to have a classroom [with] buttons [that] don’t work, the doors locked, the elevators broken.”

According to Mee, the centre will try their best to move classes if necessary. If an accessibility issue suddenly arises, such as broken buttons or elevators, they will work to get it fixed as soon as possible.

But McDonald has not seen the swift effort that was previously promised. The ability to leave after COVID-19 cancelled in-person classes acted as a much-needed escape hatch. He moved out of his residence after his first month because the accessibility button was broken the entire time.

“Every time that I went to that building the disability button did not work,” said McDonald. “I phoned multiple times, I tried talking to people multiple times, and every time they told me ‘Oh man, that sucks. We will try to get it fixed.’ And then it would never get fixed.”

The toll of spending the little energy that McDonald has left to get to class, only to be faced with often insurmountable obstacles, is exhausting.

But McDonald knows he is not alone in these daily challenges just to exist at the university.

“[I see] seven or eight people who have mobility devices, or who have visible disabilities [across campus]. And I know the faces of every single one because we all see each other.”

When asked if he feels seen by UBC, he laughed.