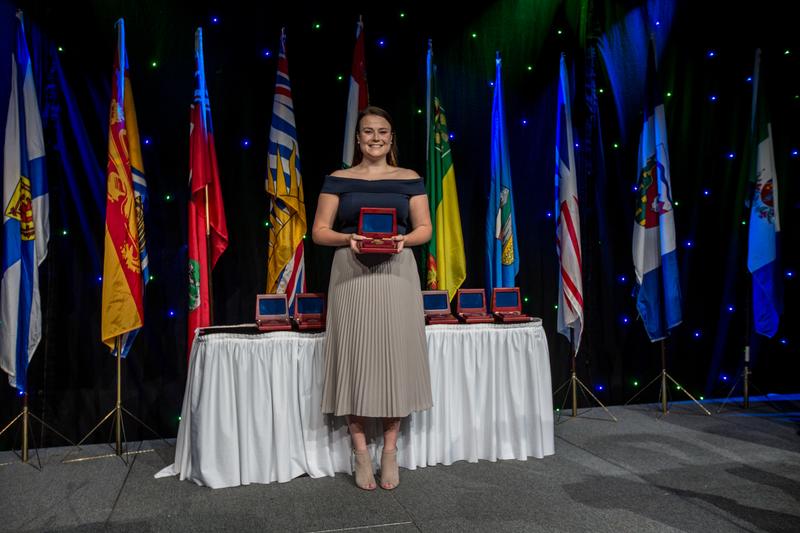 Shortly after moving to Ontario earlier this spring, Veronica Knott’s new apartment was broken into — among her stolen possessions was the 2017 Gold Medal Student Award from Engineers Canada she had accepted just a few weeks ago.

Knott received the award for her work towards making engineering more inclusive and diverse. The award, considered the highest national student engineer award, is handed out by Engineers Canada, the national organization of the provincial and territorial associations that regulate the practice of engineering in Canada.

Fortunately for Knott, Engineers Canada has agreed to replace the stolen award.

“It’s kind of crazy — it’s surreal, it’s humbling,” said Knott. “The thing about student government is that you get really tired, you burn out. You can easily forget why you do these things, like, ‘this doesn’t matter, it’s just student government, this is stupid.’

"And then they do these interviews and you look back and ... it reminds you that you can make a difference.”

Indeed, the mining engineering student has had her hands in many aspects of student government, from her tenure as UBC Engineering Undergraduate Society (EUS) president, to being a former student representative on the UBC Board of Governors, to chairing several AMS committees. In 2013, she chaired the National Conference on Women in Engineering, now known as the Conference on Diversity in Engineering. The following year, as EUS president, she started the tradition of the Iron Pin Ceremony for incoming first year engineering students to instill the importance of ethics and professionalism in the field early on.

Knott said that while her work always had the mandate of achieving more diversity in engineering, there was a personal aspect to it.

“I’ve had an experience where I grew up with fantastic parents, a great high school and then I got to UBC and I felt welcomed,” said Knott. “But I saw that other people weren’t being as welcomed.”

That experience drove her to pursue a mandate focused on inclusivity in the EUS.

“For me, it was a matter of ‘how can we make everyone feel like they can be an engineer?’ People should be able to decide what they want to do, but they should face no limitations. That’s just been my passion.”

Her passion extended to student experience as a whole and she served on the UBC Board of Governors where she was elected to advocate on behalf of students. The experience, she said, was very different from being president of the EUS.

“When you’re a student representative on the Board, your job is to represent the students — you don’t have a whole society behind you.” Nevertheless, she persisted and served on the Board for two years until her second term ended in May 2017.

“What I felt like I could do for students was really to just give them a strong voice about the value of student experience [in] conversations about mental health and student supports, and continuing the conversation about the issues of increasing tuition and impacts of the pure cost of living in Vancouver,” she said. “It’s about being a mouthpiece for issues that are important to students.”

All of her hard work hasn’t come easy. Her grades took a toll and she struggled to find a work-life balance. She wrote in a post on LinkedIn, “Big change, gold medal change, isn't made by one person. It's made by an army, an army of allies supporting, collaborating and dreaming. That's when you make positive change.”

Her “army” includes people like UBC Associate Dean Elizabeth Croft, who nominated Knott for the Gold Medal Award, as well as current Board of Governors student representative Jeanie Malone, AMS President Alan Ehrenholz and Mark Bancroft, who were members of the EUS executive team when she was president.

Now, after six years at UBC, Knott is across the country in Ontario working for Barrick Gold, the largest gold mining company in the world. She will be working for a year before returning to UBC to complete her mining engineering degree.

“I swear, the hardest thing I ever will do is graduate,” she said.

She hopes that after graduation she will be able to work for a company that supports and fosters diversity, especially because engineering is becoming increasingly valuable in Canada.

“It’s not about quotas and it’s not about numbers — it’s about saying that right now there are aspects of our society that tell women and minorities that they can’t be engineers,” she said. “There’s going to be such a demand for engineers, especially in Canada, and the only way we’re going to be able to fill that demand is if we can be diverse.”

Knott also knows that her work towards inclusion won’t stop when she crosses the stage at the Chan Centre.

“The future is very bright for engineering. I’m excited to be part of a profession that is doing so much self reflection and dreams so big.”