Our Campus: Veronica Knott takes on the world, and BoG 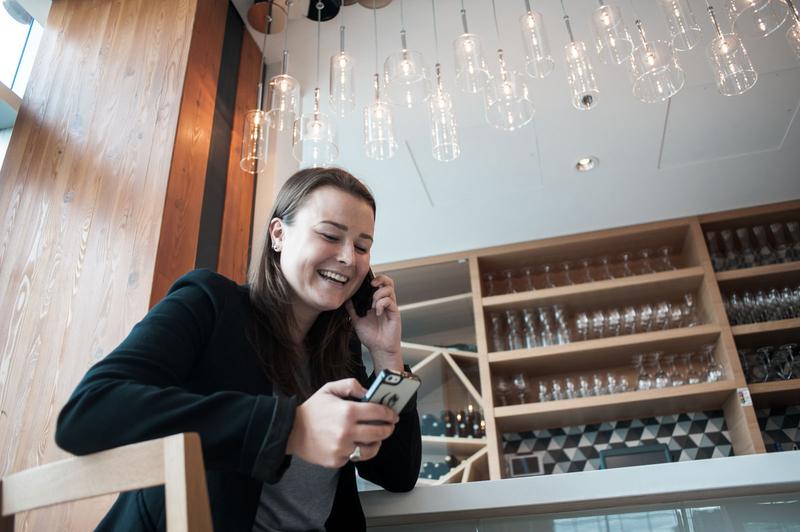 Veronica Knott using two phones during a photoshoot at the Perch restaurant in the New Sub.

As the fight over proposed international tuition increases heats up, Veronica Knott will inevitably be at the centre of the storm. The fifth-year mining engineering student is one of three student representatives on UBC’s Board of Governors, which is in charge of approving the tuition hikes.

Knott decided to run for BoG after attending one of their meetings last winter where housing fee increases — the subject of large student protests last fall — were discussed.

“I saw AMS students really speak up and I sat there and I said, ‘That's what I want to do. I want to be able to articulate and to express and be a strong student voice on the board,” Knott said, recalling how she realized that student representatives make a difference in votes concerning student life.

Knott’s responsibility as a student member of the BoG is to act in the best interest of the university, but she described herself as a “megaphone” amplifying the student voice and ensuring that the Board hears it louder every time they meet.

Although students may feel that their voices are not heard on topics such as tuition increases, Knott believes the board strives for a balance between what’s right for the university and consistently listening to the students.

“They do care … I think I would have given up on this role a long time ago if I felt like they didn't care,” she said.

I grew up in this world that taught me that being confident and expressing myself was essential.

Before being elected to the board, Knott has been deeply involved in other campus extracurriculars such as president of the EUS, chairperson of the National Conference for Women in Engineering, chair of the AMS Executive Oversight Committee and more than 30 other committees.

“I grew up in this world that taught me that being confident and expressing myself was essential,” Knott said.

Her confidence was cultivated by parents who pushed her to be brave and express her mind. As part of an annual family tradition — a family gathering they called a “bonfire” — Knott has had to perform skits in front of an audience of 40 family members ever since she was five years old.

Going to an all-girls high school also fostered her self-confidence.

“Our motto was about making a difference and empowering women,” Knott said. Until grade 12, it hadn’t occurred to her that women didn’t go into STEM as often as men — or in her words, that “girls didn’t rule the world.”

As president of the Engineering Undergraduate Society in 2014-2015, Knott understood both the importance of being bold when representing the voice of students and the value of accountability.

“I learned that you have to be transparent and you have to explain your decisions,” Knott said of the times when the EUS council challenged her to justify her decisions. By holding her accountable, they taught her to be a good leader.

Her proudest accomplishment as president of the EUS was creating the Iron Pin Ceremony, an event in which every first-year engineering student recites a code of ethics and receives an iron pin.

“It was probably one of the best moments of my life and I think that was a team that believed in what we were doing, which was about making the EUS a more inclusive place and a more welcoming place,” Knott said, noting that she still sees students wearing their pins with pride.

But organizing the Iron Pin Ceremony was not without setbacks.

“A lot of people were insulted by an ethics ceremony because they thought engineers were ethical enough already," said Knott, explaining how mean-spirited Facebook post criticizing the event brought her to tears. That’s when engineering Associate Dean Elizabeth Croft stepped in and convinced Knott not to allow the criticism to get to her.

“It was just one of those key moments where it actually really mattered because if I hadn't had a female engineering mentor, I may have given up," said Knott.

Her leadership at UBC has made Knott realize that she wants to dedicate her future to impacting society and hopes to apply her mining engineering degree to work on environmental and social policy.

As for her current duties, the proposed tuition increases will be discussed at a BoG Standing Committee on November 24 before being voted on by the BoG on December 3.

Knott said she wants to take the feedback she is hearing from students during the university-organized consultation sessions and “make the board feel it.”

In June, Knott was the only student to vote against the original resolution on tuition increases. She thought the proposal was incomplete and left unanswered questions about how the changes in tuition would impact diversity.

"Students elected me because they know who I am,” she added. “They know I'm a straight shooter and they know that I voice my opinion no matter what the situation.”