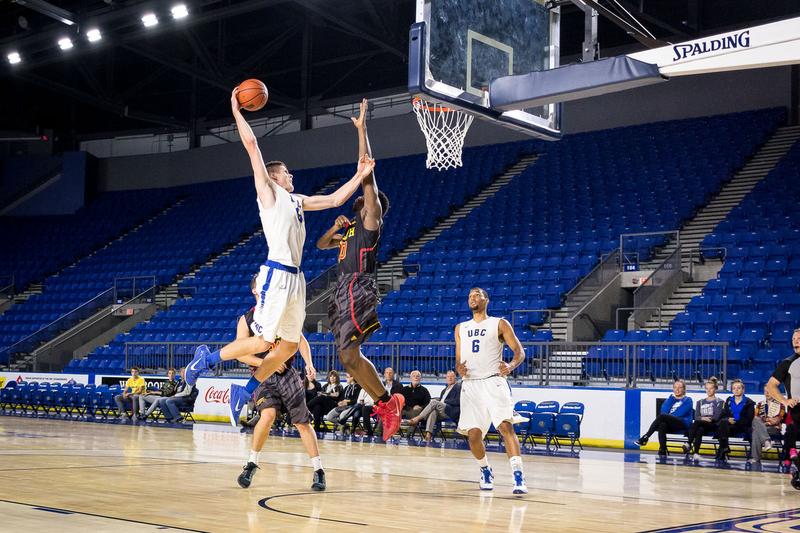 Why don't UBC students care about the Thunderbirds?

In the early weeks of August 2016, the AMS released the latest results of the Academic Experience survey, a yearly survey carried out by market research company Insights West to figure out the issues and topics that students were concerned about.

The results tend to produce a fair amount of discussion at UBC. For example, the survey in 2014 revealed that only 45 per cent of UBC students felt safe on campus at night, and the iconic blue phones were revamped and the Safewalk program was bolstered with these safety concerns in mind. This year, many of the same issues are still on the forefront.

In this year’s “belonging” section of the survey, two statistics stand out: only 56 per cent felt a sense of belonging on campus and only 15 per cent felt connected to the UBC Thunderbirds. It’s a new addition to the survey. For Aaron Bailey, an integrated sciences graduate, Board of Governors member and former AMS president, those numbers are all too real.

“It’s a true statistic and it was true at that point, and it hasn’t improved since we won the Vanier Cup, since we had 8,000 people at Homecoming,” said Bailey.

“I asked Jenna [Omassi, former AMS VP Academic] to put those questions in the survey because I knew the lacklustre answers we’d get, and it would give me fodder to go to the institution and say, ‘We’re failing in this area — let’s do something about it.’” 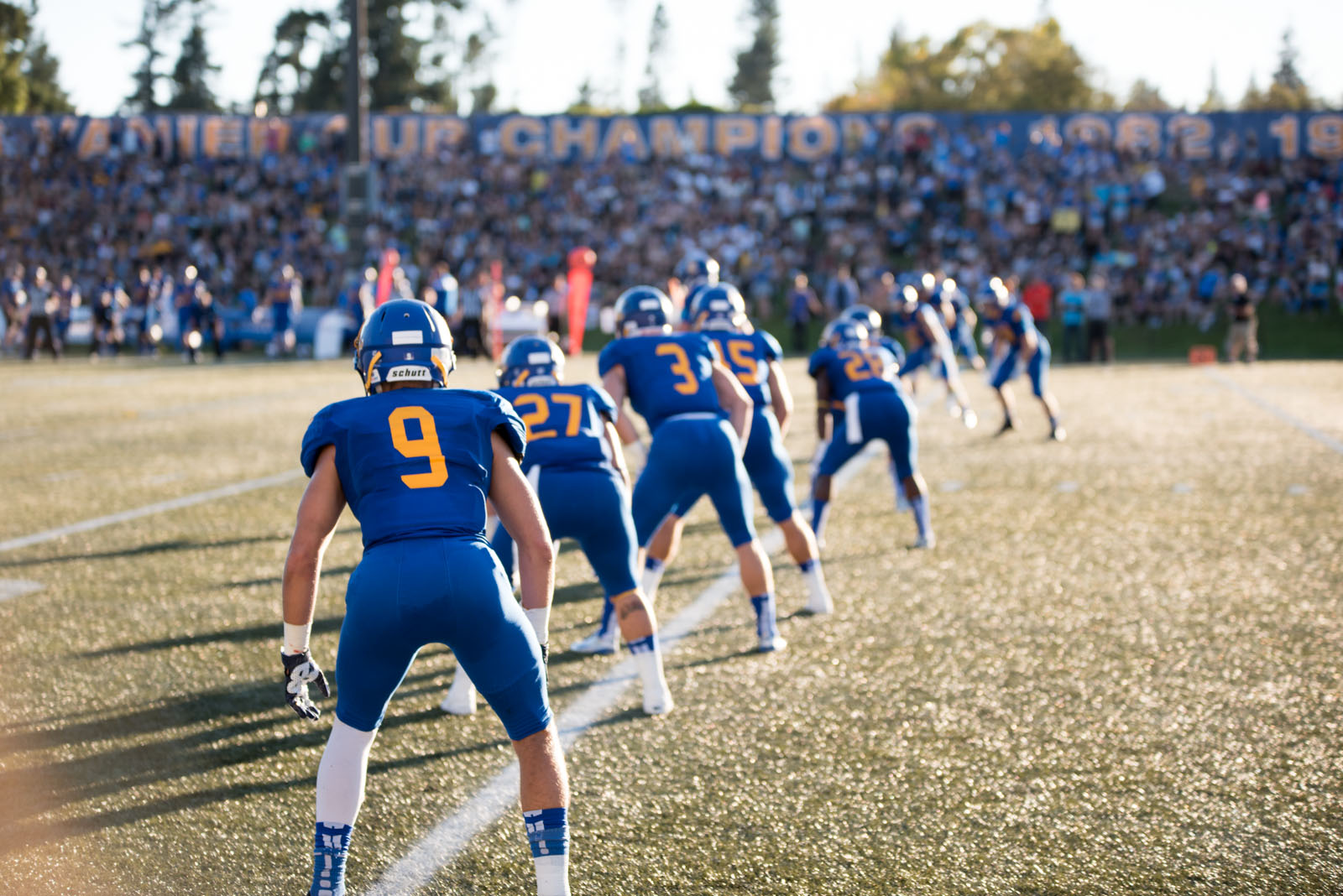 Despite the recent upticks in attendance at occasional big games — the CIS Final 8, Homecoming, the Winter Classic, the Hardy Cup semifinal — the average number of people at most games still isn’t more than a couple hundred. Even for the ever popular football, the average turnout in the last 10 years has been 1,418 fans per game.

“It's so hard to even get people out to a football game, which is normally a viewership sport,” said Nicole Drummond, a fourth-year student who plays back-row for the UBC women’s rugby team. “Like, for Homecoming, they pull out all the red carpets of free beer or $3 beer to get people to come, and then everybody leaves at half-time and you kind of wish that people would care more — feel more involved in the T-Bird spirit.”

This lack of interest in the Thunderbirds by the student population is a quiet crisis that some groups on UBC have tried to solve. There are the usual suspects: it could be the lack of awareness of Thunderbird teams past the first few weeks of school. It could be the overshadowing of Canadian leagues by the NCAA in popularity, competitiveness and expenditure. In addition, it could also just be that the sports culture at UBC just isn't strong enough.

“There’s a lot [of reasons] and I won’t ever claim to have the answers right now because if I did, I wouldn’t have a job,” said Bailey, who currently works with the UBC Athletics department as an engagement strategist. “[UBC is] super academically intensive [and] research focused. People are here to learn, to study and to study hard.” 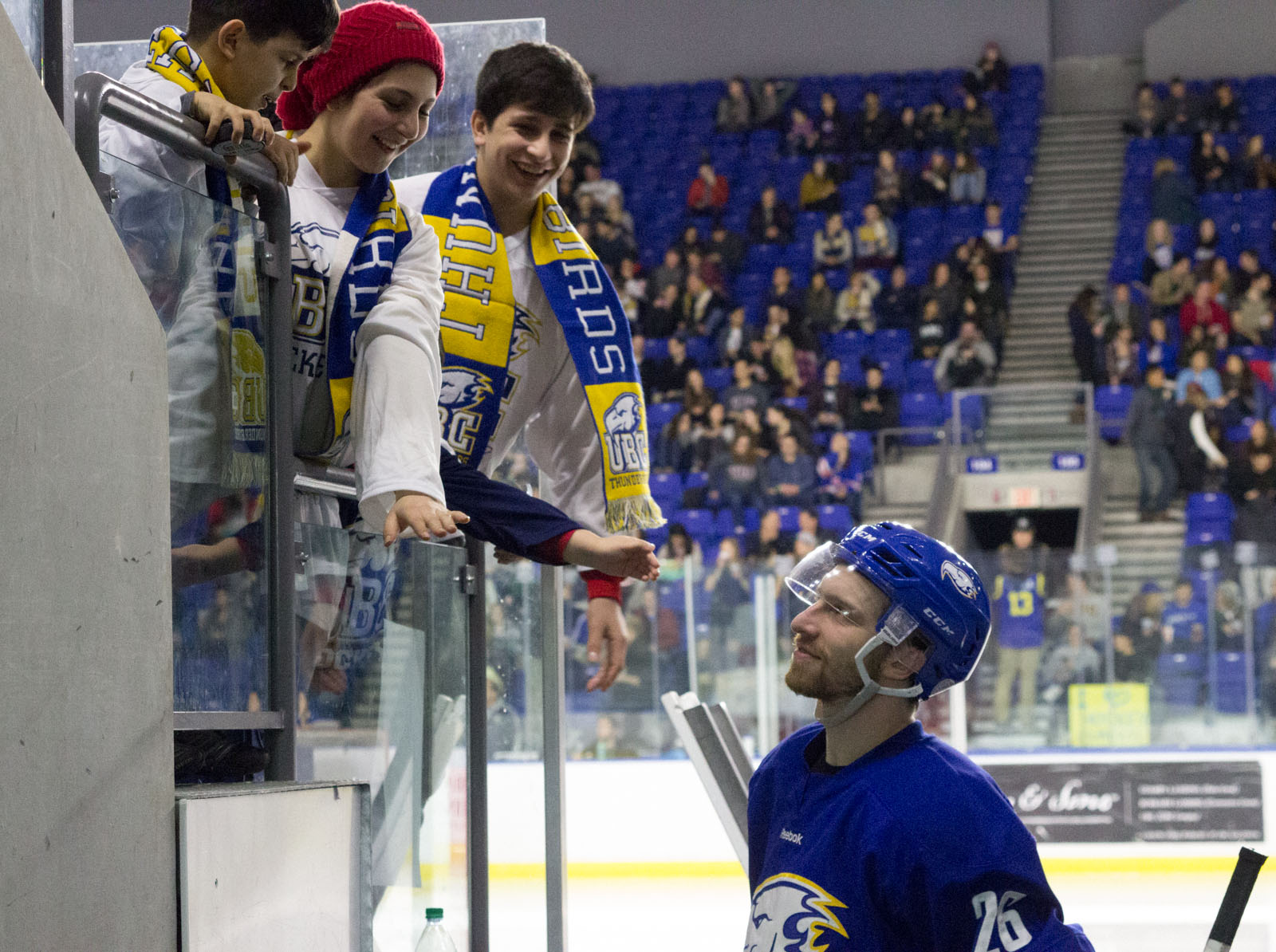 Bailey said that historically, the target demographic for sports at UBC has been American students, and marketing and promotions and ads have largely been tailored to that. But that’s a mistake since these American students have bigger priorities and they aren’t the only students on campus.

“How do we market to a student who has never seen a game of American football and [has] no idea what the rules are? Do you want to go and sit and be confused for three and a half hours?” said Bailey.

Lukewarm school spirit is not a new problem and neither are the attempts to make it better. In 2006, the Blue Crew was formed in an attempt to bring more students to ice hockey games. According to an article by The Ubyssey in 2006, the Athletics department was taking notes from their peers from down south.

The Blue Crew program was modelled after the University of Miami’s “Red Alert” program. The main function of this type of program was to get people excited about the Thunderbirds and the reception of the program was largely positive. The membership for the program grew consistently.

But five years down the line in 2011, school spirit and excitement still was not there. UBC still did not care about the Thunderbirds.

“It’s not translating to [students] coming to games consistently,” said the then-Associate Director of Intercollegiate and High-Performance Sport Theresa Hanson in an interview with The Ubyssey. “As the year goes on, even though all our teams are still playing, students start getting busy and have other priorities.”

“It was just a vessel for selling season passes. Although they had some paid staff members who led the charge on it, it really was, ‘Buy a season’s pass, here’s a free t-shirt. Hopefully you show up to games,’” said Bailey.

Five more years have passed since then and the Blue Crew has mostly been shied away from the limelight, and in its place stands the Bird Cage. Bird Cage is the “Blue Crew 2.0 — a spiritual successor,” according to Bailey.

For Homecoming, they pull out all the red carpets of free beer or $3 beer to get people to come, and then everybody leaves at half-time and you kind of wish that people would care more.

In some ways, both programs are similar. They both offer a season’s pass and merchandise, and were created to get more students to games. But they also differ in other ways. While Blue Crew was largely pushed out by the UBC athletics department, had paid staff and had people boothing everyday, Bird Cage does none of those things.

Bird Cage was formed in 2015 when second-year student Jake Rusnak and some friends made a Facebook group where they would regularly post when they were headed to interesting games.

“They didn’t have somebody in charge of social media or anything like that. It was literally like a Facebook group of friends — ‘Let's go to see basketball on Friday.’ They would post and some of them would go,” said Bailey.

The athletics department thought it would be a cool idea to create a student supporters club. Rusnak had been in contact with Bailey in 2015, so Bailey reconnected with him.

It was important that the program be “more than just a season’s pass” so as to avoid the mistakes of the Blue Crew. They looked at loyalty programs like the Southsiders for the Whitecaps FC, and made partnerships with restaurants and bars.

As a UBC Athletics staff member, Bailey acted as a liaison between the fledgling student group and Athletics, helping the group with managing their inventory of Bird Cage hoodies and getting loans.

It was also important that the organization was run by students.

“Like Blue Crew, it’s not going to be a community if I just instigate it as a staff member — it's not going to be authentic,” said Bailey. “It’s getting back to the roots and having those conversations with the community, saying, ‘What would you want to see that would make it worthwhile for you to come out?’”

The orchestra of student efforts is also being bolstered by the Thunderbird Athletes Council (TAC) and other athletes on campus. The TAC is a council made up of student-athletes from each varsity team. With about 50 representatives and six executives, the group represents the athletic community to the athletics department.

“It's a way for athletes to kind of connect, either update on things through athletics or create our own connected group that isn’t just connected by athletics,” said Susan Thompson, the vice-president of the council.

The TAC put together its “hype events,” which were largely a couple of games that they aggressively promoted. 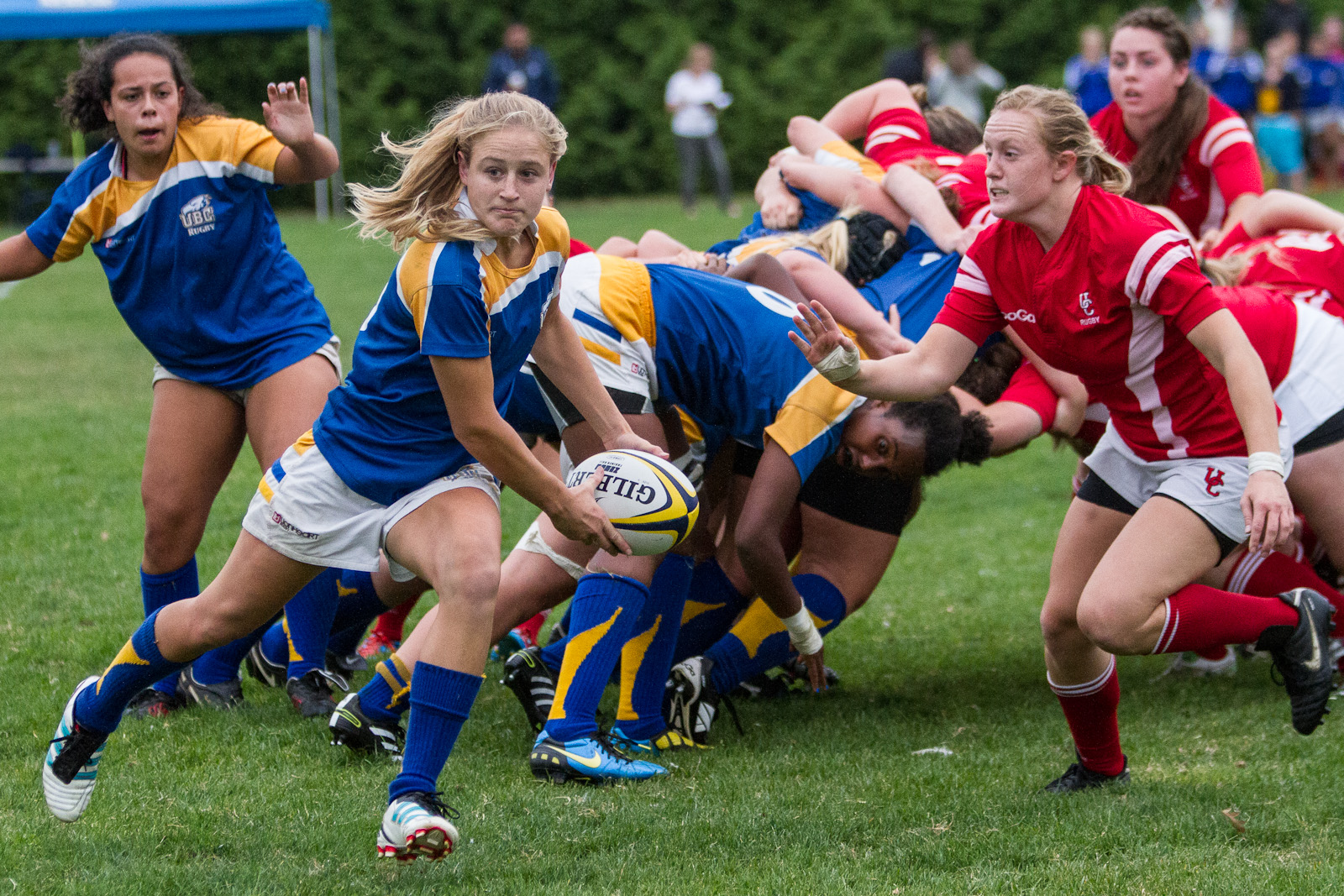 The events were largely successful, as could be seen in the large turnout to previously neglected games including the last game of the season for the women’s rugby team.

“We had a hype game from TAC, and so people came out and had a pancake breakfast with Bird Cage. We'd never had that many people at our game before, and it just makes the game so much exciting to even have the crowd reacting to things and to have everyone cheering,” said Drummond

“I find that the student athletes between each other are very supportive and respectful of everyone's sport,” said Drummond. “I would say there's T-Bird spirit within the athletes and they started this whole Birds for Birds campaign where we support each other because it's [if] we don't even go to each other's games, how can we expect other students who aren't even T-Birds to go to the games?”

In the end, it’s hard to get students to care about anything, especially if they don’t even vote in their own student government elections. The fix seems easy — you market football games as events, not games — but has proven immensely difficult to implement.

There are no real or set answers in this field. The groups have largely found things that work and have stuck to them — more confetti, halftime shows, cozy hoodies, free pancakes, drunk engineers, cheerleaders, marching bands, shirt tosses and wild antics from mascots. All of these come together to add to the atmosphere and feel of the sports games on UBC, and improve the experience at sports games.

Bailey quoted Giles Lepine, the senior athletics director that was hired back in May, saying, “Not everybody — and for that matter, very few people — love sporting competitions. You’re either an athlete yourself , you’re in the industry or you’re like a die hard fan who’s been watching sports since you grew up. You love football, you love basketball, you love soccer. Almost everybody loves a good sporting experience, right?”

The print version of this story stated that Bird Cage started in 2016, when in fact it began in 2015, and that Jake Rusnak was a third-year student, when in fact he is in his second year. The Ubyssey regrets these errors.