Confessions of an Albertan environmentalist

Alberta is not the villain in the climate crisis story. Albertan workers are just as much victims as anyone else.
Tara Osler 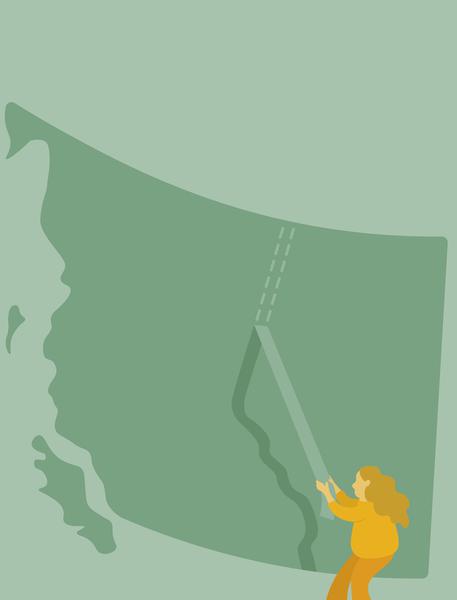 I wasn’t one of those tree-huggers. Sure, we recycled, but no one would define themselves as an ‘environmentalist’ — that was life in Alberta. Of course, that isn’t an choice now.

Now environmentalism is my thing, whether I want it to be or not. I made my sign and marched along with the 100,000 people in Vancouver back at the first climate strike. That same day, about a hundred people gathered in Calgary for the same purpose, outnumbered by the counter-protesters in their exhaust-spewing trucks. They didn’t get the day off of school like we did — that would be unheard of in Alberta.

If I talk about climate action in front of people in my home city, I get the ‘friendly reminder’ that everything I have in life is due to the wealth that the oil and gas industry has brought to my province. I know that they’re right — it paid for my tuition and my cushy Vancouver studio apartment.

It does feel traitorous to march alongside critics like Dr. David Suzuki — who is such a persona non grata in Calgary that my parents visibly cringe at every mention of his name. I rarely talk about climate action in front of most people back home — it’s just not worth it. I don’t agree with their views — there’s concrete scientific evidence of the climate crisis, and I know that the oil and gas industry has to meet its end as soon as possible if we want to remedy these issues.

I’m damned if I do, and damned if I don’t. If I show my support for climate action, I get criticized back home. If I say anything less than hateful about the oil and gas industry, the movement turns against me.

There is a good reason I don’t tell people I’m Albertan at the get-go. In a second-year political science class, I sat still and listened as one of my peers ranted about the evils of the Albertan oil sands. There is part of me that wanted to say something — but what’s the point? I don’t want to be that girl who’s ‘pro-oil.’

I’ve watched as the oil and gas industry ran my province into the ground. We spent decades building a wealthy province off of this one industry. I wish we had diversified more 30 years ago, but at the time it seemed like the wellspring would never end.

Every year, most of the graduates at my high school would announce their acceptance into one of the many excellent petroleum engineering programs offered in Canada. I still think about those students. Most of them would have ﬁnished those degrees in the last year or two, only to ﬁnd that the industry they’d trained for was a wasteland. When my class crossed the stage at the height of the last oil recession, fewer than half of us went down that path.

But what jobs are even left in Calgary? In the last couple of years, hundreds of thousands of jobs have been lost, and they are not coming back. What are we supposed to do? Most people spent their whole lives training for and working in the oil and gas industry. Where are they supposed to go now?

It is not that Albertans are climate crisis deniers. Most of the people in my life believe the science. They’re not ignorant – they’re scared. And they have every damn right to be. They feel abandoned by their federal government and by their fellow Canadians.

If we shut down all oil and gas production tomorrow, it wouldn’t be the CEOs of energy firms that would suffer. It would be the working-class Albertans who are already struggling because they trained for jobs in a field that is disappearing.

Where is Alberta’s place in the climate action movement? The Sustainabiliteens promised at the first #fridaysforthefuture strike in Vancouver that the workers in the oil and gas industry would not be left behind, but I have yet to see anyone put forth a concrete policy suggestion.

Alberta has spent decades bankrolling other provinces through the equalization payment system, but when it suffers economically Ottawa has nothing to give. I don’t want people to stay in the oil and gas industry forever. What I want is a policy plan going forward that is not going to leave them in the dust while the rest of Canada marches onwards.

Alberta is not the villain in the climate crisis story. Albertan workers are just as much victims as anyone else. I wish the people in my hometown would accept that an era is ending and look to the future for a way to move on. However, I wish environmental activists across Canada would see Albertans for what they are: fellow Canadians.

If we want to combat the climate crisis effectively, we cannot do so divided. Alberta has never been the enemy – don’t make it into one.