Barred from the System: Creating Communities at UBC 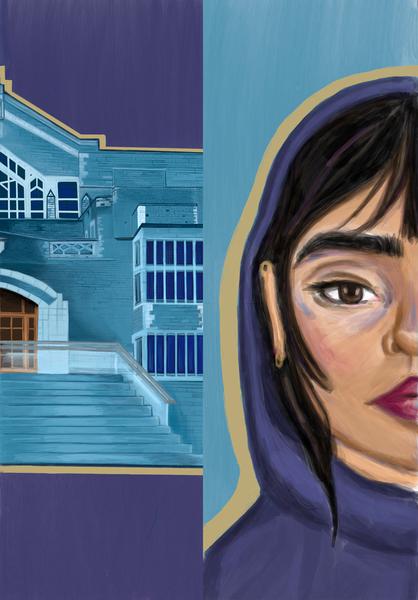 In 1986, Systems, a club in downtown Vancouver, refused entry to Chinese Varsity Club (CVC) members despite the fact that they had a partnership. The nightclub, which only survives today in memory, claimed that it was hosting a private party in order to circumvent discrimination laws. They also noted that it refused entry to the members on the grounds of the potential for ‘gang-related’ issues.

“The doorman was classifying us as a gang just because we were a large group [of Asian people],” then-club President Steve Ling had told The Ubyssey at the time.

When The Ubyssey followed up with Systems regarding the racist refusal of entry, the club mentioned policies that allow business owners the right to refuse service to anyone suspected of disrupting the business. Ling, along with the CVC, lodged a complaint to the BC Council of Human Rights as a way to bring awareness about racism within Vancouver. The current president of the CVC, Daniel Chen, said that the complaint had been dropped.

“Prejudice and racism looks different now from 30 years, 35 years ago, but I think this is a good reminder of how far we’ve come as a club,” Chen added.

The CVC is not the only club to face discrimination. Five years ago, during OUTweek, a pride flag that was raised for the event was found burnt on the flagpole. While the event left members of the Pride Collective feeling shaken, there were also concerns for the future.

“We're just worried about repeat incidences or if this is not a one-­time occurrence,” coordinator Rachel Garrett told The Georgia Straight at the time.

Garrett was correct in assuming that there would be more incidences.

Two years later, a small transphobic demonstration occurred outside of the Nest. Quickly, a group of 2SLGBTQIA+ supporters came to raise pride flags in front of the hate-filled signs from protestors.

“We don’t need hatred right now. If anything, we need a lot of love and support at this time so it’s just saddening,” Tanveer Romeo, a UBC student who took part in the counter-protest, told The Ubyssey at the time.

Club members highlighted the need for support within the Queer community.

“Queer-specific groups are important for young adults, in this emerging transition between adolescence to adulthood to find the community when that community might not always be readily available,” Andy Griffin, a sociology graduate from UBC, previously told The Ubyssey.

Black students have also endured numerous racist incidents on campus. A recent incident was the racial profiling of a Black student by campus security. In June 2020, graduate student Savoy Williams was barred from entering Buchanan Tower despite providing campus security with a letter of permission from his supervisor.

Malini Romeo, current VP external of the Black Student Union (BSU), explained that in the aftermath, “it was the Black community that kickstarted the response and demanded action be taken in order to support and uplift the student.”

While discrimination within the UBC community is not a thing of the past, there are now some safe spaces for members of marginalized communities to gather and find support. According to UBC Student Services, there are more than 350 AMS clubs on campus, but in spite of this, there are still students who fall through the cracks.

A home away, from home

UBC was first formed in 1908 when the legislature passed the University Act, though it wasn’t until 1925 that the campus opened in Point Grey. When UBC was still operating in the ‘shacks’ on Tenth and Laurel, it only had three faculties: arts, applied science and agriculture.

By 1930, a UBC census reported that there were 1,904 students, only 41 of which were international. Today, UBC has a total of 69,287 students across its campuses. In addition to far larger numbers, UBC also has students coming from far more places. In 2020, UBC hosted 7,337 international students from East Asia alone.

As UBC’s student base has become more diverse, its clubs have also diversified. UBC hosts many clubs, such as the Pride Collective, the BSU, the CVC, UBC Indian Students’ Association, known as UTSAV, Brazilian Student Association (BRASA) and many more.

The oldest of these clubs, the CVC, was formed back in 1930 by a group of eight Chinese students to foster a sense of community between the Chinese students on campus. As years went on, the club grew in number and began branching out to other activities, such as social events and ski trips.

Today, the CVC has 11 departments, each one focusing on a different aspect of the club. In addition to parties, which are a large part of the CVC’s reputation, the club also includes activities for those who are not as interested in partying.

Chen explained that the club “has definitely changed a lot” from when it started out as a club for Chinese students to play varsity sports.

One of the big changes that the club has undergone recently is its rebranding. Chen explained that the club “purposely changed [its] branding to remove the Chinese Varsity text from [the] logos to just [become] ‘CVC’ because we wanted to take a step towards being more inclusive.”

One of the major events that the Pride Collective hosts every year is PrideWeek, which is a “week-long festivity of everything from discussions and workshops to poetry and dancing.” In addition to hosting yearly Pride events, the collective also holds weekly discussions. These discussions aim to provide a safer space for students to ask questions and connect with other 2SLGBTQIA+ students.

While pride events on campus today are celebratory and upbeat, it was not always this way. Ron Dutton, founder of the BC Gay and Lesbian Archives, previously spoke to The Ubyssey about earlier days in the club’s history when being closeted was the norm.

“The phrase we use to have was, ‘You don’t tell somebody that you’re gay until you’re willing to lose them,’” Gerald Williams, a club member from 1988 to 1991, previously told The Ubyssey.

Today the Pride Collective strives to provide a space for 2SLGBTQIA+ students to connect and support each other on campus.

Being able to connect to other students is also a priority for UTSAV. Founded in 1980, it aims to provide a “home away from home” for students of Indian descent. Hardika Naik, UTSAV vice-president, explained that organizing big events such as Holi and Diwali celebrations has created that sense of community.

With everything online this year, the club has turned to using breakout rooms in order to help students connect.

“In our welcome-back event, we had all students in the online event [join] breakout rooms and gave them a few questions to talk about, to [get] to know each other so that they can make new friends from their own culture,” Naik said.

On top of creating spaces for Indian students to connect with each other, Naik said UTSAV “would love everyone to see [Indian] culture and enjoy it as much as [they] do.”

As UTSAV represents a large portion of UBC’s student population, it does its best to work with other clubs to host events specifically geared towards the vast number of cultures that fall under the umbrella of Indian identity.

In many ways, the CVC, the Pride Collective and UTSAV were all formed in order to create a support network for students. Today, these clubs hope to continue forming the bonds between students that have kept their clubs thriving for years in the wake of a campus that may not always be so welcoming.

As UBC’s campus works towards becoming more inclusive and welcoming to all of its students, more clubs have been created with specific roles.

One of these new groups is the First Generation Students Union (FGSU) that formed in January 2019. Jaskirat Mahil, co-president of the union, explained that the group was created out of a need for support.

A ph juysical space on campus is the next step in fostering a sense of community between first-gen students.

“Not necessarily on the scale of the Global Lounge, but something along those lines where there’s a space where first-generation low-income students can talk and help each other and mentor each other,” Mahil explained.

One benefit clubs have today is updated technology. The FGSU has capitalized on this advantage by hosting the Gen One conference virtually earlier this year. Similarly, BRASA has used technology to host panel discussions and game nights on Discord to foster the sense of connection that has been lost during the pandemic.

“Especially with the pandemic, BRASA has seen how casual events tend to be much more successful in making people feel welcomed and included.”

The BSU also uses technology to bring together the Black community on campus. Romeo said that the BSU is “dedicated to furthering the representation, education and empowerment of UBC’s Black community.”

Achieving this sense of community can be tricky online, yet the BSU has been proactive in organizing virtual events such as movie nights and information sessions that provide opportunities for Black students.

“What makes UBC BSU special is our community and that is, and will always be, the foundation of our club,” Romeo said.

‘In the same boat’

From 41 international students in 1930 to 7,337 international students today, UBC has become more diverse than it used to be, but there is still a long way to go before everyone feels welcome and safe on campus. The last few years have seen the creation of various identity groups, such as the BSU and the FGSU, but there are still many students that cannot find support in the form of identity groups.

Many identity groups at UBC were formed because of a lack of support for students from marginalized groups. The FGSU was spurred into creation by the life-threatening consequences of having no support on campus.

“One of our fellow first-gen peers was actually considering committing suicide because they were overwhelmed and overburdened by all the issues they were facing as a first-generation student,” Mahil said.

“I feel like just having that voice and helping others realize that there are other students in the same situation … and providing guidance and advice can really go a long way,” said Mahil.

“I know it would have for me.”

Like the FGSU, the BSU was formed because the founders “recognized the need and opportunity for something like [the BSU] to be created,” Romeo said.

However, the creation of clubs and groups alone does not create a more welcoming campus. Many of the clubs have to work hard to ensure their members are being heard by the UBC community.

“It is hard to fill the gaps and create opportunities for Black students at UBC in a range of areas and expertise,” Romeo said.

As more and more clubs are formed, more students are able to find the support they need to feel included on campus. As safe spaces become more specific, more options open up for students trying to feel included in the UBC community.

“I think the benefit of clubs is that they’re more niche-specific, and every club has their own vibe, especially for social clubs. [Students] coming into UBC don’t know exactly what they’re into either, and people change a lot, right? So, I think clubs are an essential part of campus and since it’s student managed, it’s more personable too, and more reflective of, the current student body,” Chen said.

In some ways, the diversification of the student body has also given the chance for clubs to become more inclusive spaces for their members.

“It just got so much better, it’s unbelievable,” Richard Summerbell, a former member of Pride UBC, previously told The Ubyssey. “[For] anybody who’s ever thought ‘I’m down at the bottom of the sociological garbage chute, and there’s just no way I could ever climb up,’ the miraculous is done.”

“One thing that really helps our group is that everyone is in the same boat. We really bonded because of [our] similar situations.”

— With files from Sheldon Goldfarb and Bailey Martens