Cricket continues to thrive on campus, despite not having an official roster

Between Rashpal Dhillon Track and the National Soccer Development Centre in Thunderbird Park lies a small parking lot. It’s nothing to write home about until you hear about what used to stand in its place: Spencer Field.
Written by
Lucy Fox 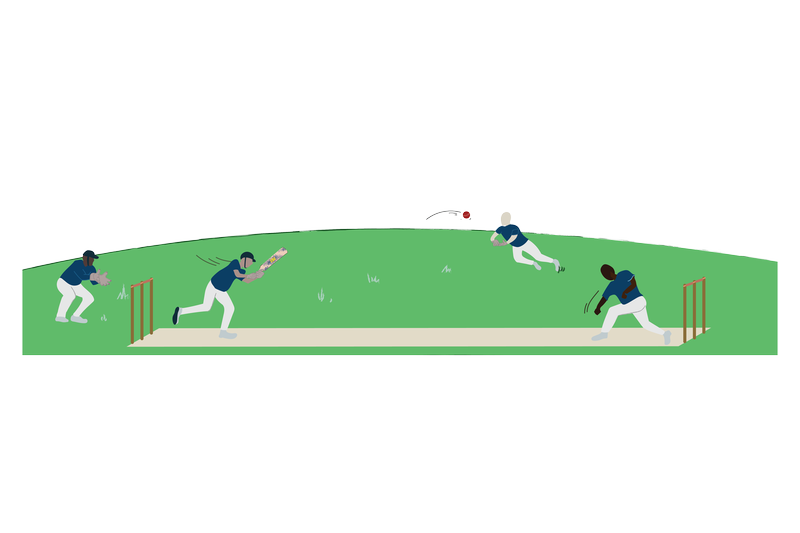 Between Rashpal Dhillon Track and the National Soccer Development Centre in Thunderbird Park lies a small parking lot. It’s nothing to write home about until you hear about what used to stand in its place: Spencer Field.

Funded by a $75,000 donation from the Chris Spencer Foundation, Spencer Field used to be the home of field hockey and cricket at UBC.

Cricket has a history on campus that, according to the UBC Athletics website, dates back to as early as 1938. Renowned UBC athlete and professor Dr. Harry Warren was the first to bring the sport to campus alongside UBC cricketer Basil Robinson. It took off from there.

Spencer Field — alongside an artificial wicket nearby at Wolfson Field and some allotted gear storage in the old Sports Medicine Clinic — hosted UBC’s three cricket teams at the sport’s height. In the ’70s and ’80s, those teams were UBC One, the Occasionals, and the varsity team whose roster was initially the third-tier team of the trio.

“It was probably [called varsity] because, way back in [the beginning], it had been a varsity team full of young, bright undergrads waving the UBC flag and whatnot,” former team captain and manager in the ’70s and ’80s Norman Baldwin explained in a 2017 interview.

At the time, all three rosters featured students, staff and faculty interested in the sport — many of which still hold roles on campus today. The list includes chemistry professor emeritus Brian James, geography professor emeritus David Ley and UBC forestry Associate Professor and Program Director Simon Ellis, who led the varsity team with Baldwin in the late ’70s.

Though many of the sport’s original athletes on campus were British, cricket was a hub for those interested in the game and brought together various cultures as it continued to grow.

“We had students from Zimbabwe … South Africa, from England and whatnot, coming out [to play] for a year or two or just coming out to do their master’s or their PhD,” Baldwin said.

For Baldwin, those years playing at Spencer Field are some of his fondest memories, both for the games themselves and the tribulations of cricket being a niche UBC sport.

“A number of times, we’d be in the middle of a game and all of a sudden the sprinklers would come on. You can just see 22 people running across the field, very funny.”

After a peak in the ’70s where all three teams flourished, age would be the program’s downfall. As athletes aged out of the game and new blood stopped coming in, the varsity team absorbed the Occasionals — a move that renewed UBC cricket for another few years.

“I ended up sort of in charge of that team and captaining that team for a number of years … we had a very, very strong team — won several divisional championships and we moved our way up the divisional ladder here,” Baldwin said. “That was a great time for cricket at UBC.”

The teams even took over maintenance at Spencer Field to ensure that cricket kept running. Alongside teammate and long-time friend Ellis, Baldwin worked with UBC’s groundskeepers to ensure their pitch was in good condition.

But, as a non-funded UBC team, their reign in Thunderbird Park didn’t last.

For Baldwin, it wasn’t that UBC wanted cricket off campus; it was just time to start upgrading facilities in the area, and something had to give.

“We didn’t really want to stand in their way and so we just did what all the other cricket teams do in Vancouver which is [to] just use one of the Vancouver Parks Board parks,” he explained.

The UBC team had dwindled down to just one roster by that point. They moved to Trafalgar Park on West 23rd Avenue, where they survived under the UBC name and then as the Shaughnessy Cricket Club for several more years before dissolving.

“I loved playing there; fantastic ground. Beautiful grass, nice sort of surroundings, was a great place to play and a great part of my earlier life. It’s great that it’s now still being used for sports, now with the Whitecaps, but every time I drive by it’s hard not to think of all the many times I played there as a very young boy.”

Thirty years later, the sport does live on, though, in a similar light to its UBC beginnings by flying under the radar, without UBC funding and with an innate ability to bring together international communities.

On August 15, 2018, a group gathered near the Forestry Building and lined a box on the grass. For passersby, it was just another group of students gathering to play a casual sport. It was nothing to write home about, until you took a second look: it’s a cricket game — though admittedly one using the rules of its smaller cousin, box cricket.

Played on India’s Independence Day, the game is one of several that the Indian Graduate Students Association has organized in recent years. This summer, they played in the more accessible box cricket format to appeal to more recreational athletes. They had around 40 graduate students show up and participate, with each getting a chance to bat and bowl.

Since the sport’s varsity decline, games like those hosted by the Indian Graduate Students Association have been one of several ways the sport continues to adapt to campus. The UBC Rez Cricket Club (now seemingly inactive), UBC Recreation cricket drop-in hours and cricket match viewing parties hosted by the Indian Students Association have also provided an outlet for UBC students to enjoy the sport they love.

For Prashanth Krishnamoorthy, the games are an added bonus to the slow-growing community of cricketers coming to UBC — a community that has helped him find his place in the sea of students.

A PhD candidate in mechanical engineering from Southeast Asia, Krishnamoorthy came to Vancouver knowing no one. Through the grad studies fair hosted in his first months here, he found his way into Vancouver’s cricket community, particularly the Indcan Cricket Club in Burnaby. The team, as Krishnamoorthy explained, has approximately seven UBC students currently playing for them with several UBC alumni too.

“I met a few of my very good friends here while playing cricket, most of them Indian, either first generation or just moved here from India,” Krishnamoorthy said.

Meralomas Cricket Club based out of Connaught Park is also a base for UBC players.

“A lot of people do know about cricket, but most of them are from Asia or the UK or South Africa or Australia,” Krishnamoorthy said of those he knows here in the Point Grey cricket community.

Though he plays more competitively off campus with the Indcan team, Krishnamoorthy still appreciates the opportunity to play with other students when games are scheduled at UBC — it brings together his cultural community on campus.

The game’s transition into the culture for Indian students on campus parallels the sport’s own growth worldwide. Originating from England, the sport was adopted into Southeast Asia and grew rapidly after India’s Cricket World Cup win in 1983. Today, it is the most popular sport in India, with televised leagues and professional teams across the country.

Though the varsity days of cricket may be over on campus, it was, perhaps, never a sport that asked for that status in any case. Labelled “the gentleman’s game,” it’s a sport where rules are followed, etiquette is admired and its worth comes from watching it played, not particularly in how it’s promoted.

“We had a ground, we had enough people that wanted to play, and that was it. I don’t think anybody wanted or expected more than that,” Baldwin said.

The sport’s humble beginnings and its ability to bring international communities together still resonate on campus. You just have to find out where the wickets are placed.

'Science is colonial': The complex history of scientific and Indigenous communities