Climate, skiing and snowboarding: UBC mountain-goers worry about the future of the sport

In British Columbia, changing climate conditions and rising average temperatures are threatening the existence of many of the province’s ski and snowboard areas by shortening their seasons and making snowmaking conditions tougher.
Tanner McGrath 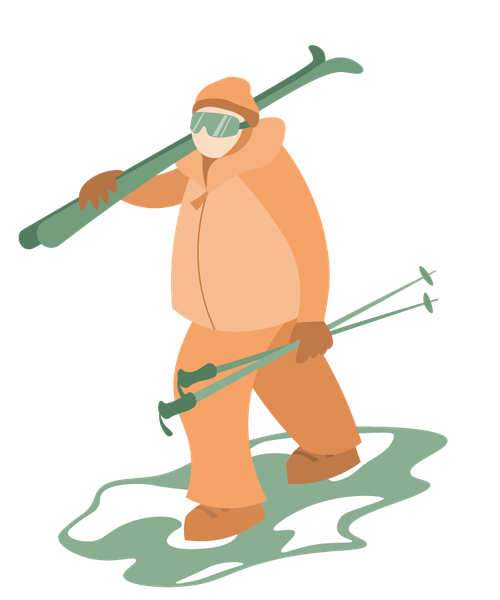 I grew up ski racing in Vermont, at a small family-owned resort called Bromley Mountain. I knew the owner of the mountain well, and he once told me that if the mountain doesn’t make enough revenue to cover all of the yearly expenses the week of Christmas, it’ll run a deficit that year.

This is obviously a shocking statement, but it’s also a very pertinent one, as we consider the long-term effects the climate crisis is having on skiing and snowboarding.

In British Columbia, changing climate conditions and rising average temperatures are threatening the existence of many of the province’s ski and snowboard areas by shortening their seasons and making snowmaking conditions tougher.

“I’ve noticed a change in the consistency of the conditions, definitely,” said Jean Westenberg, a 22-year old UBC graduate student and life-long skier. “In my opinion, the early- and late-[season] snow conditions have been getting worse because the snow is stickier and heavier and there is more hail or rain.”

I asked Westenberg if he thought the climate crisis posed a serious threat to the future of the ski and snowboard industry.

“Of course!” He said. “There is a worrisome trend for the future of the industry for sure and climate change is leading to more and more unpredictable weather conditions, which will affect people’s willingness to hit the slopes.”

The Alpine Club of Canada (ACC) releases a yearly State of the Mountains Report, which highlights the impact of the climate crisis on the alpine environment of Alberta and British Columbia. The 2018 report shows data on the average mean winter temperature of Cypress Ski Resort, located just north of Vancouver, between 1901 and 2015.

That average winter temperature rose about 1.5 degrees Celsius during this period, and it was so warm during the 2015 ski season that Cypress closed down for most of the season.

In the coming years, the conditions are expected to get even worse.

The report went on to say if we don’t substantially curb greenhouse gas emissions, average global temperatures could rise by three to five degrees Celsius by 2100. This temperature rise would spell disaster for Cypress Ski Resort and other mountains in the greater Vancouver area, not to mention mountains all over the world.

“Skiing in deep, natural snow, as opposed to machine-made snow, will be less possible and I believe this will directly affect the industry,” Westenberg said. “The industry will have to compensate for unpredictable weather with lots of snow-making machines.”

Westenberg was concerned about both sides of the industry: the supply of snow to mountains and the demand for skiing by skiers. It’s a common and logical mentality among UBC students — as temperatures rise, it’s going to be tougher for mountains to maintain good conditions. And if the conditions are bad, why would skiers continue to ski?

“If the weather becomes more unpredictable, we might see shorter seasons or seasons with very little snow,” Westenberg said.

If the average temperature at Bromley Mountain rises another two or three degrees, keeping a mountain open with decent conditions during the holiday period is going to become an increasingly complicated task.

If that happens, I don’t know how Bromley Mountain will survive.

As Westenberg and the ACC have pointed out, this problem won’t be restricted to my childhood ski resort — BC’s mountains will be affected as well. UBC skiers and snowboarders are rightfully worried about the future of their favourite winter activity because the climate crisis is having a palpable effect in our own backyard.