Frozen on the SkyTrain

I’d heard about anti-Indigenous incidents, but as someone who wears the white skin of my mother’s side of the family, I had never witnessed the hatred for myself. It wasn’t until starting university that I began to delve deeper into my own culture.
Tianne Jensen-DesJardins 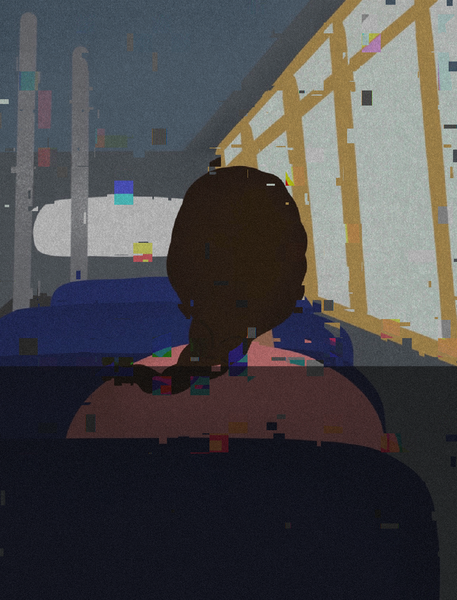 The man wore baggy basketball shorts, an oversized zip-up hoodie and his hands were full of shopping bags. Nestled in the crook of his elbow sat a well-used basketball threatening to topple onto the SkyTrain floor at any moment. Despite having woken up at five that morning and attending a full day of classes, I offered up my seat to the struggling man. He nodded his thanks and dropped into the chair. A few moments of silence went by before he began to gesture to the overcrowded SkyTrain car.

“It’s those damn Natives. They just had to choose a workday to protest a pipeline or something.”

“They already get handouts from the government. I don’t get why they can’t just get over their issues and move on.”

I readjusted my backpack and began fiddling with the cord of my earbuds. Maybe if I stay quiet, he’ll stop, I thought.

A new voice spoke up, somewhere to my left.

“Yeah, just because they don’t have to work for a living doesn’t mean we can all afford to miss work when they block the West Coast Express.”

The addition of this man’s voice brought about more people who just wanted to complain about how inconvenient the protest was for them. Many false stereotypes were brought up about “those Natives” but to this day, I still can’t remember any of them as clearly as the first man’s comment. A moment of shame burned into my memory.

In high school, I learned that being Indigenous wasn’t always seen as a prize. I learned about Louis Riel, and many more important Indigenous figures who had to fight for their rights. But I also accepted the free trips to local colleges from the Aborginal education departments, where I ate the free lunches provided and blushed at the free condoms offered to us.

I’d heard about anti-Indigenous incidents, but as someone who wears the white skin of my mother’s side of the family, I had never witnessed the hatred for myself. It wasn’t until starting university that I began to delve deeper into my own culture. Even calling it “my culture” feels like fraud.

I hadn’t grown up on a reserve and I’d only ever eaten bannock at school. Yes, I had ancestors who’d been forced into to residential schools, but in my memories, the old school was simply the place I went on Saturdays for soccer games. The remnants of the earlier school, wiped out by flooding, are now remembered by plaques along a popular walking trail that circles a park where I sledded as a kid. The distance between what I imagined to be ‘Indigenous culture’ and my own lived experience was staggering.

Being unable to confront that man on the SkyTrain was embarrassing, but being unable to reconcile my identity with myself was so much more harmful. I had avoided digging too deeply into my family’s history because I felt like I hadn’t suffered enough to be proud of my Indigeneity, unlike those who had and spoke about resilience. It wasn’t until I came to UBC that I realized feeling guilty about not personally suffering enough to claim Indigeneity was also trauma. In order to start healing and stop being a coward, I needed to learn more about my history and culture.

The first step to claiming my Indigeneity began with a book. In Arts One, we read a different book every week and wrote a paper about the books once every two weeks. Right around Halloween, we were set to start discussing Thomas King’s The Inconvenient Indian and I couldn’t wait to get writing. After a rushed late-night ambulance ride for appendicitis on Halloween night, my professor assumed I was going to simply skip that essay. I’ll never forget the look on her face when I gingerly walked into the seminar room and dropped my paperclipped essay off in front of her. I wasn’t going to let a minor surgery get in the way of learning more about who I am.

After that exciting beginning to my search, I did a little digging on the internet and learned about the historic places in my hometown that had Indigenous connections.

One night, when I brought up an interesting fact about the foundations of the old residential school in town, my grandmother stopped me and began telling me how my family had its own stories from that place. For the next few months, I repeatedly found myself drifting downstairs to her basement suite to ask more questions about our family.

Now, I’m a few years into my research and I’m far from done. It’s a little easier to bring up my Indigeneity in conversation now, but I’m far from feeling truly comfortable with my identity as a Cree-Métis individual. If I could tell the slightly younger version of myself standing on that SkyTrain one thing, I would tell her to speak up, if not for herself, then for her ancestors who fought too damn hard to be silenced by a white man on the SkyTrain. U