Carving space in the cosmos: For marginalized students on campus, navigating the Greek system comes with ups and downs

For marginalized folks — people of colour, the queer community and disabled people — finding spaces within larger institutions can be complex. Fraternities and sororities are no exception, and these organizations present their own unique issues.
Written by
Bridget Chase 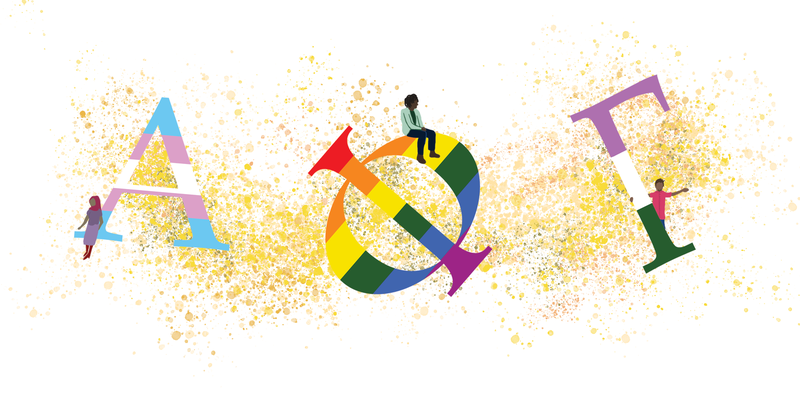 Miselta Ihekwoaba describes the Greek system as “a tiny universe.”

“It’s the exact same feeling I’ve had my entire life,” she said, “of walking into the room and being the only Black person. It’s no different [here].”

For Ihekwoaba, who was born in Nigeria but grew up in Alberta, the idea of joining a space concentrated with people who didn’t look like her was deterring. But after accompanying a friend to rush in her first year as a support, she was surprised to find that she really liked the atmosphere.

Two years later, Ihekwoaba has carved out a microcosm for herself within the greater Greek cosmos.

“I counted and [I think] there’s a total of [about] eight Black people in sororities. And the community I have with them is something inexplicable.”

This story is not uncommon. For marginalized folks — people of colour, the queer community and disabled people — finding spaces within larger institutions can be complex. Fraternities and sororities are no exception, and these organizations present their own unique issues.

“I’d always wanted to join a sorority,” said third-year student Amelia Kimberlin. “I thought Canada was probably a place where I could do [it] a little bit easier than the States.”

Kimberlin, who is from Southern California, was quick to point out the “beachy blonde vibes” associated with sororities in her area. As a sister at Alpha Omicron Pi, Kimberlin is much more keen to sport a suit than don a dress.

“At UBC, I would say that there isn’t a typical sorority girl, which is what I like most about it,” she explained.

“It’s very easy to assume that we are the same because the letters look the same. If you hear about rush maybe you think that’s the same thing as the States, but it’s not,” said Jamie Gill, outgoing president of UBC’s Inter-Fraternity Council (IFC).

Gill, who comes from New Hampshire, was immediately struck by the amount of visible diversity at UBC. Throughout his four years in Phi Delta Theta, he claims to have witnessed nothing but inclusivity — much unlike the stories coming out of the US.

And while no one could quite put their finger on what differentiates the organizations, everyone agreed that they can’t be equated.

“Everybody has this idea that Greek life is just rich, white, Anglo-Saxon, Protestant men,” said Delta Kappa Epsilon brother Will Shelling. “I mean, let’s not beat around the bush, that’s exactly what every stereotype of Greek life is.”

Shelling, who identifies as African-American, feels that the diversity within UBC combined with the size of the UBC Greek system — the biggest in Canada — allows for a breadth of people from all walks of life to make up the unique organizations in Vancouver.

“It’s nothing new, which is an awful thing to say, but microaggressions are to the max,” Ihekwoaba said. She explained how she often has to lay down ground rules with other members when they may not see the full depth of an issue, such as touching her hair without permission.

For fourth-year student Miley Leong, these issues were just too pervasive — and too easily disregarded, in her opinion — to continue engaging with the system. After being a part of Gamma Phi Beta for three years, Leong stepped back and re-evaluated her reasoning behind her association with sororities. Eventually, she decided to leave Gamma Phi Beta in the summer of 2018.

“The Greek organizations aren’t built for people of colour,” she said, discussing how their traditional disengagement with marginalized communities has affected how spaces are designed and programming is developed today.

From focusing on primarily Eurocentric ways of connecting with others to basing events around traditionally Eurocentric holidays, Leong named simple ways that women of colour may feel alienated in the sororities.

Leong at times also felt like she was self-censoring, not only due to her race but her political views. During the 2018 AMS election, a wide-reaching post within a sorority Facebook page that called out an AMS candidate for spewing racist sentiments was deleted, after an executive member deemed it “too political” for newer members to read.

“Having that [happen] kind of confirmed to me the different ways that the Greek system, sororities and fraternities, aren’t even having conversations around gender, race or social inequalities,” said Leong.

When it comes to LGBTQIA2S+ problems, the issue may stem more from a lack of visibility than anything else. Kimberlin called the space “heterosexual by nature” — and though there are a number of queer sorority members, they are more often than not “less out than one might want.” Kimberlin didn’t necessarily place the blame on sororities alone, as a large number of factors inform whether or not someone feels comfortable or ready to come out.

“People haven’t told me, ‘Oh I’m afraid of coming out within my chapter,’ it’s more just that they’re not there in their process yet for their own selves,” she said.

In terms of transgender representation, there seems to be little to none. Grace McKenzie, a former AMS president and alum of the fraternity Phi Delta Theta, waited until she had left UBC to come out as transgender. While she was an active member of the fraternity, she presented as male — her gender assigned at birth.

“I think it would have been a very interesting crisis of opportunity to explore and ask these questions, had I or other folks that I knew come out during their time [in fraternities],” McKenzie said. “I have yet to hear of a single transgender or gender non-conforming person within one of the IFC or Panhellenic [communities].”

McKenzie, who came out in November 2018, explained that she has spent a lot of time reflecting on her time in the fraternity and how masculinity was presented and performed.

“Looking back, there were definitely instances throughout my time in the fraternity system where I probably performed my assigned gender a lot more strongly or forwardly than I was actually comfortable with or that was actually natural for me,” she said. “I used to feel dysphoria at formals, or when we’d have events with the sororities where I’d [feel] like ‘Maybe I do belong over there.’”

It was also difficult to find solutions for disabled people. While the Greek system seems to make an outward effort to promise accommodations for physical disabilities, it is hard to say how different bodies would fit into Greek spaces and programming.

Ihekwoaba acknowledged that the activities, especially those planned for new pledges, involve a lot of physical activity. “Even a lot of the philanthropies are sports events,” she added.

The Panhellenic vice-president recalled that out of approximately 500 applications during a recent recruitment period, only one person had checked a box stating she would be unable to stand for long periods of time. Ihekwoaba confessed that the executive team “wasn’t really sure what to do,” and that she has no idea whether or not that woman is now a part of the sorority system.

Representation as a requisite

“Representation is important,” stated Shelling. “And seeing people like you going out for positions, going and joining clubs, is huge.”

“If I want to see change, I have to go up for it. You have to be willing to enact that change and also be someone that people can refer to and talk to.”

It is with this idea in mind that many of these students have taken on leadership roles in tackling the challenge of enhancing visibility in Greek life, in one way or another.

After Kimberlin wore a rainbow pin on her shirt during recruitment, she was pleased to be approached by an inquisitive queer woman. “One girl came up to me and was like, ‘I saw your pin and I knew I should talk to you.’ I was so happy about that because even if it just worked on one person, that’s important.”

Kimberlin also took initiatives to create opportunities for queer connection within the system. After having a conversation with her Panhellenic delegate, there was the — possibly first ever — LGBTQIA2S+ sorority mixer.

“There were only four people, but it was fun! … I think that there has been a door opened by that.”

For Ihekwoaba, she recalled that diversity on the Alpha Gamma Delta Instagram page was what originally drew her towards that particular chapter. Now, as the VP of UBC Sororities, she wants the organization as a whole to expand that visibility across all of its marketing.

“It’s not okay to just market white girls. That’s not all there is, that’s definitely not all we’re trying to attract,” she said.

And for McKenzie, though she didn’t come out until after taking leave from UBC, she hopes that through open dialogue and visibility, she can make an impact on those who may be confused or questioning their own gender identities while being in a binary-coded space.

“I have no problem calling myself a brother of Phi Delta Theta if my brothers still consider me that way,” she said. “All I know is that it’s my responsibility to make space for folks who are less visible. If that means remaining a brother of Phi Delta Theta and also using female pronouns and being the person that I feel inside, [well] if I’m okay to do that and my brothers are fine with that, I don’t care.”

McKenzie, who felt that the reaction from her brothers to her coming out was “overwhelmingly positive,” recognizes that sometimes having tough conversations may also prove helpful in education and growth. After a close friend and former roommate who had previously expressed transphobic sentiments didn’t reach out to McKenzie post-coming out, she reached out to him herself. Within 10 minutes, her brother recognized that she was still the same person.

“[He] said, ‘It took no time at all for me to realize that you’re still [you] ... it’s just you becoming a more authentic version of yourself,’” said McKenzie. “Which is ironically the motto of Phi Delta: become the best version of yourself.

“I think I’m living the motto of the organization — maybe a little bit creatively.”