Picking things up after a crisis

Picking thins up after a crisis
Written by Bridget Chase 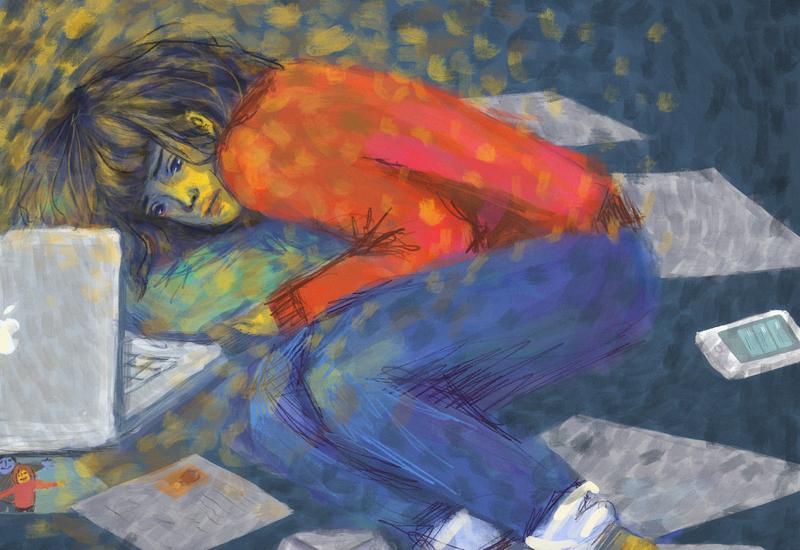 When I told my UBC-appointed counsellor that I no longer had time to be sad, she gently informed me that there was no way to expedite my grieving process. This was just about the worst thing you could have told a person with five classes and two jobs who was on the brink of their second total mental breakdown.

I had the first breakdown when I was told that one of my best friends had been murdered, and it lasted for over two weeks. During that time I stayed on the couch, spending days binging some Netflix series I can’t even remember and had nights where I couldn’t motivate myself to walk across the living room and into my bed. Time became a very fluid concept, and deadlines slipped away while emails went unread and unanswered. This apathetic lifestyle had been afforded to me by the holy grail of UBC: academic concession.

Being granted concession only took a few surreal, uncomfortable steps. The first was sitting in Buchanan D — a building that oozes misery — for over an hour waiting for an Arts Academic Advisor. The next was explaining to said Advisor that one of my best friends had died and that I was feeling more than a little sad about it.

“I’m sorry to hear that. In order to process this, I’m going to need to see an obituary or a death certificate.”

It was clear by the look on the Advisor’s face that she felt uncomfortable asking me this. Neither of us wanted to be in this situation, but it was more difficult for me. Since my friend had died less than a week ago, no obituary had been published. I was also not a family member or a weirdo so I didn’t have a copy of the death certificate in my pocket. But since she was requesting evidence, I pulled up an article on my phone written by the small-town newspaper where we both went to high school.

They were using his Facebook profile picture in the report; I had taken the photo and you could tell because he was sitting in my living room. She took this as valid proof that I hadn’t sat in their waiting room for the last hour as part of a depraved long con and approved my request for concession. However, the Advisor told me that there still wasn’t a guarantee that my professors would allow me to miss assignments or rearrange deadlines, but that my odds would increase if I gave them further evidence of mental anguish by attending counselling. I went home and drank whatever I had in my liquor cabinet, mulling over the idea of sitting in a room and crying with a stranger. It was definitely more uncomfortable than sitting in a room and crying alone, but the thought of one of my professors deeming me “not sad enough” and forcing me to take a exam that I knew I wouldn’t be prepared for was horrifying.

“How are you handling all of this?”

I told the counsellor that I hadn’t really had a chance to try and handle anything yet as I was too busy being worried about handling my degree. She told me about Kübler-Ross’ theory of the five stages of grief: denial, anger, bargaining, depression and acceptance. She said that I was still in the denial phase, to which I said that I felt pretty damn depressed and that I think I may have skipped an emotion or two. She told me not to think too much into it, to practice my calming breathing, and to make a follow up appointment for the week after the funeral.

This was my first breakdown. For the days leading up to the funeral, lying around and ignoring every responsibility had seemed like a valid method of coping with my emotions. My professors and employers had all been very kind, and I felt secure in my emotional insecurity. Then I got back from the funeral and the grief process got blurry. Theoretically, standing in a church with my high school classmates and getting “closure” should have propelled me from depression to acceptance. Yet, when I arrived back in Vancouver with Monday classes rapidly approaching, I couldn’t seem to budge from stage four. Time had snapped back into its usual linear focus, but the grieving process had taken over its fluidity.

So when the counsellor told me that I couldn’t lifehack my sadness and drive myself back into productivity, I elected to ignore her. I Googled things like “appropriate amount of time to grieve” and “how long to be depressed before starting work again.” I even read the wikiHow article “How to Cope With Grief (with Pictures),” and then deleted my browser history out of embarrassment.

I had reached rock bottom.

I flung myself back into my work with enough zeal to propel me through finals and make it to summer. However, I was exhausted. I still felt emotionally drained but it was too late to deal with it. I could no longer walk into UBC Counselling and check the box that said someone close to me had just died, and the timeline in which it was socially acceptable to be sad had ended.

It took time for me to learn that there is no socially acceptable timeframe for sadness. But it can start out as simply as reaching out and asking for help. I’ve found that the stages of grief are much less linear than Google may make them seem and by allowing myself to accept this, I allowed myself to begin the process of healing. I’m happy to report that this is a process I don’t plan on expediting.