The Knoll Protest changed activist culture on campus — a culture that has only grown with the explosion of the internet.
Written by
Charlotte Alden 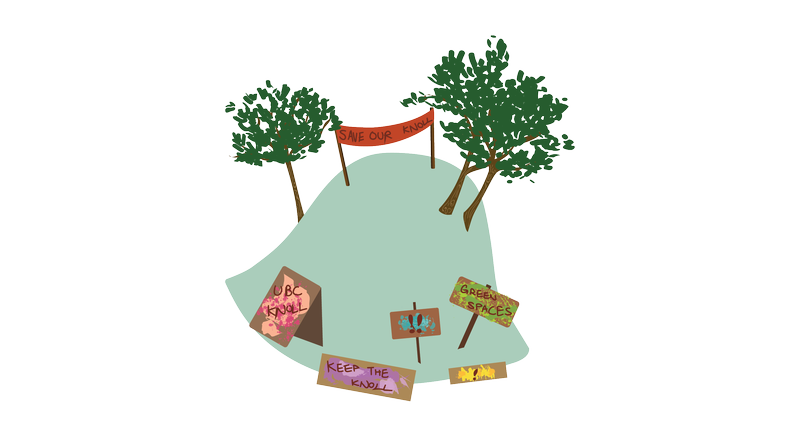 Ten years ago, 19 students were arrested in the Knoll protest, a demonstration where students demanded the preservation of the grassy hill outside the soon-to-be Nest. The protest worked: the knoll they were fighting to save still stands today.

This type of activism isn’t new on campus. Students have always protested at UBC, as the university itself was founded on protest. The Knoll protest did, however, change activist culture on campus — a culture that has only grown with the explosion of the internet.

“In 2018, protesting has become so oversaturated,” Free Speech Club Director Angelo Isidorou said. “... I feel like people are protesting over some issue every other week to such a degree that nothing really ever stands out, whereas with the Knoll protest, it really stands out because at that time I don’t think [they] were protesting to this degree. That’s why 10 years on, people are still talking about it.”

Sociology Professor Dr. David Tindall agreed that sometimes the number of protests can be overwhelming and demonstrations lose impact due to the “issue attention cycle”: the idea that “the general public and also the media to [a] certain extent, have [a] limited attention span for certain types of topics.”

“Something will be in the news or will be of interest for a period of time. But then, people kind of lose attention for variety of reasons,” he said. “Protest is very much like that.”

Internet activism with hashtags, notably the #MeToo and #BlackLivesMatter movements, has grown in prominence over the last few years.

According to Tindall, social media’s impact on protest culture both benefits and hinders society. “Social media plays this connector role. You can have people who at one point in time would have been relatively more isolated who are able to connect with one another on social media and … coordinate for things where that would have been much more difficult [before social media],” Tindall said.

As a result, Tindall explained that people with extremist ideas are more easily connected, resulting in those groups having a larger, more visible presence. He theorized that recent right-leaning protests on campus, including people protesting abortion and an anti-transgender protest that was quickly countered by LGBTQIA2S+ advocates, are potential examples of this new phenomenon.

It’s hard to say if that presence online directly correlates with any changes in society from those groups, though — or any group for that matter.

“We often assume that [if] a protest happened, some kind of change happens, and it’s a result of the protest, but it’s usually a lot more complicated than [that],” Tindall said. “It’s kind of hard to figure out whether protests actually lead to certain types of outcomes, because there’s a variety [of] things that could affect outcomes.”

Where does UBC stand on protest today and has its position changed in the last 10 years? Dr. Neil Guppy, senior advisor to the president on academic freedom, says no. In 1976, the UBC Vancouver Senate approved the Academic Freedom Statement outlining students’ right to protest. Since then, it has introduced a Respectful Environment Statement, ensuring mutual respect among people with different opinions and backgrounds.

On paper, UBC supports protest, but for some clubs it’s been harder to find a platform. According to Emily Leung, communication coordinator of UBC’s environmental activism collective UBCC350, UBC has made it difficult since 2013 for the collective to lobby the university to divest from fossil fuels.

Leung said that in the initial stages of their divestment protesting, the UBC Board of Governors (BoG) required UBCC350 to hold two referenda to prove student and faculty support for shifting investments away from fossil fuels.

“In the beginning, they had quite a lot of obstacles for us and it was pretty hard to voice our opinions through the channels that they provided us,” she said.

After the referenda, Leung said that “they continued to not really acknowledge the effect and students’ efforts. They kind of go with their own agenda.”

But over the years, she said that the BoG has opened up to the collective and allowed them to speak at meetings. In 2017, after four years of protesting, UBC finally voted for sustainable investment.

Shifting ideas of protesting and activism brought on by the increase of online interconnectedness have changed the way students choose to make their voices heard. But while the changes in the last 10 years have changed the protest culture at UBC, Guppy affirms that UBC’s position remains the same.

“Protest is part of what is accepted, expected activity on a university campus,” Guppy said. “That’s always been the case.”