Raging against the machine: what the evolution of UBC’s protests tells us about student activism’s future

The story of UBC’s student protests, their wins and losses, resources and institutional knowledge, provides a valuable lesson on the future of effective protest.
Shereen Lee 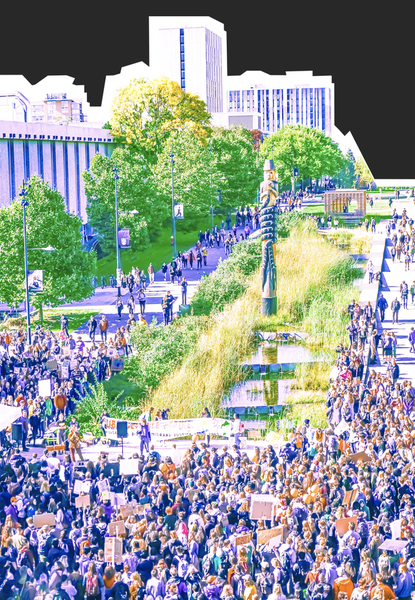 The wave of activism for the Black Lives Matter movement in 2020 felt like a moment in history. Over the last year, there has been a sharp burst of momentum in the UBC student space that has faded out nearly as quickly as it emerged. Issues of racial profiling, harassment and systemic inequity have become an uncomfortable, yet persistent, part of our campus’s legacy.

Large-scale protests, amplified by social media, have caught the attention of the UBC campus. But how can that attention be converted to real, lasting change?

One answer might lie in the story of how UBC’s student activist initiatives developed. The evolution of 20th-century student protests at UBC tells a story of an increasingly political student body — one heavily influenced by the moral conversations of the world around it.

The first instance of a documented UBC student protest was Alison Peeles’s letter in a March 1919 edition of The Ubyssey claiming that UBC’s relocation to Point Grey was underfunded by the provincial government. UBC’s location and development were controversial issues on a student and provincial level: BC had only assigned UBC to the Point Grey area in 1910, and much of the land granted was situated on unceded Musqueam territory. Government plans for campus were vague and slow moving.

Funds diminished further after the First World War decimated Canadian resources. Peeles’s 1919 letter was the start of student organizing for more funding for UBC. Delegations continually negotiated with the BC government for money and saw success in November 1922 when the province agreed to commit $1.5 million to university construction.

According to the AMS archives, that month, in what is now known as the Great Trek, over 1,200 students held a sit-in at the unfinished Point Grey campus to ‘lay claim’ to the land, dismissing the financial difficulties of the post-war Canadian situation and the fact that the Point Grey campus was on Musqueam territory. Resources like The Ubyssey disseminated information on how to participate in the protest, resulting in a targeted campaign that garnered the support of almost the entire student body.

However, social justice activism was not yet a part of mainstream university culture. When the province assigned 3,000 acres to the university in 1920 — the majority of which had been (and still is) claimed by the Musqueam people as their traditional and unceded territory — students were not recorded participating in the provincial conversation around Indigenous land rights.

Provincial and university administrations seldom acknowledged the historical presence of the Musqueam while the campus was being built. The province did not consider any territorial claims made by the Musqueam until the late 1990s, when the Supreme Court of Canada recognized Indigenous claims on territory with a landmark ruling.

UBC’s then mostly white student body followed suit. While plans for campus development were underway, The Ubyssey framed the University Endowment Lands as space “which once belonged to the Indians” in 1927, largely ignoring Musqueam territorial rights.

At this time, the university didn’t document any student activism throughout the ’20s and ’30s. This was the case even as Canada underwent significant turmoil following the Great Depression. A review of the 1935 student handbook shows no official clubs or societies dedicated to service or socio-political issues.

Instead, students continued to advocate for more building resources at UBC. This resulted in the construction of a Women’s Gymnasium in 1929, Brock Hall in 1940, an armoury in 1941 and the War Memorial Gymnasium in 1951. A ‘Second Great Trek’ helped obtain more financial aid for students at UBC. Students also spoke out against tuition increases, administrative decisions like library closures and non-public AMS meetings.

No Struggle, No Progress

Student attitudes shifted after the Second World War to include more conversations on social issues outside UBC.

Issues of race and immigration stirred by the war reached Vancouver in 1942, when 76 Japanese–Canadian UBC students were forcibly exiled following Canada’s declaration of war on Japan. These actions faced near-universal student reprimand and students began to speak out against anti-Japanese racism. According to AMS archive files, in a 1948 student parliamentary vote, 99 per cent of the student voters spoke in favour of full citizenship rights for Japanese–Canadian students. Japanese–Canadians and Indigenous BC residents were granted suffrage a year later in 1949, a victory in a wider civil rights movement in Canada.

The first social justice-related campus group The Ubyssey could find, the Civil Liberties Union (CLU), actively discussed the issues of xenophobia during World War II. Other clubs like the Social Problems Club coalesced to discuss prominent issues in global politics as the Korean War and Civil Rights Movement shaped national conversations in the early ’50s and ’60s.

Political conversations happening in the United States began to influence Canadian activism in the late ’40s. Minorities in Vancouver and other provinces established the Canadian League for the Advancement of Colored People, advancing professional success for Black jobseekers beginning in 1947 and 1948. Students similarly formed support groups for specific demographics and communities, including ethnic or cultural associations and international student clubs.

All of this was happening as UBC was becoming larger and more diverse than ever before. In 1948, the Musqueam Nation offered a totem pole as a gift to UBC, with the intent of indicating an evolved relationship with UBC, “one in which the university would welcome Aboriginal students to study and succeed on the same basis as others,” according to the First Nations House of Learning.

Though enrolment demographic data was limited until 2020 when UBC started collecting more detailed race-based data, the student population increased drastically over the next few decades. Around 5,000 students were enrolled at UBC in 1954. By 1968, there were 17,630 enrolled undergraduates, with marked enrolment increases in marginalized populations and international students.

Stick it to The Man(y)

At this point, activism in the United States was reaching fever pitch with protests against the Vietnam War, which had a profound impact on campus life. Canada never entered the Vietnam War and largely acted as a UN peacekeeper in other wars at the time. However, Cold War-era issues became prominent on campus as signalled by the impact of new organizations like UBC’s nuclear disarmament club. Canada would eventually achieve disarmament by 1985.

Students also participated in a close examination of university and AMS finances, especially in relation to protests against South African apartheid. These calls for divestment were part of a large wave of divestment initiatives across North America. The AMS intended to close its account with the Bank of Montreal in 1979 for loaning money to the South African government. However, when the bank threatened service charges of over $2,000, officers made the decision to maintain the account, stirring controversy among the student body.

Eventually, students began protesting the investments of the university itself as UBC revealed it had over $1 million in holdings tied to South African investments. Under pressure from groups like Students for a Free Southern Africa, UBC eventually opted for a policy of “partial divestment” in 1986, withdrawing exclusively from companies that did not adhere to Canadian business protocols.

When the early 1980s recession hit, many students were impacted by the economic fallout. Student protests turned inward as federal and provincial funding dwindled. For these protests, students participated in a range of smaller protests targeting specific issues, like cutbacks to Indigenous scholarships in 1987 which denied funding to nearly 40 per cent of qualified Indigenous applicants.

Five years of cutbacks to the university budget led to a 1983 province-wide strike in which students, civil servants, healthcare workers and other British Columbians participated. Undergraduates also participated in another round of protests regarding fee hikes as they rose 17 per cent in the face of government funding cuts during the recession.

Though student activism was strong, the financial difficulties of the recession made it difficult for students to enact lasting change with their protests. UBC saw millions of dollars cut as the federal and provincial governments reduced spending. As a result, they did not have the capacity to take in as many students as usual, which further exacerbated their deficit. The end of the recession eventually brought more resources back to UBC and a tuition freeze in the 1990s as the NDP took control of the BC legislature.

As life stabilized in the province, UBC students transferred their knowledge of early political protests to large-scale political activism at home. In 1997, students grew alarmed upon hearing the news that the Asia-Pacific Economic Cooperation (APEC) was planning to hold its Economic Leaders’ Meeting at UBC.

They voiced concerns that APEC, a body aiming to create free trade zones in the Asia-Pacific region, did work that would “have dire consequences for the environment and labour rights.” Invited to APEC were controversial leaders such as Indonesian dictator Suharto.

Calls for UBC to cancel the conference escalated. The RCMP arrested and pepper-sprayed some students who participated in protests. The protests culminated in a 3,000-student rally outside Koerner Library and a promise from then-UBC President Martha Piper that the student body would be consulted before the arrangement of any future conferences with APEC.

The politicization of UBC students put more attention on the specific needs of the student body. The AMS recalibrated its funding and offered more support to a diverse range of student social causes by creating the AMS Resource Groups in 1997. The groups offered a larger umbrella for AMS organizations like the Women’s Centre and committed to adding newer committees like the Social Justice Centre.

Early stages of activism were focused on issues of funding for a new and undeveloped university. But as the school gained its footing as an institution, students began to look toward the issues that the rest of the world cared about. They conducted awareness campaigns and eventually began to see UBC as a place to enact change, both on a larger level and to make campus a better place for marginalized students.

Many of the issues that UBC students advocated for are no longer a part of campus discourse. Yet, the changes these students instituted through protests on nuclear disarmament or South African divestment have built frameworks that are already helping us navigate the world of campus activism today. The local resources that UBC alumni built and negotiated, from diversity policies to AMS resources, continue to give activists a foundation on which to work.

The story of UBC’s student protests, their wins and losses, resources and institutional knowledge, provide a valuable lesson on the future of effective protest. The issues we fight for today, from climate change policy to race and gender equity, can learn from the strategies and institutional memories of successes in the past.

While individual protests might not turn out immediate results, the history of UBC activism shows that grassroots initiatives have the power to enact systemic changes — many of which can occur years after the protests have begun. From the Great Trek in 1922 to the anti-APEC protests in 1997, large demonstrations of student sentiment have had a record of yielding results. But behind these demonstrations are the months and years of sustained organizing efforts which unified the student body and clarified activist intentions.

Activists of the past 20 years have already been mobilizing to institute radical socio-political change, in the tradition of protesters of the past century.

From the adoption of awareness campaigns like Orange Shirt Day to a climate strike with over 4,000 participants in 2019, protests have continued on, with advocacy for institutional support, revolving around major issues in society.

As advocacy rapidly shifts to a digital focus in the age of the pandemic, today’s protesters are faced with the challenge of using media to create sustainable campaigns that extend beyond the boundaries of our campus.

— With files from Sheldon Goldfarb and Simone Richler