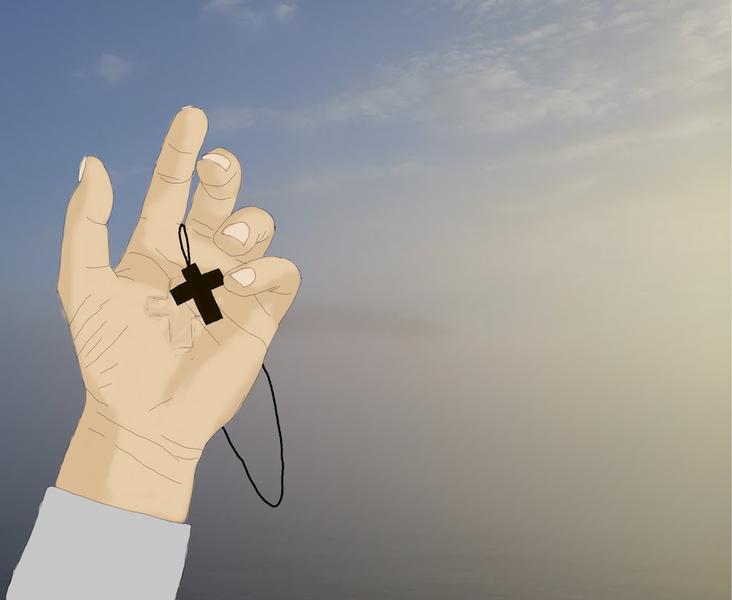 His back was smooth and unmarred; his dark hair styled with not one strand out of place. I felt his lips turn upward.

“Let’s get out of here,” he breathed into me.

I slammed my lips against his and his back hit the cobblestone wall. One of my hands was in his hair, trying to unleash it so I wouldn’t be the only messed up thing on the street. The other was clenched around the cross I wore around my neck.

I’m going to Hell, I thought as I started to smile.

My earliest memory of church was when I was nine or ten. We went to Midnight Mass – my then married parents and I – and we sat next to the aisle on the wooden pew. It creaked whenever I shifted my weight from one hip to the other.

“Don’t sit there all bundled up,” my mom had said, but I kept my jacket on anyway. I was cold that night.

We were early, so people had just begun filing in. We pretended not to notice the irritated glances aimed our way as we made them maneuver over and around us to get a seat on our pew. I was not giving up my aisle spot.

I only remember that I was bored. And afraid – afraid I’d go to Hell for being bored in church on Christmas Eve. I didn’t want to go to Hell; I wanted to go home.

I did remember being taught a prayer, though, to say right before dinner. It was almost Christmas, after all.

God is great. God is good;

Let us thank Him for this food.

By His hands, we are all fed,

Give us, Lord, our daily bread. Amen.

We stood there, against the wall, until the street light flashed on above us – until we were spotlighted like actors on a stage. I was awake. This was real.

And yet I stepped back. We stared at each other, both of us still breathing heavily. His cheeks were flushed, his pupils dilated. Half of his shirt was no longer tucked in and one cuff was unbuttoned, the fabric swaying with his now freed hair in the cool breeze. The disheveled look only made him hotter. Fuck.

He moved to follow me but I shook my head. His grin faltered when he realized that I would be leaving alone.

Except he left first.

And there I was, standing on a deserted street corner with a greasy hand and an imprint of a cross in my palm from holding it just a bit too tightly.

That was what I remembered of my second kiss. My first, I didn’t remember at all.

No warranty. No returns.