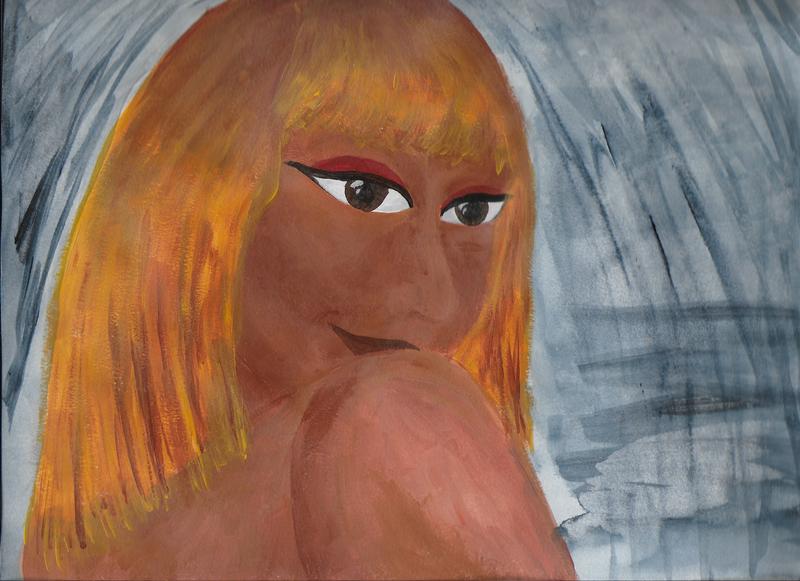 This is a gruelling moment in our lives, he thinks as he sidles up beside her.

He had been walking behind her for two blocks, slowly gaining on her. He knew, if she didn’t turn soon, he would have to pass her; now here it is.

She smiles over her shoulder, taking him in at a glance.

I feel like I’m following you, he thinks, laughing in his head. I’ll pull comfortably ahead in a few seconds.

More like a full minute, at this rate, she thinks. That is, unless I have the heart of a street-side martyr and slow my pace.

Would you do that, for me? he thinks, smiling back at her. They are matched now on the skinny sidewalk.

I could, she thinks, giving him a playfully imagined shove. Or, I could anticipate this social sacrifice and decide to ignore it. I’m a busy girl, you know. I can’t slow down for every handsome Joe walking my way.

So, he thinks. You think I’m handsome. He looks over at her.

Her eyes roll up to the treeline. That’s called selective hearing, she thinks. A male epidemic.

He sniffs. You’re not so hard on the eyes yourself.

Aren’t you just a young Casanova, she thinks, but her cheeks consider reddening slightly. Their shoulders brush going past a protruding hedge. Don’t think I’m going to change my pace for a few sly thoughts, she thinks.

He inhales the brisk autumn air. I wouldn’t want you to, he thinks.

They reach an intersection.

I guess so, she thinks. The light changes. She walks.

He watches her cross the street and hop the curb. He thinks about running after her. Imagines sprinting into traffic, cars screeching and a chorus of horns. He thinks about waving absent apologies while darting between strangers on the sidewalk; about her hair beneath that white wool beanie from behind, breath billowing into delicate clouds. He thinks about touching her arm; her looking up at him with that smile, as if she was thinking about this too. He would tell her he couldn’t let her go, not without getting her number; notice how she combs her bag with a forced calm, producing a little white Graphic Designer business card, half creased, and how he takes it, between his index and middle finger, and tips it in the air.

I’ll call you, he says. His words puff white with each syllable. A lady on the corner glances at him. He misses his light.

He thinks about looking for the girl up the street. That would look dumb, he thinks. He’s not that desperate. He does glance back though, while crossing the road. The sidewalk is a crowd of dark shapes.

Not that desperate, he thinks.

Maybe I should be.