It can take up huge chunks of your time, drain your energy and put you in close proximity with difficult people. No, I’m not talking about group projects.

Commuting is a part of many UBC students’ routines, with two out of three UBC students being commuters. Sadly, spending hours in a bus can easily become a dreaded part of the day; and unless we’re able to get a direct SkyTrain to campus, the trek will continue to be as arduous. Here are just a number of ways you can make the most of your commute to UBC.

All aboard the express train

Out of all the buses going to and from UBC, the 99 B-line offers the most frequent service. From 3 p.m. to 6 p.m., a bus will arrive every three minutes. The 99 is also a convenient option later in the night. Even at 9:30, there will be a bus leaving campus every seven minutes or so. Unfortunately, going along on Broadway — one of Vancouver’s busiest streets — often means that the bus is quite packed. Many stops will see masses of people entering and exiting the bus, taking up more of your time.

Out of the three routes featured in this article, the 43 has the lengthiest journey, covering a total of 19.3 km. Despite the distance, it is fairly quick, sometimes only taking 44 minutes from Joyce Station to UBC.

The 84 has one of the quickest commutes of all the bus routes. At its longest, the journey will be about 39 minutes, whether you are going towards UBC or VCC Clark Station. The 84 can be less crowded and noisy than other buses, which gives you a higher chance of both nabbing a seat and resting somewhat peacefully. It also comes quite frequently, with buses heading to campus arriving every six to seven minutes from around 3 to 5:30 p.m. 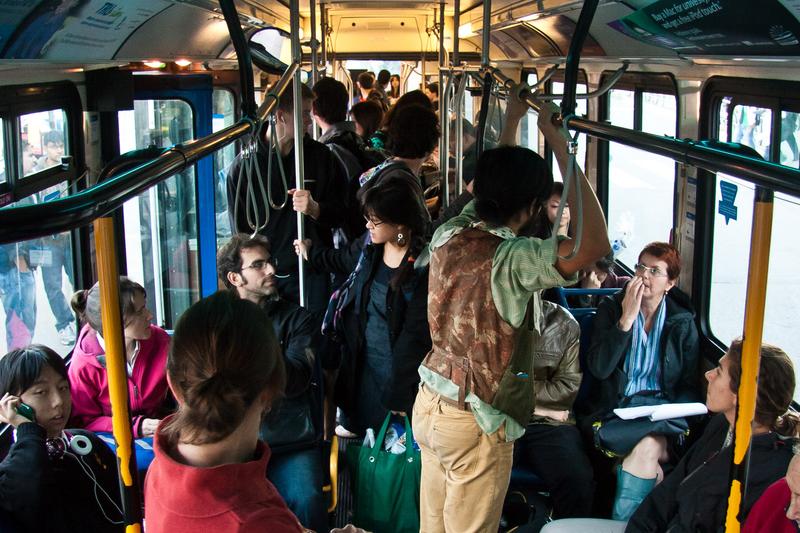 Temporary relief for your pain

Music is one of the best time-passers for any commuter — you can afford to forget your notebook once in a while, but never your headphones. Why not listen to tunes that could get your mind ready for a full day of school? Studies from Duke Cancer Institute have shown that classical music can lessen anxiety and boost mental concentration. Just don’t blare the Beethoven symphony at full volume — your fellow commuters might not appreciate it.

Sleeping on the bus is rarely comfortable, especially when your socks are soaked and you’re sandwiched between arms and elbows. But taking a nap during your commute might actually be a good way to stay productive later on. Researchers have shown that 60 to 90 minute naps in the afternoon can be as beneficial for the brain as sleeping for eight hours at night. Of course, your backpack won’t be as plush as your pillow, but a siesta during your commute could improve your mental capacity later on in the day.

On the odd commute that you do feel refreshed and energized, you could use that time to get ready for your day. If you’re a keener like me, you could use the return trip to do a mental review of the material that was just talked about in class. Or you could catch up on the daily news and emails, staring intently at your phone the entire time as to avoid making multiple eye-contacts with the same person who has been sitting across from you for an hour.

If another bus pass my stop without stopping

Biking might only be a tad slower than taking the bus depending on how packed it is with students, so you could be multi-tasking quite effectively – commuting, exercising and cutting down carbon emissions.

To shield yourself from the torrential rain during the school year, wear specialized riding clothes or carry a separate change of clothing. It might also be a good idea to pack up an extra meal, as the exercise will be sure to get you hungrier than usual.

With UBC located right beside the ocean, it shouldn’t surprise anyone that boating could be used as a commuting method for UBC students. While I haven’t seen anyone lugging a kayak down Main Mall, commuting on the waterways has been a viable option for people around the world, including a man who kayaks to work along the River Thames.

But make sure to take the study course and exam before you sail out, since boating without a license could lead to fines and penalties.

Perspectives: How to deal with eco-anxiety