How UBC's buildings are adjusting for a greener future

Globally, infrastructure and construction account for 39 per cent of total carbon emissions, presenting one of the largest challenges and opportunities in mitigating the climate crisis. With over 415 institutional, residential and mixed-use buildings housing over 12,000 people on campus, UBC’s infrastructure is currently a significant contributor to the climate crisis.
Rithikha Rajamohan 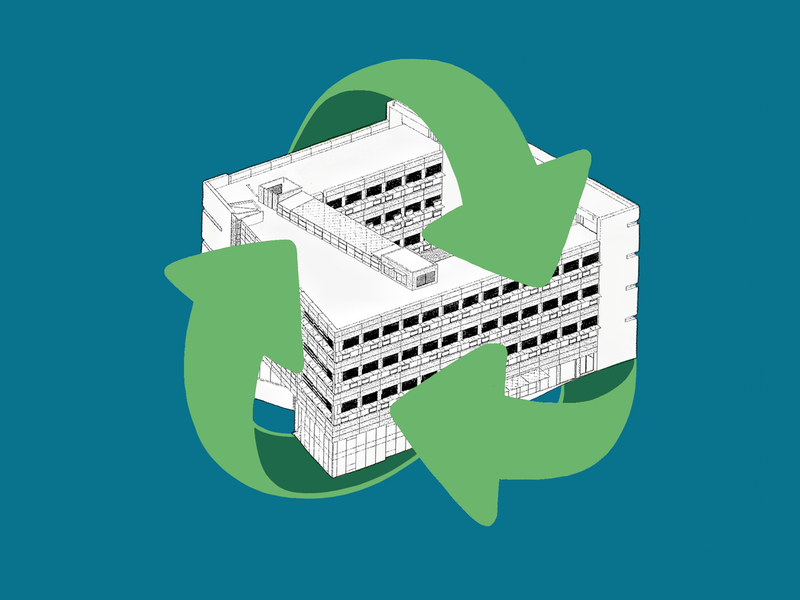 UBC is striving to curb the environmental impact of its infrastructure through a far-reaching action plan.

Working to expand the university’s sustainability mandate into all areas of its operation, UBC adopted an ambitious new set of guidelines in 2018 called the Green Building Action Plan (GBAP). Acting as a roadmap of goals, targets and action items, the GBAP takes a holistic approach to sustainability. Its goal is to transform UBC’s buildings to make positive contributions to human and natural systems by 2035.

Globally, infrastructure and construction account for 39 per cent of total carbon emissions, presenting one of the largest challenges and opportunities in mitigating the climate crisis. With over 415 institutional, residential and mixed-use buildings housing over 12,000 people on campus, UBC’s infrastructure is currently a significant contributor to its total carbon emissions.

Of UBC’s total 37,941 tonnes of carbon dioxide released in 2018, 36,606 tonnes came from its buildings, according to the university’s 2018 Carbon Neutral Action Report. Over 70 per cent of this figure came from the university’s core buildings, mainly through their use of natural gas and light fuel oil for power and heating.

These figures are an improvement over 2007’s 41,436 tonnes of building-related emissions, lowering emissions by 37 per cent over ten years. However, it’s still a ways away from UBC’s goal of a 67 per cent reduction of emissions since 2007 by 2020.

Feeling that past sustainability efforts have been too narrow in scope, the GBAP takes a multi-disciplinary approach to achieve its vision of a net-positive impact campus.

“These things aren’t intended to be isolated. They’re intended to be holistic in how we think about [them],” explained John Madden, director of sustainability and engineering at UBC Campus and Community Planning.

A number of guidelines and metrics exist to help guide the integration of these components into new building designs. Among these are the passive house-certification standard and the climate-ready building guideline.

The climate-ready building guideline asks designers to integrate responses to challenges posed by future climate scenarios into their designs, while the passive house-certification encourages the use of passive solutions — those which require no energy inputs to function — in order to address these challenges.

Historically, most Vancouver houses require heating due to the climate. However, with future temperatures expected rise to 2.5 degrees Celcius by 2050, a surge in cooling demand in the city is expected.

“Our fundamental philosophy in this plan is to maximize those passive design measures in building-design optimization,” said Madden.

In the context of future cooling-dominated circumstances, this means using passive designs that optimize window-to-wall ratios, using higher-quality insulation, orienting the building according to incoming solar radiation and using vegetation to increase shade.

The university is also considering active energy solutions such as the use of solar panels. Evolve, an upcoming staff and faculty housing project, is expected to have solar-absorption technology integrated into its design.

“There is very rarely only one aspect that we’re looking to improve,” explained Sanguinetti.

“We look to improve seismic performance, energy performance and really fundamental to the university is the performance for the occupants in terms of teaching and learning spaces or research spaces,” she continued.

To get the plan approved, a financial analysis was conducted to identify economic benefits and losses associated with a series of climate-adaptation and building-efficiency measures.

“We had to be incredibly thoughtful to generate a positive business case as to why it’s important to make these initial investments,” said Madden.

Buildings, over their long lifespan, have costs associated with daily operations. The results show that renewals and new buildings that follow the guidelines set by the GBAP are expected to offset these costs due to savings from reduced resource consumption. What’s more, these savings could be realized within five to ten years of a green building’s operation.

It’s also in the university’s economic interests to reduce its carbon emissions due to provincial carbon taxes. Reducing its carbon liabilities can result in further savings, which Madden says can come full circle and be put back into maintaining campus spaces.

Current financing for the 15-year GBAP occurs incrementally through the UBC 5-Year Capital Plan (2020-2025) which is partially funded by the BC Ministry of Advanced Education, Skills and Training (AEST).

Retrofitting has economic and environmental advantages over the demolition and construction of new buildings, which are usually more expensive and result in massive amounts of material ending up in landfills.

AEST currently matches UBC’s anual funding for retrofitting buildings in a 75 to 25 per cent split. The province currently provides 75 per cent of approximately $50 million — about $38 million in funding, which UBC is then required to top up by 25 per cent or $12.5 million through matching funds.

“It’s a really good deal for UBC because we get these improvements that improve on so many aspects of the building’s performance, for users, for operators, for the environment, and we’re only paying 25 per cent of the cost,” said Sanguinetti.

A focus on climate

UBC is on track to reach a 62 to 63 per cent decrease in greenhouse gas (GHG) emissions by 2021 which is one year behind schedule and just under the 67 per cent emission reduction target set for 2020.

“We’re just starting off a process that will be kicked off in the new year around how we more aggressively [accelerate] to our 2050 target of net-zero emissions and that’s the challenge that faces us today,” said Madden.

However, even if energy consumption is shown to be reduced using these metrics, this doesn’t always translate to a reduction in GHG emissions. In fact, GHG emissions may remain the same or even increase depending on the energy source being used.

To address this, Madden says a new evaluation metric is in the process of being implemented this year.

Looking ahead, a number of different retrofitting and new building projects are in the proposed pipeline for completion. New buildings include Evolve, the Gateway Building, the School of Biomedical Engineering, the Mathematics Building and an expanded chemistry laboratory complex.

Buildings identified for renewal and expansion include the Douglas T. Kenny psychology building, the School of Music, the Institute for Computing Information and Cognitive Systems and Forest Sciences Centre.

While the GBAP’s overall vision and long-term goals have largely remained the same since its approval in 2018, Madden explained, that moving forward there will be a much greater emphasis on components of the plan directly related to climate.

“We will always look at synergistic opportunities to advance every component of the green building action plan, but the focus is on climate change, climate mitigation and climate adaption.”