Balancing Faith and Education: The Muslim Experience at UBC

For many Muslim students, the problems at the crossroads of UBC and their faith lie not within blatant racism and rude remarks from passing students, but from a lack of advancement in the accommodations present in the very structure of the university itself.
Arumann Dhillon 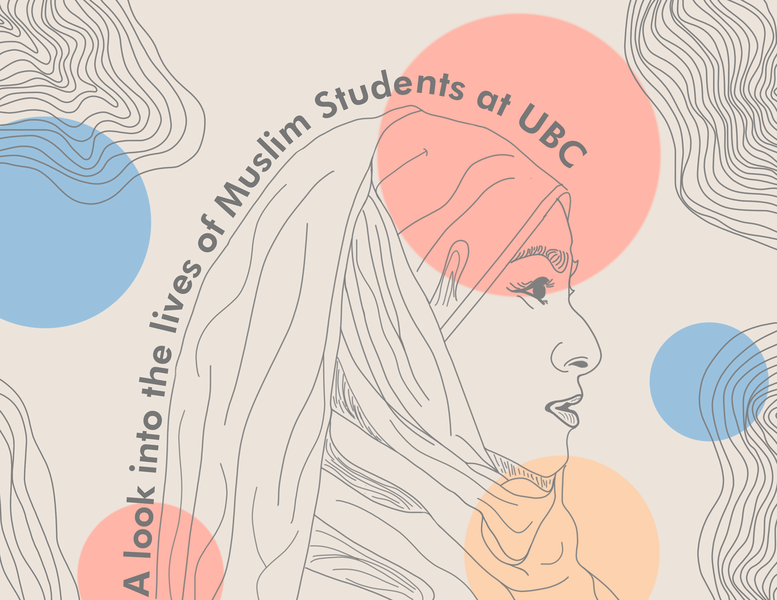 Salma, a third year arts student who wears a hijab, feels “implicit twigs” of racism, in the form of sly comments while on campus, but denies “being exposed to straight-up racism.”

“Just the fact that I’m wearing my hijab may imply that I’m more practicing,” Salma said.

“I feel like some people are walking on eggshells when they're talking to me, especially when we're talking about … subjects like politics and religion.”

“Obviously everywhere you go there’s going to be people who are prejudiced … but UBC hasn’t been worse than anywhere else,” Kabir said. Overall, she’s found the school and the people in it to be polite and accommodating.

In the UBC 2019/20 Wellbeing Annual Report, only 65 per cent of undergraduate students at UBC reported that their beliefs, identity and experiences were valued by the university.

“I would say that my experiences on campus have been pretty positive,” a third year student, who asked to be anonymous, said. “I've been fortunate not to have any negative experiences with other people on campus.”

UBC’s Discrimination Policy defines discrimination as “intentional or unintentional conduct, which can be individual or systemic, that imposes burdens, obligations, or disadvantages... on specific individuals or groups,” and promises severe consequences for any individual or organization that partakes in it.

For many Muslim students, the problems at the crossroads of UBC and their faith lie not within blatant racism and rude remarks from passing students, but from a lack of advancement in the accommodations present in the very structure of the university itself.

Fasting on a full exam schedule

The students would like to see more resources from UBC to make it a more welcoming place for Muslim students. Observing periods of fasting while studying can be troublesome, Salma admits, but it doesn’t mean it isn’t possible.

While, this year’s exam season begins on April 18 and ends on April 29. Ramadan, a period of fasting from sunrise to sunset observed by Muslims, runs from April 12 to May 12. The ten day overlap between these events could create issues for Muslim students as they look ahead to their exams this term.

“Now that [Ramadan] is going to be during classes and exams and [final] assignments, it’s going to be interesting if my grades get affected,” Salma added.

According to UBC Equity and Inclusion office’s website, instructors are supposed to provide opportunities to make up work or examinations that fall on holy days, if a student notifies them in advance.

Resultantly, with this religious accommodation in place, students participating in Ramadan have to inform their professors to ensure that their exams are completed at alternate times that are more suitable.

“It’s just like being in high school,” Salma said about balancing Ramadan and school. “[It’s] really hard, but you can maneuver your way around it.”

Hands (and options) off of JamJar

Food is another challenge for Muslim students on campus, Kabir said.

On top of balancing faith and education, many Muslim students also only eat halal meat in addition to abstaining from alcohol. In order to aid students eating in the dining hall, UBC provides a small halal symbol on the menus next to any dish that is halal compliant.

The third year student agreed that navigating UBC’s food options can be difficult. While she pointed out the difficulty of the task, she would like to see UBC include more than just halal meat information.

“[UBC should be] more open about certain dietary things, if a product has gelatin in it, or alcohol of some form, it would be nice if they could disclaim it,” she said.

Jamjar Canteen, a Lebanese restaurant on campus, has a variety of vegan and vegetarian options and caters to halal diets, but Kabir said that eating there frequently can become expensive.

“Jamjar is great but it’s too expensive to have a couple times a week. Some of the other [Halal-friendly] places are just so out of the way from everything, so if you wanted it, you’d have to walk in a completely different direction,” Kabir said.

Livin’ on a prayer (space)

In Islam, the practice of Salat, a prayer that occurs five times per day, is obligatory. Salat occurs before sunrise, around midday, late afternoon, after sunset and between sunset and midnight. These prayers are most often conducted in a prayer space, in which individuals may rest, pray and reflect on their experiences.

Matthew Ramsey, the director of UBC affairs, confirmed that, last fall, UBC spoke with Muslim students groups “to provide an estimate of how many students from their respective groups could be potentially returning to campus and would be looking to use prayer spaces on campus, should spaces be reopened.”

“There was also a university-wide consultation process in 2019, which culminated in recommendations for improving accommodations with respect to the religious, spiritual, cultural practices for faculty, staff and students; considerations about space was central to that,” Ramsey said.

Although many services at UBC have been put on a hold as a result of COVID-19, students said providing safe spaces for prayer for Muslim students is essential to student wellbeing on campus.

“A prayer space is a safe haven for so many Muslim students,” said Salma. “It’s somewhere I can take a breath, reflect on my day and my faith, and just relax.”

Previously, a single prayer space was available for Muslim students in Brock Hall. Although appreciated, the space was “really really small and in an inconvenient place,” Salma said.

Brock Hall, located near the Buchanan buildings, was easy to access for most Arts students, but problematic for a large portion of the Muslim student community enrolled in other faculties. With ten minutes between classes, Salma explained that some students might not have time to say their prayers and get to class on time. With Brock Hall demolished, Salma is concerned about the lack of accessible prayer spaces.

In a 2019 UBC press release, Tracy Wideman, UBC’s director of partnerships in the Equity and Inclusion Office, said it was important for the university to “consider and embrace this part of people’s identities and self.”

“For some campus community members, spirituality is deeply tied with their sense of well-being and belonging, and it can also be such an immense resource in times of difficulty and crisis,” she said in the release.

Ramsey confirmed that plans were in motion to reopen prayer spaces. “The spaces will be opened as soon as [the current health] guidelines are relaxed and allow the university to do so.”

The tradition of Jumu’ah, the weekly Friday Prayer meant to be conducted in a large group, was previously held in the Marine Drive Residence Ballroom, but has been suspended until further notice as a result of COVID-19. Students said that this lack of accommodation forces them to conduct their prayers, something meant to be a peaceful and introspective action, in public places where they are often asked what they are doing, interrupted, and made uncomfortable.

For the future, Salma hopes for “a larger and more central space or even like several smaller spaces that are scattered around” so that students from different faculties may be equally accommodated.

The third year student also suggested opening up smaller, but more easily accessible spaces throughout campus. “I just wish they had one or two more open, just for ease of access,” they added.

Some Muslim students, whether or not they wear a hijab, have been able to find support in the form of clubs or groups or simply by befriending other Muslim students. The Muslim Student Association (MSA) on campus has helped many Muslim students connect.

“[MSA club members] can relate to you on a level that people outside of that group cannot,” Salma explained.

For Salma, having other students to pray with is a form of community.

“Just knowing that there are a group of people on campus that are like me is nice. And I feel like it gives me a sense of community that I wouldn't have had otherwise if I wasn't a Muslim,” she said.