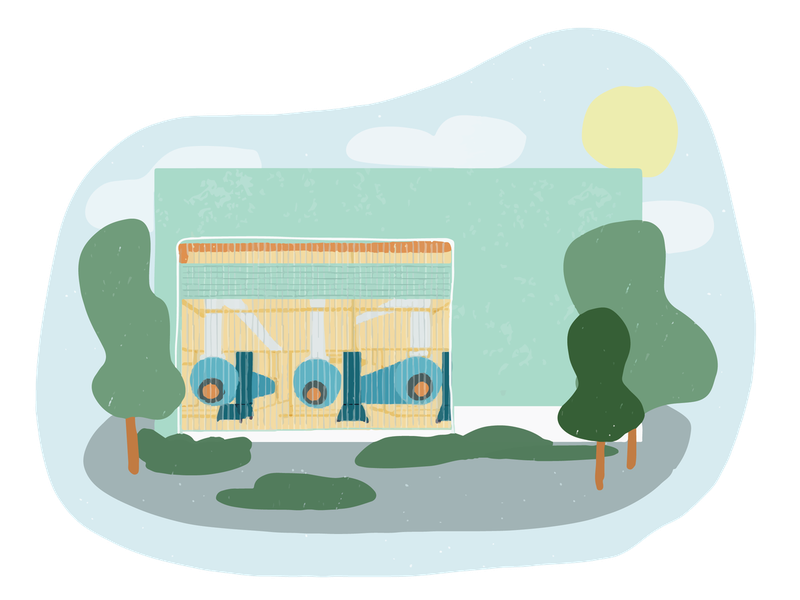 UBC gets a large percentage of its power and heating from clean energy projects like the Bioenergy Research Demonstration Facility (BRDF) and Campus Energy Centre (CEC).

The two projects help UBC further its climate action plan, working together to both power the campus and help meet UBC’s target of reducing greenhouse gas (GHG) emissions by 67 per cent by 2020.

They function via the Academic District Energy System (ADES), which replaced 14 kilometres of 90-year old steam piping and connected over 160 buildings to a new, more efficient hot-water system.

The BRDF is a bioenergy facility that processes renewable biomass sourced from urban wood waste to generate thermal energy for heating campus buildings. It is also a vital part of the campus’s sustainability and academic efforts as a Living Lab Initiative. Living Labs are research concepts which integrate private parties such as academics, students and companies with public institutions like the university and its facilities, in hopes of creating knowledge and community.

The CEC is UBC’s $24 million state-of-the-art hot-water boiler facility, which is able to meet all of UBC’s heating requirements. The CEC is the primary energy source for the new hot-water district energy system. The conversion from steam to a hot-water system first began in 2011, and in June 2017 the old steam plant was finally turned off.

David Woodson, UBC’s managing director of Energy and Water Services, has been a part of the projects since 2006. He said that at the time they knew “something was coming to BC,” referring to the possibility of carbon pricing.

“We started down a process of what we called our alternative energy study to say ... Before we spend money [on] the existing plan, is there another way to do what we’re doing?” said Woodson.

According to Woodson, Energy and Water Services sourced three initial ideas from a study that weren’t ideal for their plans. Interestingly, all three ideas required UBC to have a hot-water loop on campus.

The initial ideas all had jurisdictional issues and significant regulation issues, such as connecting the campus to the surrounding ocean for energy or running a one kilometre pipe to transport waste energy under the Fraser Valley River and then transporting the heat to campus. However, the inclusion of hot water had a clear business case. It was within the university’s jurisdiction to support their desire of reducing GHG emissions.

With the need for alternative energy, the BRDF was a compromise between a full-scale bioenergy plant and a feasible way for the university to reduce carbon use while providing academic opportunity. During the planning stage, the BRDF garnered the support of faculty and student environmental groups through Energy and Water Services’ efforts to include community feedback.

The BRDF “create[s] a space [for research] to take place on something that could have a big impact on society,” said Woodson.

How to run on sawdust and steam

The BRDF uses biomass in the form of chipped, clean wood waste from furniture manufacturing, sawmill residuals and municipal trimmings. Biomass is gasified to produce a clean synthetic gas (syngas), which is combusted into flue gas to generate steam for heating campus buildings.

A precipitator filters the particulate matter from the flue gas, after which it is released into the atmosphere. Syngas fuels a cogeneration engine that uses a mix of natural gas and renewable natural gas (upgraded biogas) to generate electricity and heat through the ADES.

Overall, the CEC and BRDF currently source 50 per cent of the ADES hot water per year.

Clean energy projects at UBC have many benefits outside of saving money — they are more sustainable and allow for community interaction.

The CEC saves the university $5.5 million in operational costs and $3.4 million in actualized savings annually, but its biggest saving is water. The new hot-water system is by far the biggest water conservation project at UBC and has allowed for a 22 per cent reduction in UBC’s carbon footprint from 2007 levels.

The BRDF has annual fueling and operational costs of $3.7 million. However, it saves UBC $800,000 a year in operational costs and generates additional income. It has also reduced GHG emissions by 14 per cent compared to 2007 levels.

As a Living Lab Initiative, much research into the process of bioenergy production, sourcing and processing have been undertaken at the BRDF, especially by the UBC Biomass and Bioenergy Research Group (BBRG).

“When the project first started, the researchers were interested in the energy content of the wood supply. And so they would take a sample bag off every load to analyze what its energy content was,” said David Woodson.

This process allowed the facility a complete breakdown of fuel content, enabling them to ensure the best wood biomass.

“It is very important to have clean [fuel] because we are operating within a city and we don’t want to introduce toxins [to the atmosphere],” said Dr. Ehsan Oveisi, a member of UBC’s BBRG.

He noted that precautions like sampling prevent the facility from having to shut down temporarily from low-quality wood chips and ensures cleaner energy.

Dr. Anthony Lau, an associate professor with the BBRG, added that “carbon dioxide from biomass is generally considered carbon neutral.”

But members of the scientific community argue that this neutrality is conditional, highlighting the GHG emissions accrued from sourcing and shipping biomass internationally and the time lag between burning wood biomass and the growth of new trees.

UBC is currently undergoing a $20.4 million expansion of the BRDF, with $7.6 million in federal help, to cut natural-gas use and reduce GHG emissions.

The university intends to use the federal funding to install a new 12 MW biomass-fuelled hot-water combustion boiler.

“Once the new boiler is operational, the BRDF will increase its heating production capacity to 20 MW and will provide up to 70 per cent of annual thermal production for UBC’s hot-water district energy system, halving its current dependency on natural gas, eliminating an average of 14,500 tonnes of CO2 greenhouse gas emissions on an annual basis, and saving more than $1M in annual operating costs,” said Media Relations Director of University Affairs Matthew Ramsey in a written statement.

This change could reduce the campus’s need for natural gas, which Ramsey wrote would “[improve] the university’s operational resilience.”

Part of this expansion will be used to meet operational drawbacks. Woodson expressed that he would like to make the truck-unloading process safer by creating a designated zone that does not cut into the path of pedestrians. Additionally, they would like to decrease the unloading time from 45 minutes to 15 minutes.

These projects could be key for UBC to meet their goal of reducing GHG emissions by 100 per cent by 2050.